With the rising popularity of styles from the 1960’s championed in the media by shows like Mad Men and the ill-fated Pan Am, it’s not surprising that the watch industry is bringing back updated versions of popular Don Draper-esque ’60s watches.  Vulcain Watches with their famous Cricket Alarm watch are making a comback.  Audemars Piguet’s Jules Audemars Extra-Thin and Girard-Perregaux’s 1966 line certainly pay homage to that era’s timepieces.  Hamilton has even resurrected the Thin-o-Matic name as a 42 mm watch in their Timeless Classic line. 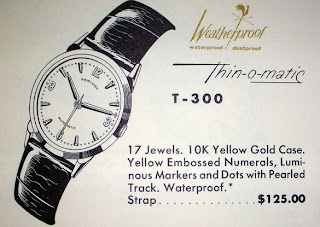 With all of the interest in 1960s look-alike watches, why not go for the real deal?  Vintage watches from the ’50s and ’60s have a certain charm and style not present in their modern day counterparts.  Part of that could be because they aren’t huge.  The current Thin-o-Matic is 42 mm in diameter while the originals are only about 33 mm.

The original Thin-o-Matics were also pretty cutting edge.  They featured a Buren Micro-Rotor movement making them among the thinnest self-winding wristwatches of the time.  Hamilton saw such success with the micro-rotor movement that they bought Buren in 1966.  That movement was a big leap forward technologically and paved the way for the Chrono-Matic and the movements used by Heuer and Breitling.

The Thin-o-Matic came in a variety of styles, cases and metals.  This particular one is from 1967 and is powered by the 17 jewel Buren Micro-Rotor movement.  The 14k yellow gold case is 33 mm in diameter, small by today’s standards.  There is something special about a watch like this.  They always have a story and a history. 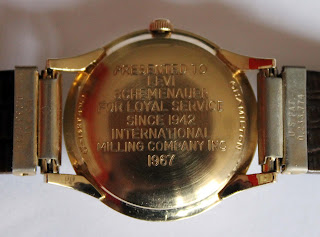 This watch was presented to a man named Levi Schemenauer in 1967 for 25 years of employment with the International Milling Company back when the 25 year gold watch was actually a gold watch.  While I like the new retro watches (I even have a few), no new watch, no matter how 1960s looking will have the history of a great vintage piece.

So, if your looking for a great 1960s-ish watch, take a look at the genuine article.  A solid gold vintage Hamilton Thin-o-Matic will run you about $300 to $500 depending on condition, age, etc.  The gold-filled models will be a bit cheaper.  They’re a great addition to any collection.

Zenith El Primero Lightweight: A Lighter Side of
prev next