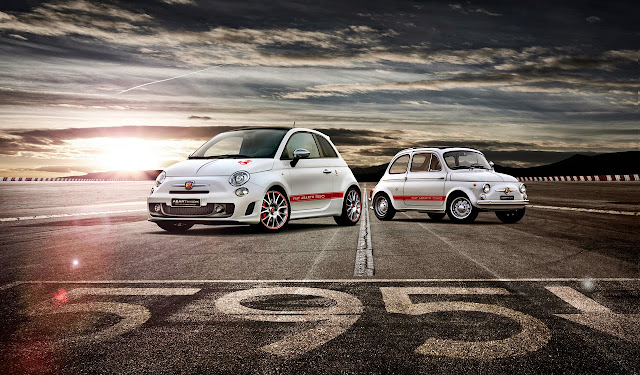 Man, 1963 was a packed year.  The birth of the Porsche Carrera, the Tag Heuer Carrera, Lamborghini, McLaren and the Rolex Daytona are just a few momentous firsts from that year.  Apparently, 1963 was also the year Abarth debuted the 595 at the Turin Motor Show.

To celebrate, FIAT created the Abarth 595 50th Anniversary Edition.  Basically it’s a FIAT 500 Abarth that’s been fitted with oh-so-much-more fun.  Here’s what you get… 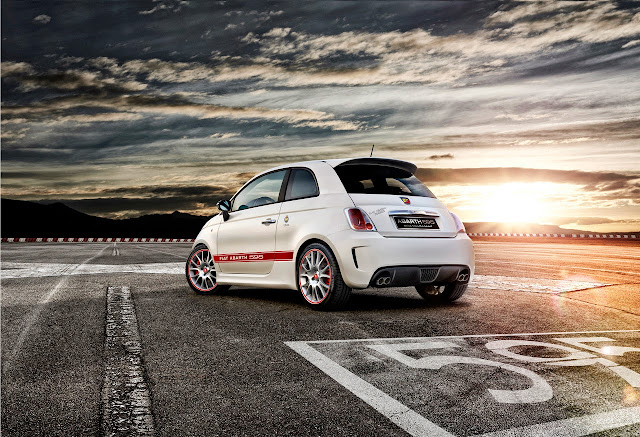 Production of the Abarth 595 50th Anniversary Edition is limited to 299 units.  No idea how many will make it to the US, but that’s how many there will be total.  Each of those 299 cars is powered by a 180 horse 1.4 liter T-Jet engine routing power to the wheels via the six-speed Abarth Competizione gearbox.  That’s 20 horse more than the standard Fiat 500 Abarth.  Acceleration from 0-60 mpg should take somewhere around 6.7 seconds or so.

There is no mistaking the Abarth 595 50th Anniversary Edition for a normal Fiat 500.  The gigantic red Abarth scorpion logo on the hood and shiny Fiat Abarth 595 badging sees to that.  The interior is a sporty-looking place with bucket seats, a big fat steering wheel, tri-tone upholstery and even more scorpions. 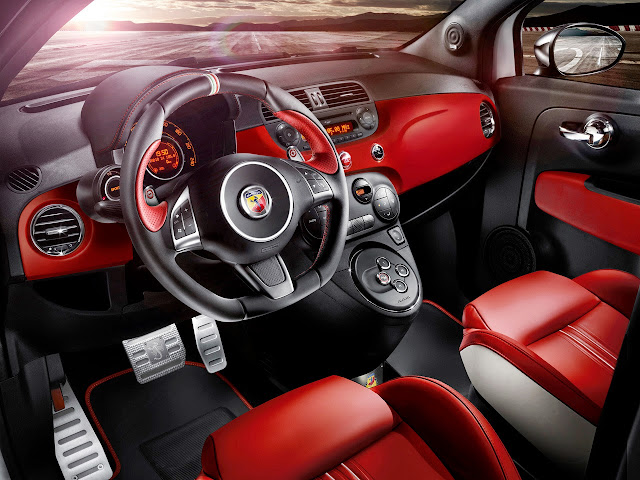 The Fiat Abarth 595 50th Anniversary Edition is available to order starting tomorrow, 50 years to the day after the presentation of the first Abarth 595.  For more info, check out video and press release below.

In the 1960s the 595 proved an immediate success thanks to its extraordinary performance, unusual for such a small car, and became the brand’s ‘icon’. A history of records broken, victories and passionate people who have bolstered the legend of a car that represents the essence of the brand, expressed in four values: ‘size’ (it is the smallest supercar), ‘shape’ (Abarth is the 595 and the 595 is Abarth: all the Abarths in the collective imagination are white with a red band, like the 595), ‘speed’ (it is a racing car boasting record-breaking performance) and ‘spirit’ (it is not vintage, but rather contemporary history).

The presentation of the Special Edition also becomes an opportunity to celebrate the brand. The 595 ’50th Anniversary’ is the car that opens up a new era for the Abarth brand. After 1949, the year it was founded, and 2007, the year it was revived, the two-year period of 2013-2014 presents itself as a decisive step for the Abarth brand that precisely with this car once again demonstrates its outstanding ability to look to the future without betraying its past. So new horizons are opening up for the Abarth brand that from the very beginning showed itself to its public as a brand able to renew itself constantly, accepting and overcoming challenges often considered impossible.

The commemorative car will be produced in only 299 exclusive units. The livery, a modern reinterpretation of the original; the colour; the historical Abarth logos; and the original “Fiat Abarth 595” graphics, all handmade by the best customisation artists at Officine Abarth in Turin, give the car individuality and character to turn it into a “contemporary icon”.

Exclusivity that starts from performance, guaranteed by the experience of the technicians involved. The 180 HP 1.4 T-Jet engine – combined with the “Abarth Competizione” gearbox – make the Abarth 595 ’50th Anniversary’ the most powerful 595 ever produced.

Performance is also guaranteed by performance tyres mounted on 17” alloy wheels with 695 Magnesio Grey design embellished by an aggressive red liner. The setup and braking system have also been further strengthened: Brembo 305 mm floating brake discs that can be dismantled with fixed four-piston caliper and special shock absorbers that guarantee performance in total safety. And of course there is a “Record Monza” variable back-pressure “dual mode” exhaust, designed to improve engine performance and deliver an inspiring sound over 3,000 rpm. Performance is a state of mind.

Specific exteriors: a tribute to the historical 595

The style of the exteriors uses the historical features of the 595 without betraying its original spirit. The historical logos on the car are a tribute to the original and are made with the exclusivity and attention to detail typical of Officine Abarth. The matt three-layer white paintwork, a contemporary reinterpretation of the 1963 model, and the graphics are ensured by the traditional handcrafting machining and finishing processes.

The new Abarth adopts Xenon headlights with dipped and driving light functions for improved light emission and excellent performance in all weather conditions. These devices deliver three times the light intensity and duration of standard halogen lamp headlights. The sun roof completes the tribute to the original car.

Attention to detail and sportiness for its interiors

The interiors are just as personalised and demonstrate the attention to detail and the sporting style of the exclusive 595 50th Anniversary. The red leather sports seats with white inserts and red stitching, combined with the dashboard, are a modern re-interpretation of those of the original car.

The historical logo adorns both the black leather steering wheel with red inserts and finder and the kick plate, giving the car a timeless modernity.

Celebration of the 595’s anniversary is supported by a series of commercial activities across the Abarth range and by an extremely digital communication plan which revolves around the new commercial: the essence of the Abarth brand concentrated in 5.95 seconds through an evocative and epic slow motion.

As usual, in the centre of everything is the car – the absolute star of the video – and its performance. That is because according to Abarth, “Performance is a state of mind”. The communication also goes through the channels more customary for the brand with the organisation of the first digital “rally” (where at least virtual 595 Abarth cars will be involved) and the most numerous anniversary ever, also celebrated with a fun App for iPhone, iPad, Android and Facebook through which Abarth fans can “play” their favourite tunes substituting the musical notes with the powerful sounds of the engines of the Abarth cars. True fans will be unable to say no to playing “Happy Birthday” to celebrate the 50th anniversary of the 595. There will also be events celebrating the important anniversary.

In accordance with the tradition of Abarth Special Editions, the already extensive equipment of the Abarth 595 ’50th Anniversary’ is enlarged with an extension merchandising and accessories line designed to enhance the experience of the brand both on board and outside the car, as dictated by the DNA of the Abarth brand. It is not just about cars, but is a real philosophy of life. Together with other important partners in their reference sectors, Abarth has developed specific products, presently in the manufacturing stage, such as the watch with the exclusive BRM brand, sunglasses made in collaboration with Italian Independent, a symbol of Italian style and cutting-edge technology, leather briefcases that are the result of the craftsmanship of the Tramontano workshop of Naples, the BBR models and a bicycle that will be made with a partner of excellence.

All products are manufactured in limited editions to reinforce the concept of exclusivity and craftsmanship at the core of this project.

Jaguar C-X17 Concept: An SUV for the Leaping
prev next