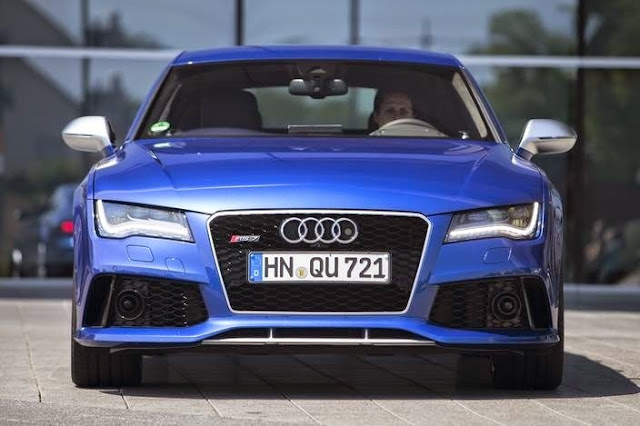 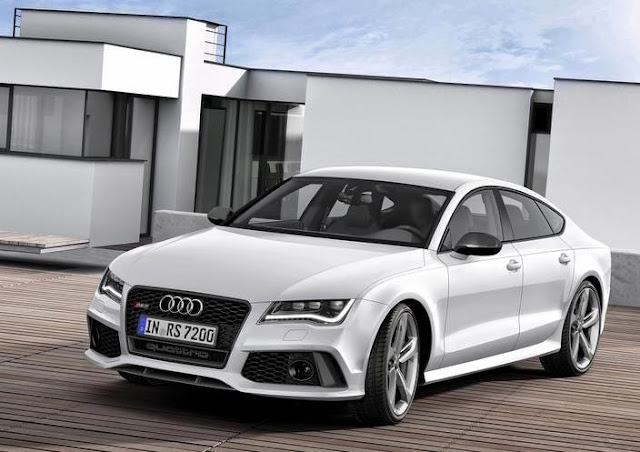 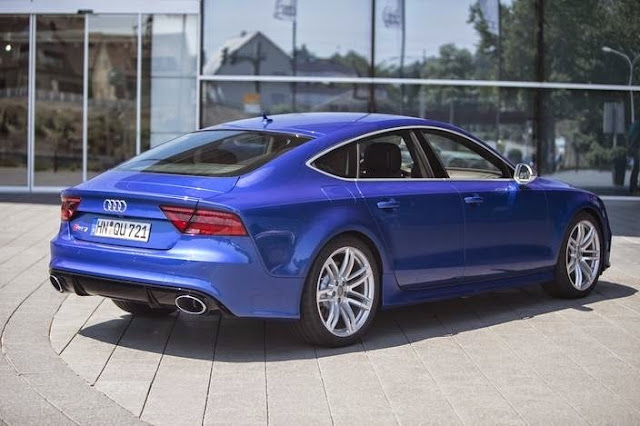 Like most big engines these days, the Audi RS7 makes use of cylinder deactivation, shutting down cylinders 2, 3, 5 and 8 to achieve up to 15 percent better fuel economy.  With loads of other technological goodies like Audi Connect and Audi Side Assist and a gorgeous interior full of carbon fiber, leather and sport seats, the Audi RS7 is an powerful beast in a fine suit. 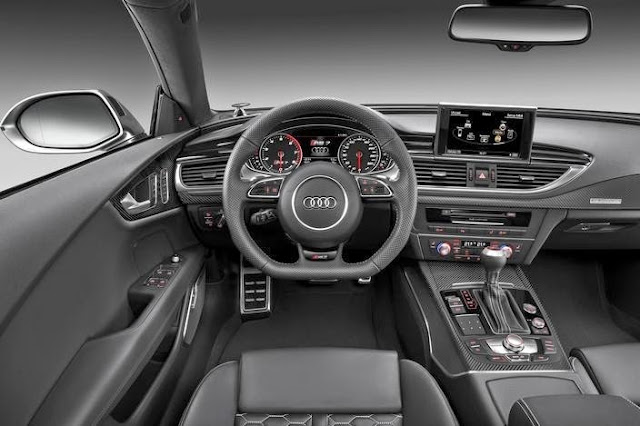 For more info on this kick-ass car, check out the press release below, the gallery of glorious photos and a video of the 2014 Audi S7 in action.

Pricing for the all-new high-performance 2014 Audi RS 7 – the most powerful RS model ever offered in the U.S. – will begin at $104,900. The RS 7, the epitome of aesthetic design, innovative technology and track-tested performance, debuted at the 2013 North American International Auto Show in Detroit and is expected to arrive in U.S. showrooms this fall.

The high-power Audi RS 7 adds to the expanding A7 model line, which is enhanced for the 2014 model year with the addition of the all-new fuel-efficient A7 TDI® clean diesel model, in addition to the A7 3.0T and S7 4.0T variants.

At low to medium loads and engine speeds – with its innovative cylinder on demand technology – the RS 7 deactivates cylinders 2, 3, 5 and 8 by closing their valves via electromechanical actuators. The 4.0 TFSI runs in four-cylinder mode, providing up to 15% better fuel efficiency, while the active engine mounts remove any changes in vibration between eight and four-cylinder modes. The active noise cancellation system is not needed on the RS 7 because of the low exhaust frequencies of the exhaust that are befitting of an RS model. For those that enjoy an even more performance-oriented exhaust tone, a sport exhaust is available with black finishers.

The RS 7 is fitted with a robust brake system employing internally ventilated and perforated discs in a weight-saving wave design; the front discs are 15.4 inches in diameter and the rear discs are 14 inches in diameter. The wave-shaped outer contour of the friction rings reduces unsprung mass by a total of about 6.61 lbs. The brake calipers are painted black and are also available in red.

Exterior
A series of design details give the RS 7 a dynamic edge to its flowing coupe design. Available in standard, matte aluminum or carbon styling, the RS 7 features distinctive bumpers, Audi Singleframe® grille in aluminum matte or high-gloss black, honeycomb grille inserts and heated, auto-dimming and power-folding exterior mirrors. The adaptive rear spoiler, lower rear diffuser and two large elliptical tailpipes of the exhaust system signify the performance that the RS 7 has to offer.

Technology and driver assistance
The Audi RS 7 starts with the Prestige equipment level, which offers a multitude of technologies including the groundbreaking Audi MMI® touch with handwriting recognition. With hard and soft keys, dedicated buttons for commonly-used controls and a revolutionary touchpad that interprets hand-written inputs, you can perform a number of functions, like write the digits of telephone number and the letters of the navigation destination with a finger, or scroll over maps, all without taking your eyes off the road.

The RS 7 is equipped standard with Audi side assist, which monitors the blind spot areas, as well as fast-approaching vehicles, at a range of approximately 150 ft. to the rear of the car.

The optional Night Vision Assistant can detect pedestrians approximately 300 ft. ahead of the vehicle; once a pedestrian is registered, the system highlights him/her in yellow. If the pedestrian moves into the anticipated path of the vehicle, he/she is highlighted in red and accompanied by an acoustic warning.

A cornerview camera is part of the Driver Assistance plus package, and the available adaptive cruise control and Audi pre sense plus enhances safety for drivers and their passengers.

Audi connect®
The 2014 Audi RS 7 is equipped standard with the award-winning infotainment system Audi connect®. Audi was the first global auto manufacturer to offer factory-fitted in-vehicle Wi-Fi connectivity for passenger use, enabling the Audi connect system to deliver connectivity to up to eight wireless devices. With Audi connect – offered complimentary for six months and available for as little as $15 per month thereafter – the onboard Audi MMI Navigation system is enhanced with Google Earth™ maps for a true aerial view of the route. Audi connect also features real-time localized weather, news and live fuel prices; Google Voice™ Local Search for detailed information about travel destinations, such as restaurant or hotel hours, pricing and customer reviews; and the myAudi Destination feature, which allows users to log on to Google Earth from virtually any location in the U.S. and download up to 50 destinations to the vehicle. Audi also offers real-time Sirius XM® Traffic information via enhancements to the Audi MMI Navigation plus system (active Sirius XM® Traffic subscription required).