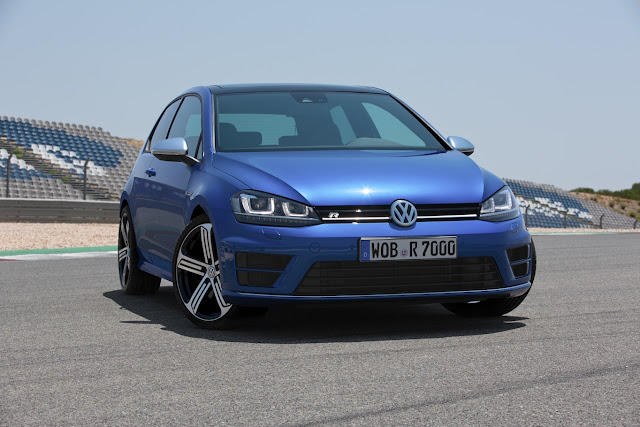 GTI badges!?! We don’t need not stinkin’ GTI badges!  Yeah, I know that’s bad even for me, but its the first thing that popped into my head after reading the latest on Volkswagen’s king of the Golfs, the VW Golf R.

The VW Golf R32s and Golf Rs have always been designed to be the best a Golf can be, kinda like the recent Ferrari 458 Speciale.  Serious performance, power and handling tweaks combined with go-fast styling, exclusive R badging and really, really good racing-like seats to create a pretty good hot hatch. 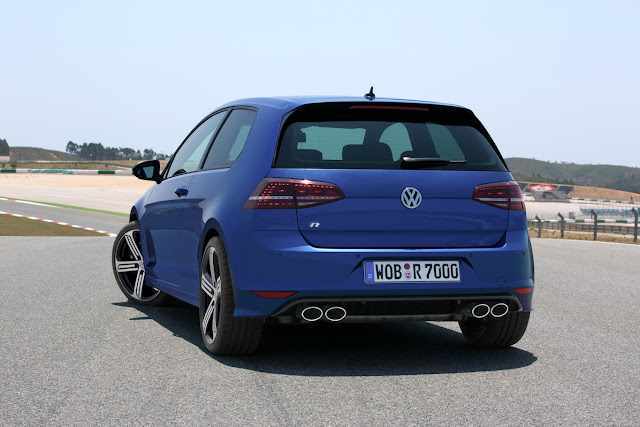 Now, however, VW means business.  Set to shed its cover officially at the Frankfurt Motor Show in a few weeks, the Volkswagen Golf R should be a lot of fun as it gets the biggest power increase so far, up to 296 hp and 280 pound-feet of torque.  That’s a gain of 35 hp.

It’ll trot from 0-62 in 4.9 seconds (0-60 in ~4.7) with the optional dual-clutch trans and happily keep going all the way to 155 mph.  That is some serious oomph.  Routing the Golf R’s power to all four wheels is that optional six-speed DSG transmission I mentioned or a standard six-speed manual.

Although, we’re not exactly sure when the VW Golf R will make it to North American shores or even what a US-spec version will consist of.  But, we do know Europe will get theirs in the fourth quarter of 2013 with a sticker starting at €38,325 ($51,283). A good guess for US pricing would be just a bit north of the current Golf R’s $34,195 starting price.

There’s a fair amount of details on the Volkswagen Golf R in the tech specs and press release below.  So, take a look.
Technical Specifications

Radio and radio-navigation systems. Volkswagen has equipped the Golf R with redesigned radio and radio/navigation systems, all of which have touchscreens as standard. The new generation system is available in three different display sizes: 5 inches, 5.8 inches and 8 inches. For the first time, Volkswagen has fitted proximity sensors on screens that are 5.8 inches and above: as soon as the driver or front passenger moves a finger near to the touchscreen, the system automatically switches from display mode to input mode