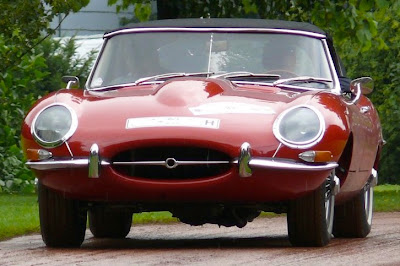 Every once and a while, a model comes along that changes everything we know about cars.  The Ford Model T made the car available to the general public.  The Cadillac Type 53 was the first car to use the modern control layout.  The Chrysler Airflow brought about the use of wind tunnels during design to improve aerodynamics and performance.  The Lamborghini Miura ushered in the age of the supercar.  The McLaren F1 taught us what true speed was.  The Bugatti Veyron has taken technology, craftsmanship and performance to stratospheric heights.  And, the Tesla Roadster has brought together high-performance and electric power, bringing us one step closer to viable electric cars.

However, there is one car that is well and truly on the top of the list of automotive greats, the Malcolm Sayer designed Jaguar XK-E, also know as the E-Type.  The E-Type redefined what beauty is in a car.  Upon seeing it, Enzo Ferrari called it “The most beautiful car ever made”.  That means a lot coming from the man who made the  274 GTB/4 Berlinetta.

Jaguar created two prototype concepts ahead of the E-Type, the E1A in 1957 and the E2A in 1960.  The E1A featured a monocoque chassis, fully independent rear suspension and the “XK” engine, a dual-overhead cam inline 6 cylinder around since 1949.  The E1A was a factory test mule and was never released to the public.  The E2A was made from an aluminum body on a steel chassis and used a 3 liter version of the “XK” engine.  This car was finished as a race car, as Jaguar thought the racing circuit would provide a better testing ground.  They were right.  The orignal E2A was recently sold through Bonham’s Auction House for $4,957,000.

Series I of the XK-E ran from March 1961 to 1968 and used the 3.8 liter straight-6 with SU carburetors engine from the XK150S until October 1964 when the displacement was increased to 4.2 liters.  Like the prototype racer, the Series I came equipped with disc brakes all around and a fully independent coil rear suspensions with torsion bar front ends.

My favorite feature of the Series I was the glass-covered headlights that were present on most E-Type variations until 1967.  If you want to get detailed, the Series I also featured a smaller opening at the front, signals and taillights located above the bumpers and the exhaust protruding from under the rear license plate.

From 1961 to 1964, the Series Is were equipped with a Moss 4-Speed transmission which was missing the useful syncromeshing for first gear.  In 1965, Jaguar adopted a 4-speed gearbox with syncromeshing in all four gears.  A year later, to add to the roadster and coupe E-Types offered, Jaguar added a 2+2 coupe version with an optional 3-speed automatic transmission.

In 1969, Jaguar released the XK-E Series II, which only lasted three models years until 1971.  Jaguar kept the three model options, the convertible, the coupe and the 2+2.  The Series II lost the gorgeous glass covered headlights in favor of open lights, switched to a wrap-around bumper and addressed cooling issues by adding electric fans and enlarging the car’s “mouth”.  More comfortable (but uglier) seats were fitted to the interior, and air conditioning and power steering were offered as options for the first time.

Due to what I can only define as idiocy on the part of the U.S., Series II E-Types imported to the States were fitted with twin Zenith-Stromberg carbs and detuned.  I’m not sure why, but apparently, the U.S. preferred a slower E-Type.  Like I said, idiocy.  18,809 Series II E-Types were sold.

1971 through the XK-Es end in 1974 saw several major changes in Series III.  To begin with, the 2-seater coupe was eliminated, leaving just the roadster and the 2+2.  Also, Jaguar canned the venerable straight-6 in favor of a new 5.3 liter V-12, which would evolve into the power plant for the XJS.  Better brakes and power steering became standard, and the car was fitted with a new front grill, flared wheel arches and V-12 badging.  15,287 Series IIIs were sold.  While it is still an astonishingly beautiful car, the Series III E-Type wasn’t nearly as good as the Series I and II, with Series I being the all-out favorite.

Today, the E-Type is getting a lot of attention.  Don Draper runs one through its paces on the current season of Mad Men.  Jaguar, themselves, are marketing the C-X16 concept as the E-Type reincarnated.  They have even gone so far as to name the 2014 production model based on the C-X16 the F-Type.  But, no matter how good the F-Type might be, nothing will ever live up to the nearly perfect E-Type.

The E-Type is a very rare thing.  It’s a legend that is as good in myth as it is in reality.  It is still the pinnacle of automotive beauty.  While current cars are faster and have better performance, none give you the thrill of looking down that long hood and hearing the rumble of the “XK” straight-6.  The Jaguar E-Type will never be replicated.  It serves as inspiration for designers whose cars can only hope to capture some of it’s magic.