It’s day two at the 2013 North American International Auto Show in Detroit.  That means more debuts, updates, concepts and all around automotive shenanigans.  With new models from Bentley, Mini, Cadillac, Ford and all the rest, the 2013 Detroit Auto Show is showing us that car makers mean business and are pulling very few punches with their next generations and beyond.  Now, the highlights…

FALCON MOTORSPORTS:
If you’ve never heard of Falcon Motorsports and their F7, you’re definitely not alone.  This Holly, Michigan based supercar maker isn’t exactly on everyone’s radar…yet.  The F7 is certainly happy among the rarefied air of supercars like the Lamborghini Aventador, Ferrari F12 Berlinetta, Gumpert Apollo and McLaren MP4-12C. 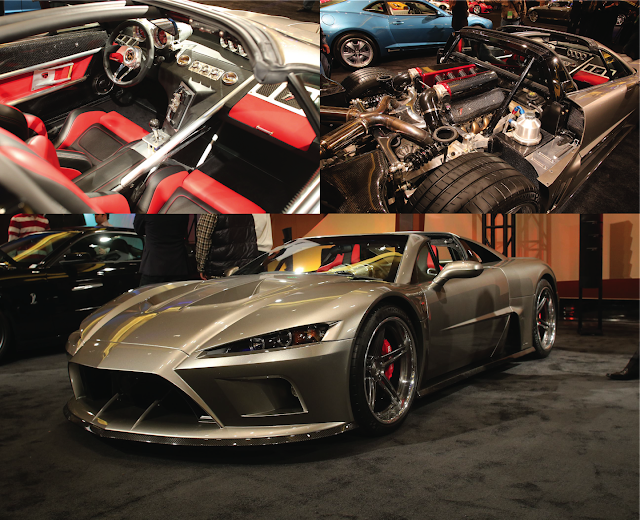 The style of the Falcon F7’s carbon fiber skin over an aluminum and carbon fiber monocoque chassis is striking.  Deep hood scoops between narrow slanted headlights and a gaping maw of a front fascia lead to a low sweeping roof and bulging fenders.  Definitely looks the supercar part.

How about the performance?  In a word…quick.  Very, very quick.  A longitudinally mounted seven-liter V8 puts out 620 horses at 6,600 rpm and a grunty 585 lb-ft torque at 5,400 rpm.  All that oomph is put through a six-speed gearbox.  The result is a 3.3 second zero-to-sixty and a top speed of 200 miles per hour.  The quarter mile passes in only 10.9 seconds.  The Falcon F7 can turn too, to the tune of 1.3g.  Braking is handled by six-pot Bosch calipers with 15 inch vented and slotted rotors up front.  Out back, four-piston calipers squeeze 14 inch vented and slotted rotors.  Sixty-miles-per-hour to zero in under 100 feet.

VOLKSWAGEN:
Yesterday, I focused on Volkswagen’s CrossBlue Concept plug-in diesel hybrid, but, the CrossBlue isn’t the only VW hybrid SUV concept in town.  VW has also brought along the Cross Coupe Concept hybrid, a sleeker, more acute crossover powered by VW’s 2-liter turbo-diesel inline 4-cylinder mated to two electric motors.  One electric motor is attached to the front wheels and its 133 lb-ft serves to either turn the wheels or act as a generator.  The second electric motor, rated at 199 lb-ft, is attached to the rear axle.  The rear motor draws power from either a 9.8 kWh battery or the front generator.  Back up front, the 295 ft-lb turbodiesel drives the front wheels.  With a seven-speed dual clutch and seven different driving modes (City, Sport, Off-Road, E-Mode and Charging) the Volkswagen Cross Coupe can travel about 800 miles on a 14.5 gallon tank (aka 55 mph).  On a fully charged battery you’ll find yourself 28 miles from home after traveling 75 mph.

Every action has an equal and opposite reaction.  So, a pair of turbo-diesel hybrid eco-SUVs means there must be some go-fast juice spent somewhere.  That’s where the Volkswagen Passat High Performance concept comes in.  In addition to a slew of faster looking style add-ons, like 19 inch wheels, carbon-capped mirrors and dual exhaust, and racier seats with better bolstering, VW has put their right foot where the accelerator is.  The VW Passat’s usual 170 hp 2.5-liter five-cylinder is tossed and a 1.8-liter four-cylinder turbo good for 250 hp takes its place.  Power travels to the front wheels through a six-speed automatic transmission.  All that additional power and a sport suspension should make for some driving fun, as much as you can get from a Passat, that is.

HONDA:
What happens when you cross a Honda Fit and a crossover?  You get the Honda Urban SUV Concept.  This little crossover concept made its debut in Detroit, but production will come sometime in 2014.  The concept fits a bit below the Honda CR-V at 169.3 inches long, about nine inches shorter.  Power will be supplied by one of Honda’s Earth Dreams engines.

Take a Ford Focus ST, add bigger cross-drilled brakes, a Ford Racing suspension, a big-ass Borla exhaust system, functional hood vents, wider wheels & tires, a spoiler, a power increase from 252 hp to over 300 hp and a price jump from $23,700 to $38,695 and you get the Shelby Ford Focus ST.  Limited to 500 units and you get a serious hot hatch.

The Ford Atlas Concept is exactly what I imaged a future truck would look like when I was a little kid. First unveiled in Detroit, the Ford Atlas is a strong indicator of what may come with the next generation Ford F-150.  Man, I hope so.  So, yeah, this truck is also a Transformer.  You can actually change the aerodynamics of the Ford Atlas on the fly.  Active wheel shutters (to open and close the space between the spokes) and a “smart” chin spoiler will give the Ford Atlas increased fuel efficiency.  The valley in the roof works as a sort of cargo cradle to strap stuff to the roof.  Cool, huh?  Dynamic Hitch Assist will automatically align the truck’s hit to a trailer.  Come on Ford.  Make this truck!

MASERATI:
Ah, a new Maserati model.  A new Maserati Quattroporte, that is.  As it happens, this new Quattroporte is the vanguard of a Maserati lineup that is soon expanding to five models.  And what a vanguard it is.  The all new design comes with a here-to-fore unheard of 410 horse V6 powerplant and AWD to go with the 530 hp V8.

NISSAN:
The Nissan Resonance Concept debuted in Detroit this week.  The Resonance gives us a good glimpse at the next-gen Murano, which, Nissan has confirmed, will be built in Mississippi.  The Nissan Resonance has an AWD hybrid systems with a CVT sending the power to the wheels.

CADILLAC:
Give the folks over at Cadillac a Chevy Volt and a blank design canvas, they make the best looking plug-in hybrid available, the 2014 Cadillac ELR.  Putting Cadillac’s Art and Science design aesthetic of long angled headlights, origami-like folds and beautiful interior with the eco-efficiency of a 1.4-liter range-extending (read: generator) gas engine, a 15.6 kWh lithium-ion battery, an electric motor turning with 295 lb-ft of torque and total of 207 horses and you get a luxury electric car that will travel 35 miles on battery alone and 300 miles on a nine-gallon tank of gas.

BMW:
The BMW M6 Gran Coupe has been floating around for some time now, but it has just made its official debut in Detroit.  This Bimmer is a serious car, so no goofy write-up this time.  Just the facts…

MINI:
Just as expected, the Mini John Cooper Works Paceman is basically a two-door Mini Countryman JCW.  The JCW Paceman get the same 218 horse four-cylinder with 221 lb-ft put through a six-speed manual to either the front wheels or all four via Mini’s ALL4 AWD system.  Just because it isn’t totally original within the Mini line-up doesn’t mean it won’t be an absolute blast to drive, like all other John Cooper Works Minis.  The JCW Paceman will hit a Mini dealership near you this March.