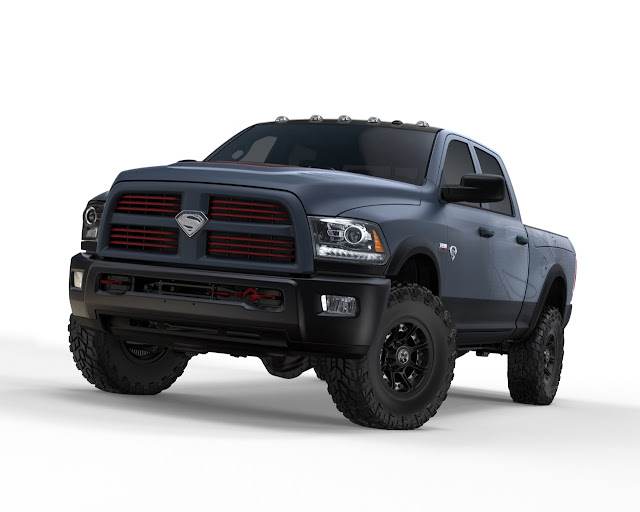 It’s a bird.  It’s a plane.  No, it’s Super-Ram!  Sorry.  Sorry.  I couldn’t resist, but how often can you use a corny Superman reference when writing about a Ram Power Wagon?  Probably just this once since Ram, working with DC Comics, has just lifted the lid on a one-of-a-kind Superman-themed Power Wagon truck for the new Man of Steel movie hitting theaters on Friday. 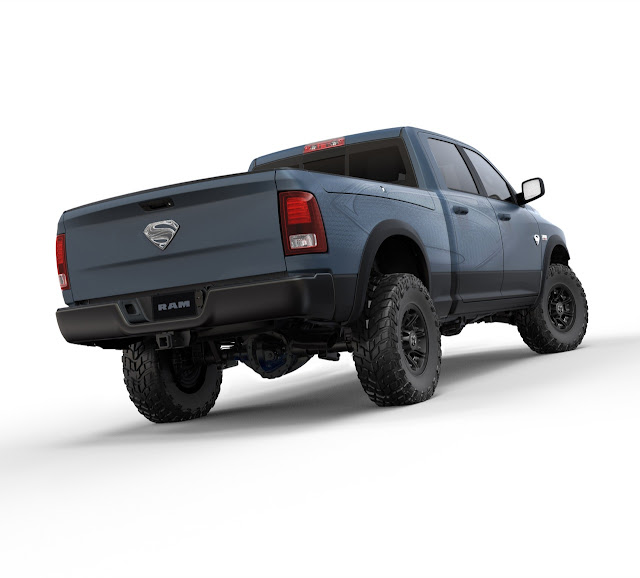 The Super-Ram (my word, not theirs) will be used for marketing and special events and auctioned off once Ram and DC Comics are done with it.  It’s the end result of Chrysler’s partnership with DC Comics and Warner Bros. to provide the vehicles for Man of Steel. 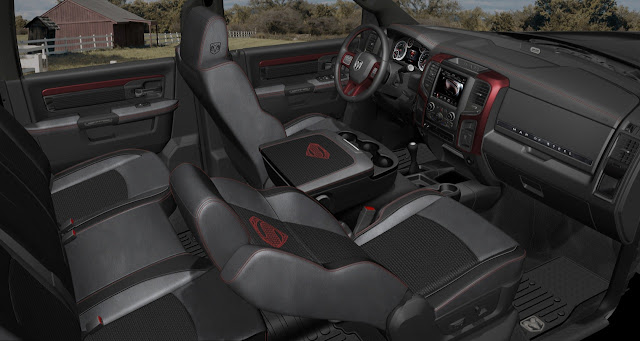 Both the truck and the movie will have their world premieres in New York on June 10th.  I’m more of a Batman fan, but I have to admit, this Superman Ram is pretty cool.  It’s waaaaaaaaay cooler than the Batman Nismo Nissan Juke from a few months ago.  But then again, Superman needs all the help he can muster to not be such a dork. 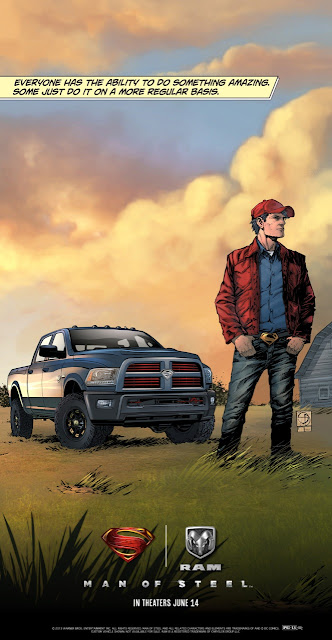 The Chrysler Group provided vintage trucks and other vehicles to Warner Bros. for integration into key scenes in the movie.

“We are excited to partner with Warner Bros. on ‘Man of Steel,'” said Olivier Francois, Chief Marketing Officer, Chrysler Group LLC. “With film alignment we have a fresh consumer engagement opportunity, connecting the heroic character traits of Superman with Ram’s DNA. Our custom creative and marketing program is squarely aimed at building advocacy among passionate fans outside traditional marketing channels.”

The 30-second “Action” spot intersperses scenes from the movie and footage of the Ram truck as the voiceover says, “Everyone has the ability to do something amazing … Some just do it on a more regular basis.” It closes with the Ram logo and the words “In dealerships everywhere” followed by the “Man of Steel” logo and “in theaters everywhere June 14.” The spot can be viewed on the Ram Truck brand YouTube channel.

The key message of the television ad – how the work that Ram owners do make them superheroes in their own right – also is reinforced in print ads that will promote Ram trucks and the “Man of Steel” movie through the July 4 weekend. The Ram brand teamed up with DC Entertainment comic artist Shane Davis to create a custom illustration for the ad, which will run June 7 in the weekend edition of USA Today.

“Ram celebrates those who dare to be great and never back down from a challenge,” said Reid Bigland, President and CEO – Ram Truck Brand. “This is the essence of Superman and also embodies our Ram truck buyers, who believe in hard work, integrity and standing up for what is right.”

The Ram interior and exterior design team created a special edition, one-of-a-kind “Man of Steel” Power Wagon truck with special “Man of Steel”-inspired design cues, colors and branding. The truck will make its debut June 10 in New York City at the world premiere of the movie. It will then be on display at special events throughout the summer and fall, including the National Finals Rodeo and State Fair of Texas, before being auctioned off for charity at a later date.

The Dark Ceramic Gray truck features a high-gloss black roof with Anodized Red grille accents, created from a durable 14-coat paint process. It has forged-aluminum, satin black 17-inch off-road wheels, Superman logos on the front grille and rear tailgate and a custom, one-off vehicle wrap inspired by the crest and texture of Superman’s suit. The wrap highlights a tone-on-tone interpretation of the iconic Superman S-shield, and helps unify themes found on the interior and exterior of the truck.

Interior features include custom mesh seat inserts reminiscent of Superman’s own suit with integrated Superman logos on the seats and console; Pewter leather seats; and Anodized Red paint trim accents on the doors, steering column, radio cluster and seats. There also is “Man of Steel” logo badging on the glove box and a “Man of Steel” screen backdrop and start-up screen on the radio cluster.

The television ad will run in network and cable entertainment, news and sports programing beginning June 4. The spot and print ads were created by the Dallas-based The Richards Group agency.

About ‘Man of Steel’
From Warner Bros. Pictures and Legendary Pictures comes “Man of Steel,” starring Henry Cavill in the role of Clark Kent/Superman, under the direction of Zack Snyder. A young boy learns that he has extraordinary powers and is not of this Earth. As a young man, he journeys to discover where he came from and what he was sent here to do. But the hero in him must emerge if he is to save the world from annihilation and become the symbol of hope for all mankind.

“Man of Steel” also stars Amy Adams, Michael Shannon, Kevin Costner, Diane Lane, Laurence Fishburne, Antje Traue, Ayelet Zurer, Christopher Meloni and Russell Crowe. The film is produced by Charles Roven, Christopher Nolan, Emma Thomas and Deborah Snyder. The screenplay was written by David S. Goyer from a story by Goyer & Nolan, based upon Superman characters created by Jerry Siegel & Joe Shuster and published by DC Entertainment. Thomas Tull, Lloyd Phillips and Jon Peters serve as executive producers. Warner Bros. Pictures presents, in association with Legendary Pictures, a Syncopy Production, a Zack Snyder Film, “Man of Steel.” Opening beginning on June 14, the film will be released in 2D and 3D in select theaters and IMAX®, and will be distributed worldwide by Warner Bros. Pictures, a Warner Bros. Entertainment Company. “Man of Steel” has been rated PG-13 for intense sequences of sci-fi violence, action and destruction, and for some language. www.manofsteel.com

About Ram Truck Brand
The Ram Truck brand continues to establish its own identity and clearly define its customer since its launch as a standalone vehicle brand. Creating a distinct brand for Ram trucks has allowed the brand to concentrate on how core customers use their trucks and what new features they’d like to see. Whether focusing on a family that uses its half-ton truck day in and day out, a hard-working Ram Heavy Duty owner or a business that depends on its commercial vehicles every day, Ram has the truck market covered.

The Ram Truck brand has the most innovative lineup of full-size trucks on the market. Ram Truck has emerged as a full-size truck leader by investing substantially in new products, infusing them with great looks, refined interiors, durable engines and features that further enhance their capabilities. Truck customers, from half-ton to commercial, have a demanding range of needs and require their vehicles to provide high levels of capability. Ram trucks are designed to deliver a total package.