Among all of the milestone anniversaries this year, Lamborghini, McLaren, Aston Martin, Caterham and their respective anniversary editions, the 50th Anniversary Edition of the Porsche 911 is perhaps the eagerly most anticipated.  Maybe that’s because a Porsche 911 is the most attainable in the stable of birthday cars.  Or, maybe that’s because fans of the Porsche 911 are almost rabid in their obsession and devotion to that wacky German car with the engine in the wrong place.  No matter what the reason, the wait is over.  The Porsche 911 50th Anniversary Edition is here, at least in spec and photo form.  And, production is limited to 1963 cars.  Fitting, no? 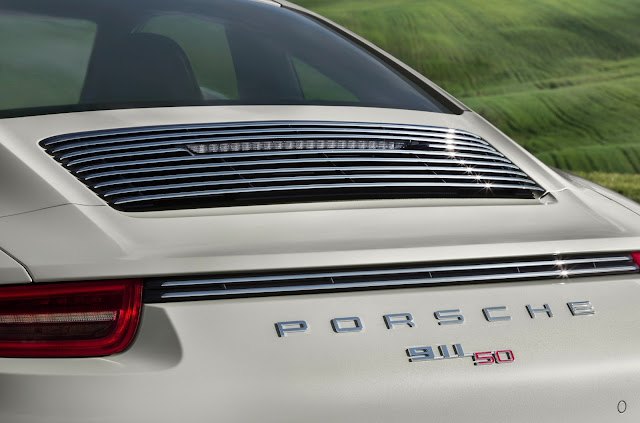 The actual unveiling of the 911 50th Anniversary Edition will take place on September 12, 2013 at the International Motor Show in Frankfurt.  But, no worries, Porsche has given us plenty of info about their birthday car to hold us over.  First off, the 50th Anniversary Edition is based on on the 991 911 Carrera S in all of the flat-six, rear drive glory that made the 911 the icon it is today. 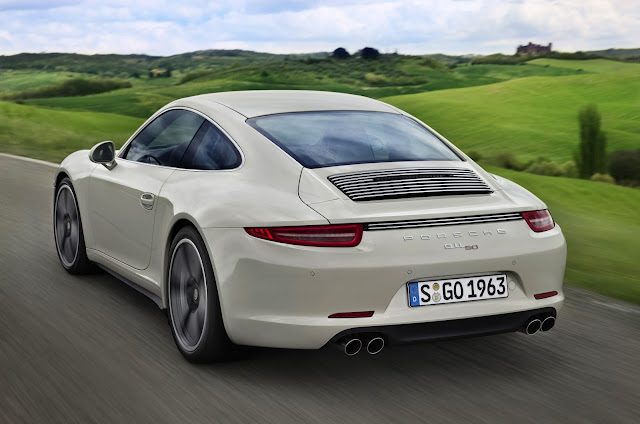 To make it more celebration-y, Porsche has loaded the 911 50th Anniversary Edition will all sorts of performance goodies.  While it’s based on the regular Carrera S, the anniversary 911 gets the wide body from the C4S.  That means a beefier rear stance and better corner tracking.  It also gets Porsche Active Suspension Management, sport exhaust, Porsche’s Sport Chrono Package and (best of all) a Powerkit which boost output to a whopping 430 horse.  Weeeee.  The jaunt from 0 to 60 mph passes in a scant 3.8 seconds with the optional PDF transmission (0-60 increases to 4.2 seconds with a manual trans).  Top speed is 185 with PDK and 186 with a stick. 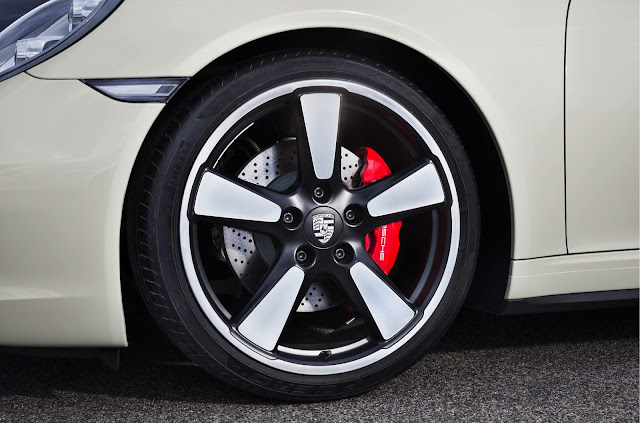 Visually, the Porsche 911 50th Anniversary is striking in graphite grey or geyser grey metallic paint as well as black monochrome.  Special matte black 20 inch “Fuchs” style wheels adorn all four corners.  Around the outside, Porsche fitted chrome trim strips on the front air inlets, the fins of the engine compartment grille and the panel between the rear lights.  To help light the way, the car is also fitted with Porsche Dynamic Light System (PDLS) with bi-xenon headlights and dynamic cornering lights.  On the rear lid, each car has a two-tone 3D-effect “911 50” badge. 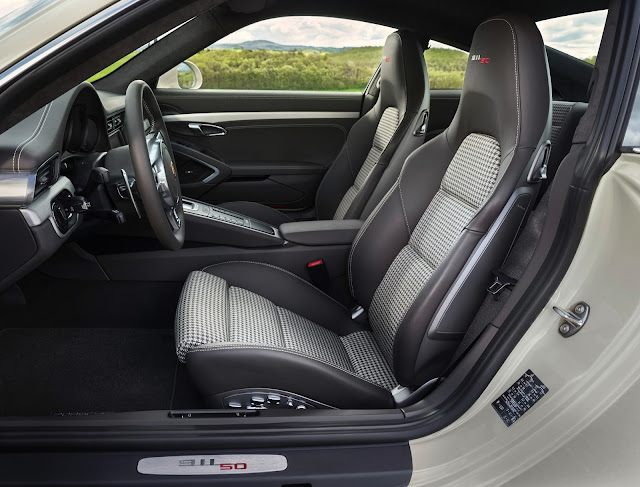 Inside, the finish is all leather with a “Pepita” tartan-like design reminiscent of old school 911s.  The “911 50” logo is embroidered on the headrests and emblazoned on the tach and aluminum door sill plates.  Each of the 1,963 911 50th Anniversary Editions is individually numbered and features a small plaque near the cupholder. 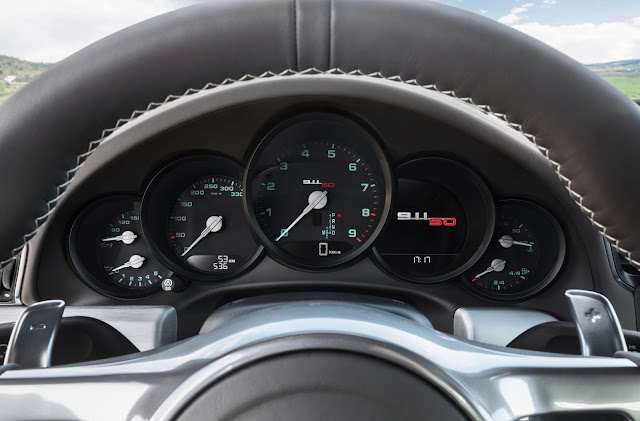 Pricing for the Porsche 911 50th Anniversary Edition is $124,100 plus a $950 destination charge.  Those who want to own a piece of Porsche history will probably snatch up each car no matter what the price.  But, when compared to the 50th anniversary McLaren MP4-12C or Lamborghini Aventador, the 911 50th Anniversary Edition seems to celebrate their birthday with the most pomp and circumstance.  Take a look at the photos and peruse the press release to decide for yourselves. 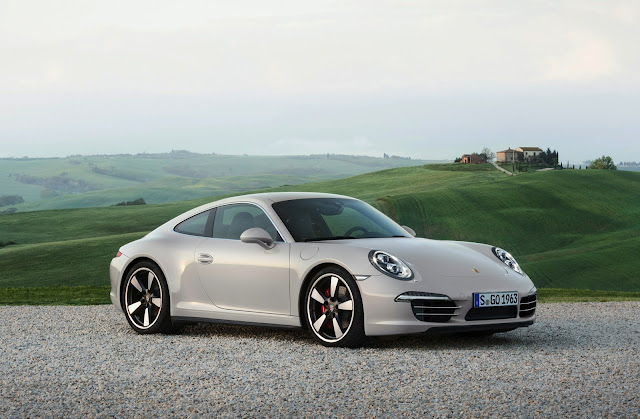 Press Release
911 50th Anniversary Edition
ATLANTA, June 3, 2013 – The Porsche 911 resolves apparent contradictions like no other sports car – such as between tradition and innovation or between exclusivity and high social acceptance, and of course between performance and efficiency. And so, Porsche is celebrating the 50th anniversary of the 911 at the International Motor Show (IAA) in Frankfurt with a special anniversary model based on the 911 Carrera S: like the original 911, the 911 50th Anniversary Edition is a coupe with a flat-six rear engine and rear wheel drive. Its efficient performance, active sport suspension – and special body have current relevancy: the anniversary 911 features the wide body, which is typically reserved for the all-wheel drive Carrera 4 models. This special edition will be limited to 1963 cars, a number that represents the year of the 911 world premiere.

For the US market, the 911 50th Anniversary Edition will be equipped as standard with a Powerkit, which increases engine performance to 430 hp and includes the Sport Chrono Package. The 911 50th Anniversary Edition sprints from zero to 60 mph in 4.2 seconds (3.8 with PDK) and can reach a top speed of 186 mph (185 with PDK). The limited edition models will be available at Porsche dealers this fall and will be priced from $124,100, not including a $950 destination charge.

Porsche will present the limited edition model in time for the 50th anniversary of the 911 at the IAA motor show in Frankfurt, which opens its gates to the public on September 12, 2013. In 1963, Porsche presented the original model to the public at this leading international show for the automotive industry. Since its first presentation – initially as the type 901 – the sports car icon has excited automotive fans across the globe, and today it is considered the reference for all other sports cars. Since making its debut in 1963, the model series has progressively developed without interruption. In the process, the unique character of the 911 was always preserved. The result of this evolution over a 50-year period – which included countless race victories as well – is a sports car that fully embodies the authenticity of the Porsche brand. Its DNA is reflected in all Porsche models.

This limited edition of the 911 Carrera S includes features that have contributed to the 50-year success story of the 911. For example, the limited edition includes Porsche Active Suspension Management (PASM) with special tuning to complement its increased track width and to add support to the exceptional cornering dynamics of the 911. The sport exhaust system outputs a fitting emotional sound. Special 20-inch wheels are a visual tribute to the legendary “Fuchs” wheels and are finished in matte black paint with machine-polished centers. Chrome trim strips on the front air inlets, the fins of the engine compartment grille and the panel between the rear lights emphasize the distinctive appearance of this limited edition model. Another technical highlight of the car’s equipment is the Porsche Dynamic Light System (PDLS) with bi-xenon headlights and dynamic cornering lights.

Two unique colors are available for the anniversary 911, a darker graphite grey and a lighter geyser grey metallic. In addition black monochrome is also available. Each of the cars has a two-tone 3D-effect badge on the rear lid with the numbers “911 50”. This is repeated in three color embroidery on the headrest and in two colors as a logo on the tachometer and the aluminum door sill plates. It can also be found on the cup holder panel together with the limited edition number of the individual vehicle. Other exterior characteristics of the special model are high-gloss window frames and sport design exterior mirrors on the doors panels.

There are tributes to the original 911 in the interior as well: green labeling on the instruments with white pointer needles and silver caps on the instrument pivot pins, just like 50 years ago. Another special feature is the center panels of the leather seats, which are designed with a fabric pattern reminiscent of the “Pepita” tartan design from the 1960s. The full-leather interior is designed in agate grey or black with decorative stitching, some in contrasting color. The driver and front passenger experience typical 911 driving fun in 14-way sport seats or optional 18-way sport seats plus. The gear shift or selector lever – which matches the decorative panels on the dashboard, doors and center console in brushed aluminum – comes from the Porsche Exclusive program.

About Porsche Cars North America
Porsche Cars North America, Inc. (PCNA), based in Atlanta, Ga. is the exclusive U.S. importer of Porsche sports cars, the Cayenne SUV and Panamera sports sedan. Established in 1984, it is a wholly-owned subsidiary of Porsche AG, which is headquartered in Stuttgart, Germany, and employs approximately 220 people who provide parts, service, marketing and training for 190 dealers. They, in turn, work to provide Porsche customers with a best-in-class experience that is in keeping with the brand’s 63-year history and leadership in the advancement of vehicle performance, safety and efficiency.

At the core of this success is Porsche’s proud racing heritage that boasts some 30,000 motorsport wins to date.

[Video] FIAT Abarth 595 50th Anniversary Edition: Most
Why All the Hyper-SUVs?
prev next