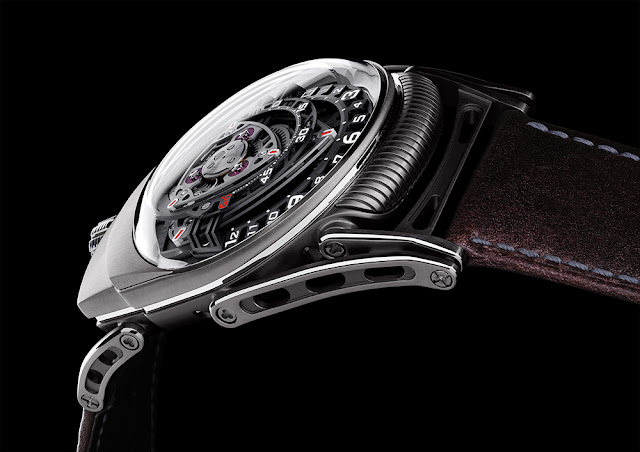 C3H5N3O9 Nitroglycerine Watch is the chemical formula for nitroglycerine, by the way.  And, it’s also a watch company, sort of.  An “horological experiment” according the the madmen behind the C3H5N3O9 Experiment ZR012 watch.  I know.  That’s not the most inviting of names.  Almost as bad as McLaren’s MP4-12C GT3.

Every chemistry student understands that when certain exotic components are mixed, a volatile and explosive reaction can occur.  And, in the summer of 2008, that’s exactly what happened.  As far as the watch world is concerned, you don’t get much more exotic than MB&F and URWERK.  So, when Maximilian Büsser of MB&F and Felix Baumgartner of URWERK got together, they set off an explosive chain reaction culminating, four years later, in the C3H5N3O9 ZR012. 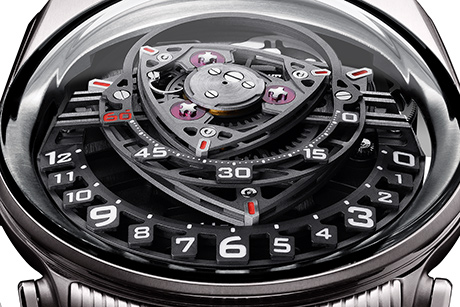 To fit the notion of an “horological experiement,” the ZR012 required the combination of some of the watch industry’s most creative minds.  Felix Baumgartner and Martin Frei, founders of URWERK, had posited that a watch movement based on a Wankel engine concept might be just the idea they were looking for.  They tasked URWERK watchmaker Cyrano Devanthey to design and produce their Wankel-based movement for the ZR012.  At the same time the partners MB&F, Maximilian Büsser and Serge Krinkoff, joined forces with independent watch designer Eric Giroud to design and create the case to house the Wankel movement. 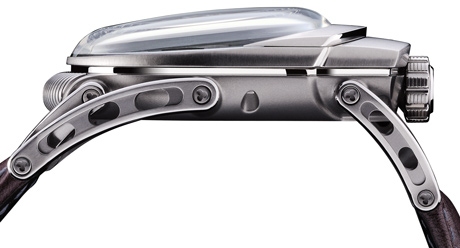 The resulting C3H5N3O9 ZR012 watch is definitely a unique watch by any definition.  The case, which features a crown mounted at the 12 o’clock and is not dissimilar in design from URWERK’s own cases, is zirconium and his highly resistant to corrosion.  The lugs, which are hinged to the case through a compound set-up of arms and screws, are titanium.  Ideally, the articulated lugs are meant to provide the wearer a more comfortable watch.  This is no small watch.  Excluding the lugs, the ZR012 is 55 mm by 44 mm.

To those familiar with Wankel car engines, especially those made popular by Mazda, the movement of the ZR012 should look pretty familiar.  The manual wind watch has a 39 hour power reserve (with power reserve indicator) and indicates the hours and minutes through two eccentric rotating Reuleaux polygons: hours on the lower and minutes on the upper.  It’s a very cool homage to the Reuleaux Polygon internal combustion chamber on Wankel engines.  Wankel, by the way, came up with his idea for a single-chamber, four-stage internal combustion engine in 1951.  His engine uses orbiting Reuleaux polygons within a epitrochroid chamber which houses the intake, compression, ignision and exhaust phases of engine combustion.

That the creative mad men behind MB&F and URWERK came up with such a spectacular and original watch is not surprising.  Neither, unfortunately, is the fact that the C3H5N3O9 Experiment ZR012 is being produced in extremely limited numbers.  There will only be 12 ZR012s made available, priced at 110,000 CHF.  I guess that why they’re calling is an experiment.  Somehow, I doubt this nitroglycerin will blow up in their faces.  Visit C3H5N3O9.com for more info.

The Zenith El Primero 410: A Triple-Date Chronograph
prev next