In 1957 the Hamilton Watch Co. debuted the Hamilton Electric Ventura and the Van Horn as the first two electric watches.  Both watches utilized the new caliber 500 electric movement, powered by the recently developed Button Battery, the same battery that now powers nearly every battery-powered watch in use today. 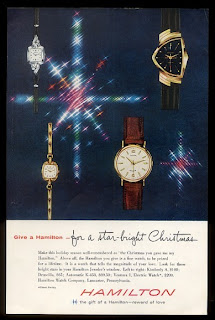 The Hamilton Electric Van Horn was a conservatively designed round watch with little exterior flair.  Conversely, the Venturacame into the world as a spectacular asymmetrical boomerang-style watch. The design was consistent with the most modern styling cues of the time.

The Hamilton Ventura was first cased in 14K yellow gold with a black or silver dial.  Only for the first few months of production, it sported a black leather band with a 24K gold appliqué stripe along the length. Unfortunately, that band was soon replaced by a traditional leather band. 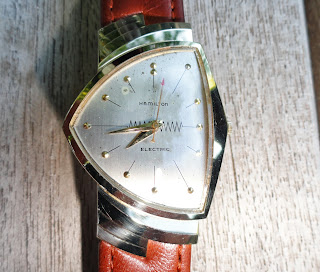 The Electric Ventura was later offered in 14K white gold, and, to different markets, in 18K yellow or rose gold.  It was even offered with a diamond dial.  The Hamilton Electric Venturawould ultimately be fitted with three different movements, the 500, 500A and 505, before production finally ended in 1963.

Hamilton’s Electric Ventura was even highlighted in movies and television shows.  The watch had cameo appearances in Blue Hawaii, The Twilight Zone and Men in Black.  During Blue Hawaii, Elvis Presley wore the watch, and he became so linked personally and professionally to the iconic timepiece that the Ventura is often referred to as the Elvis Watch. 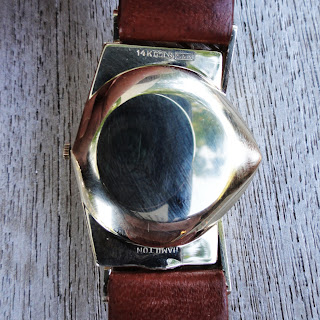 Given the Hamilton Electric Ventura’s spectacular design, iconic history and groundbreaking movements, I, as a lifelong watch collector, have always wanted one in my collection.  However, the problem with any collecting is you don’t always know when that perfect piece is going to make itself available.  And, when it does are you going to want to pay the price?  The Hamilton Ventura has never been a cheap date.  It has always been popular.  It has always been made out of precious metals.  And, it has a movement that can be very expensive to maintain.

Over the years I have seen many Venturas for sale, but with more excuses than I can remember, I have never bought one.  Then, one day last week, all the stars aligned, and just like that, I owned one.  A friend ended up with a very nice Ventura he wanted to sell, and he offered it to me for a reasonable price.  The deal was made, and here it is. 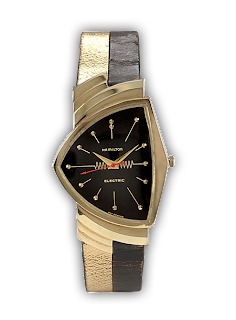 Now that I have this iconic watch, I cannot believe that I have waited so so long to get one.  As I look at it on my wrist, I can only say: “This watch is too cool for words.”

SDW Hyperbar: Water Resistant to a Depth of