Who would have thought that when the “new” Mini came around in 2001 that a decade and some change later we would have twenty or so models with three more on the way?  Taking a look back, it kind of makes sense.  The original incarnation of the Mini brand saw many variations of the iconic hatchback, some good, like the 1963 Austin Mini Cooper S; some bad, like the Mini Pick-Up; and some just plain odd, like the 1967 Austin Mini Moke.

Remembering the 1967 Moke, I kept an open mind when rumors and concepts began emerging for a two-door Mini Countryman-type-SUV.  So, now that the Mini Paceman is here, is it good, bad or just plain odd?

All Minis start at a relatively low price point and come with a strong array of standard features.  The Mini Paceman is no different.  When it goes on sale on March 16, 2013, it will start at $23,900 for a base model, $27,500 for the turbocharged Cooper S Paceman and $29,200 for the Cooper S Paceman with ALL4 all-wheel drive.  And, like all other Minis, it will have an insanely long list of options and add-ons, such as navigation and iPhone integration. 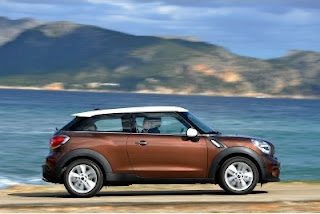 The Paceman slots into the Mini line as essentially a 2-door, 2-plus-2 version of the Countryman, and, as such, has beefier styling and increased ground clearance.  At 162.2 inches long, its not much longer than the Mini Clubman (155.9 inches) while sharing the 102.2 inch wheelbase of the Countryman.  I still think they should have called it the Countryman Coupe. 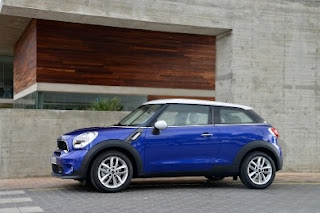 While Mini may have more models than most people have pairs of socks, the Paceman uses the same engine options that are the backbone of the Mini brand.  The base Paceman (aka Mini Cooper Paceman) gets a 121 hp 1.6 liter four-cylinder, and the Paceman S (aka Mini Cooper S Paceman) uses the 181 hp turbochaged version.  If Mini stays true to form (which it probably will), stay tuned for a 208 horse John Cooper Works version (which will, unfortunately, likely be named the Mini John Cooper Works Paceman ALL4).  Seriously, who names these things? 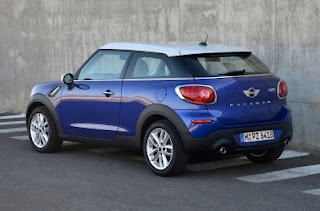 On the road, the Paceman will hit 60 mph in a less-than-scooty 9.7 seconds with the 6-speed stick and 10.8 seconds with the 6-speed automatic gearbox, peaking at 117 mph.  The Paceman S is much better at 6.9 seconds for the manual and 7.3 for the automatic, topping out at 127 mph.  Fit the ALL4 all-wheel drive to the Paceman S and the 0-60 jumps a bit to 7.2 seconds and 7.6 seconds for the manual and auto, respectively.

Each Mini Paceman comes standard with Mini’s Dynamic Stability Control (DSC), ABS brakes, Electronic Brake Force Distribution (EBD), Cornering Brake Control (CBC), Brake Assist and Hill Assist.  Those equipped with ALL4 also get Dynamic Traction Control (DTC).  DTC works to allow a limited degree of slip when moving off of loose or slippery surfaces.  Electronic Differential Lock Control (EDLC) comes on the ALL4 models which will brake a spinning wheel as needed to better handling on the twisties.  DTC and EDLC are available as options on the front-wheel drive Pacemen.

The Mini Paceman gets a choice of eight paint colors including the new Brilliant Copper (see photos), Blazing Red and the Paceman exclusive Starlight Blue (also see photos).  The roof, side mirrors can be painted body color, white or black.

The interior is reminiscent of that of the Countryman but a bit more sporty.  Like the Countryman, the Paceman is a true 4-seater with two full-size rear bucket seats.  Also like the Countryman, a center rail runs the length of the interior and can be festooned with a calvalcade of cup holders, sunglasses cases, phone docks and storage vessels.  Diagonal Track cloth upholstery is the standard with Hot Cross cloth/leather combo, Gravity leather trim and Lounge Leather as options.  For the first time, window controls are integrated into the door arm rests.  Boo.  I liked the toggles.

With a large tailgate, folding rear seats and increased width over the Mini “cars,” the Paceman boasts 38.1 cubic feet of storage.  Capacity shrinks to 11.6 cubic feet with the rear seats up.  That’s a lot of space.  A Chevrolet Tahoe only has 16.9 cubic feet with all seats in place.

The Mini Cooper Paceman is commonly referred to as an answer to a question no one asked.  But, at first blush, it may be the Goldilocks Mini for a good chunk of the market for whom the Countryman is too big, the Mini Cooper is too small.  The Mini Paceman may be just right.

MINI Countryman ALL4 Camp, Clubvan Camper and Cowley
prev next