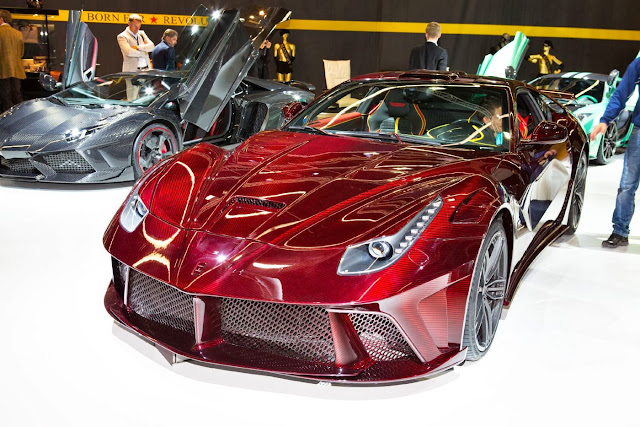 If the forces for good and the forces for evil in this universe set aside their differences to build a car, this would be it… The Mansory La Revoluzione.  The La Revoluzione is Mansory’s take on the Ferrari F12 Berlinetta. (Yes, I know using “the” and “la” together is technically redundant, but whatever.)

Everything about the Mansory La Revoluzione is extreme.  In a deep, almost blood red, carbon fiber, it is certainly extreme looking.  I didn’t know you could get carbon fiber to look this red or this spectacular.  I mean, holy crap, it’s a beautiful and utterly frightening to behold. 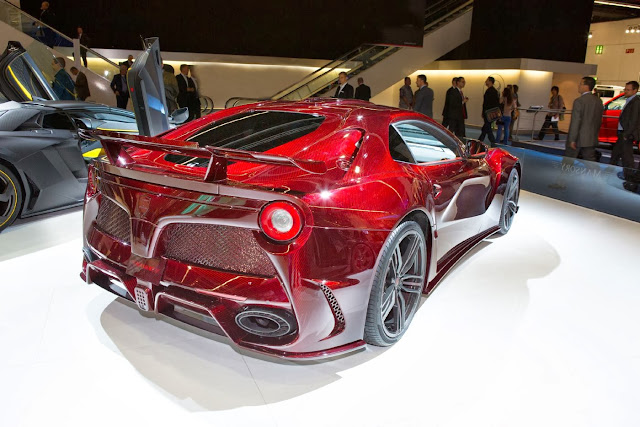 In terms of looks and performance, the Mansory La Revoluzione is nothing short of incredible.  Too bad the interior is absolutely hideous.  I mean, its bright red, black and day-glo yellow.  It doesn’t even match the red carbon fiber exterior.  The huge-weave carbon fiber on the dash and trim is pretty cool though. 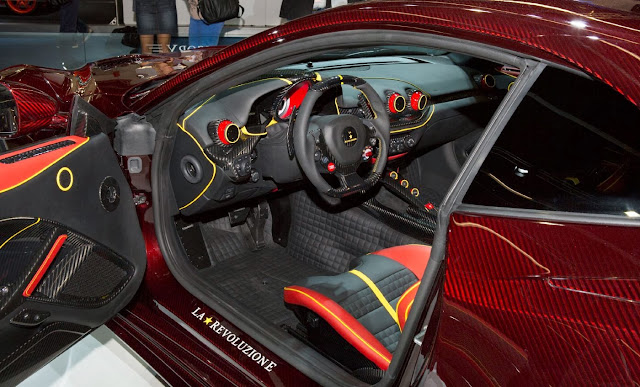 If you have $1,756,040 (€1.3 million) the Mansory La Revoluzione can be yours.  And, if anyone reading this buys one… can I please have a ride?  For more info, check out the press release below.

The epitome of the automotive style is for many the Ferrari F12 Berlinetta. Kourosh Mansory accepts the model as a basis for his work – and nothing more. The head of the exclusive refiners named after him has taken the Gran Turismo as the basis for his completely individually-developed Über-sports car, that can only bear one name: La Revoluzione. There is no doubt about the revolutionary effect of this project; Ferrari is as synonymous with sports cars as no other make, both on and off the track. Now MANSORY has toppled the Italian from its throne and torn up the existing conditions rulebook.

The manufacturer was not content with a patchwork approach, they didn’t even try to optimize the aerodynamics of the F12, but completely stripped down the car and developed a completely new skin.

Only carbon fibre from their own autoclaves met MANSORY’s requirements

The choice of the material should not come as a surprise to anyone: carbon fibre combines strength and lowest mass like no other material. MANSORY recognised this much earlier than many others on the market and over the years has developed an outstanding expertise. In in-house autoclaves MANSORY does not entrust development nor production to a supplier. Only the company’s own engineers have the highest levels of know how that Kourosh Mansory calls for.

So this is how a vehicle shell emerged that is not equalled by any other super sports car. The self-confidently designed front with the inverse formula one nose, the wide variety of inlets and outlets of the air guidance system for engine supply and cooling of the braking system and the striking rear end with the double-walled exhaust tailpipes on both sides are just some aspects of a consistently exciting bodywork design.

MANSORY also developed the wheels specifically for this vehicle. With five triple spokes the rims with its open design grants a view of the perforated brake discs with 398 mm diameter on the front and 360 millimetres on the rear axle. The contact with the road is taken over by Pirelli Ultra High Performance tyres, which on the 9×21 inch front wheels have size 255/30 tyres and on the drive axle reside on 12×22 inches wheels with size 335/25 tyres.

No surprise then that MANSORY also sets new standards with the performance figures of the twelve-cylinder engine. The engineering department has therefore developed new software for the central control unit, installed a new larger turbocharger and designed the whole exhaust system for minimal back pressure. The bi-turbo engine now reaches a peak of an incredible 1200 hp (882 kW) and a maximum torque of 890 newton metres. In the record time of only 2.9 seconds La Revoluzione rockets from a standstill to 100 km/h. Anyone who is brave enough to keep the accelerator pressed down reaches the maximum speed of 370 km/h.

Even the interior has been completely re-developed by MANSORY

The interior is equal in every way to the transformation of the outer skin and the vehicle as a whole. Once again, carbon fibre is the material of choice, but it is precisely designed to transform the interior into reality in accordance with the company boss’s vision. In addition, there is also the extravagant use of finest cowhide leather and Alcantara. Of course the colour scheme exactly matches the vehicle shell and is kept uncompromising in the colour of the revolution: red.

In spite of this complete revamp, the Ferrari can still be glimpsed under the carbon mantle of La Revoluzione. This demonstrates the experience and with what skill MANSORY understands how to take the characteristic lines of the F12 and, at the same time to unveil a completely self-contained form language.

Why is this dream car not a Ferrari, but rather a MANSORY? The answer is clear: this courage is not displayed by a conventional car manufacturer with group affiliation. This requires the boldness and the reputation of someone such as Kourosh Mansory, who has built up a unique reputation through years of dedication and attention to detail – this is his jewel in the crown.

MANSORY – the specialist for high end car-refinements and innovative engineering design offers the La Revolutione for a price of 1.300,000 euros net.