The Goodwood Festival of Speed is going on right now at the Goodwood House in Sussex, England.  Being on their home turf and within spitting distance of their headquarters, Jaguar is bringing their latest leaping cats to the party, the 550 horse breathtaking F-Type-based, D-Type-inspired Project 7 Concept and the 850 horse hybrid technological beast, the C-X75.  There are plenty of specs and pics in the gallery.  Enjoy! 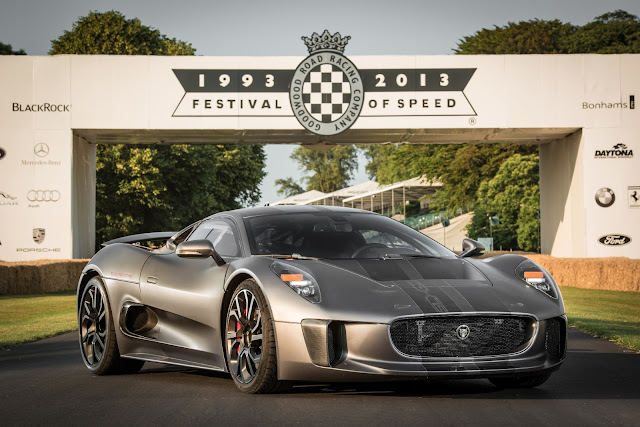 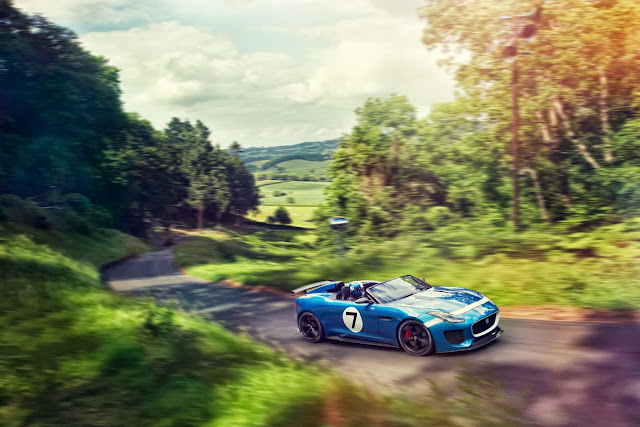 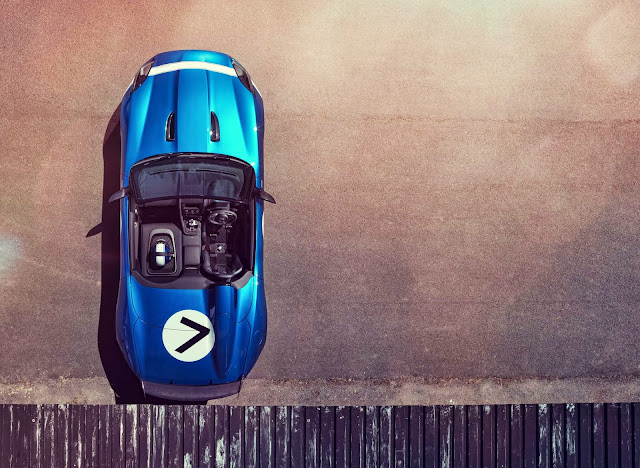 Vehicle Integrity, Jaguar
The Jaguar Project 7 concept will make a dynamic debut at the 2013 Goodwood Festival of Speed on July 12. This concept vehicle is based on the 2014 Jaguar F-TYPE, an all-new, two-seat convertible sports car and winner of the 2013 ‘World Car Design of the Year’ award.

“Project 7 is a single-seat sports car based on the F-TYPE, with the kind of racing-inspired form that designers dream about. It has one purpose: to be driven fast and enjoyed.Jaguar sports cars are known for exceptional performance and clean design. Project 7 captures that spirit in its purest form.”
-Ian Callum, Director of Design, Jaguar 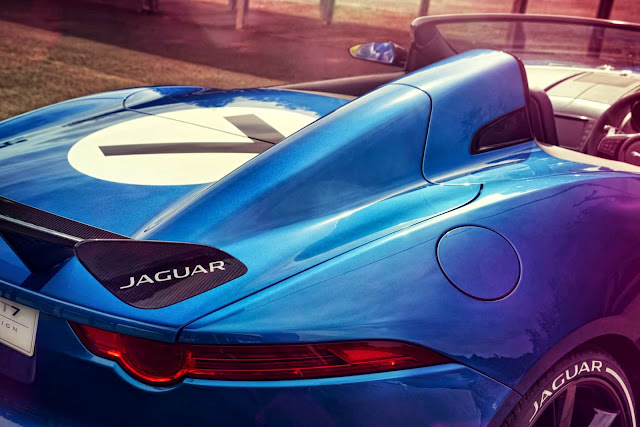 Project 7’s name acknowledges Jaguar’s winning of Le Mans seven times between 1951-1990, and its blue paintwork is reminiscent of the victorious Jaguar D-type cars of 1956/1957.

“The overriding dynamic aim when developing the F-TYPE was ensuring connected feel; it’s a true, driver-focused sports car; agile, immediate, fast and, of course, fun. Having achieved that for the road, Project 7 has given us a unique opportunity to go that little bit further. It’s visceral in every sense – its response, its sound and its sheer performance. I’m very much looking forward to driving it at Goodwood.”
-Mike Cross, Chief Engineer, Vehicle Integrity,Jaguar 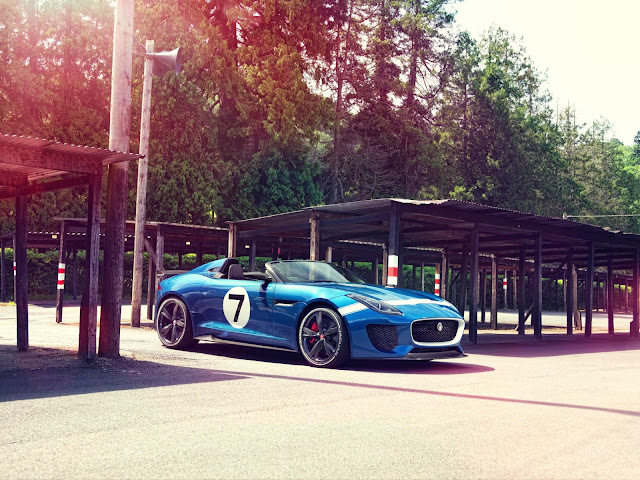 Project 7 is not a static concept, but a fully-functional, high-performance sports car. The F-TYPE’s rigid all-aluminum architecture provides the perfect starting point, with power supplied by a 550hp supercharged 5-liter Jaguar V8 engine. This power is delivered to the rear wheels through an eight-speed ZF transmission with “Quickshift” technology, and an active electronically controlled limited slip differential. Project 7 also features a free-flow exhaust system with a ceramic finish, 10mm lower ride height and a custom-calibrated spring/damper tune.

“Jaguar’s sporting bloodline and innovative ambition are perfectly embodied by Project 7, both through its sensual design, and its shattering performance. Project 7’s Goodwood debut will provide a great stage to showcase the creativity of our design and engineering teams.”
-Adrian Hallmark, Global Brand Director, Jaguar 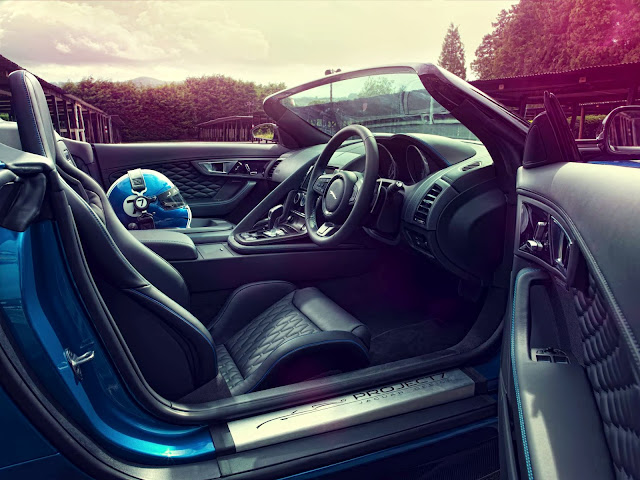 Project 7: A story of passion
Under Director of Design, Ian Callum, who constantly challenges his team to push the boundaries of design, Project 7 went from being an experimental sketch by Jaguar designer Cesar Pieri to the track in just four months.

Bringing to bear his love for cars and motorsport, his passion for Jaguar’s heritage, and his familiarity with the F-TYPE, Pieri drew a single-seat sports car with a swooping profile, cut-down windscreen and race-inspired livery.

“When I saw this sketch of a low-screen, single-seat F-TYPE, I felt enthused by it and wanted to take it further. As designers, our very purpose is to disrupt – to turn the norm on its head and see if it still works – and here at Jaguar, we love to push the boundaries. As a team our challenge was to take this gem of an idea, work within the limitations of production feasibility, and create something worthwhile. So I encouraged Cesar and Alister Whelan, Chief Designer, Jaguar, to take it to the next stage and develop a workable concept, and with the support of key departments across the business, Project 7 was born.”
-Ian Callum, Director of Design, Jaguar 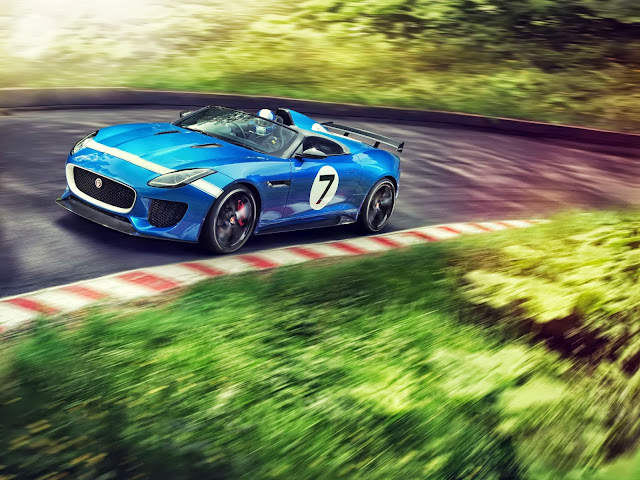 Following digital modeling, a clay model of Project 7 was produced. With that signed off, the Jaguar engineering team worked closely with the design team to ensure that the build stayed true to the concept.

The F-TYPE’s two key design ‘heartlines’ remain. The most prominent change is the new D-T ype-inspired rear fairing section that incorporates a rollover hoop and swoops down from behind the driver. The convertible top system has been deleted.

Aerodynamic modifications include a carbon-fiber front air splitter, side skirts, large rear diffuser and a fixed rear spoiler with a 14-degree angle of attack, giving Project 7 a low muscular stance. The side louvers and bonnet vents are also carbon-fiber, while the carbon-fiber and aluminum mirrors draw inspiration from those on Jaguar’s C-X16 sports car concept, which inspired the F-TYPE.

The windshield has been lowered, while a new front fascia design incorporates revised air intakes and headlights with gloss black surrounds. The car sits on 20-inch forged-alloy wheels with carbon-fiber inserts. 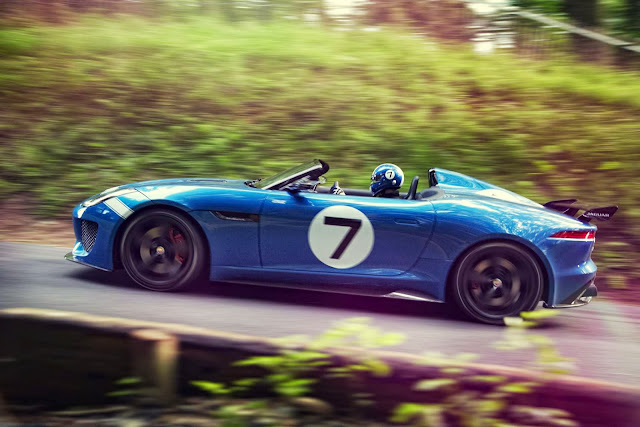 The cockpit of Project 7 is no less impressive than its exterior. The driver sits in a composite bucket seat, which is 1.2 inches lower than the stock seat, and is gripped by a four-point racing harness. The passenger seat is replaced by a custom fabricated helmet holder, which carries a custom-designed Project 7 helmet in matching blue paint and graphics, secured by its own harness.

The seat and the insides of the doors are finished in a quilted racing-style diamond pattern. There are carbon-fiber inserts on the console and shift lever, and the steering wheel is equipped with machined aluminum paddles.

“When you look at this car, it has got an enormous amount of appeal. It’s just full of desire – you can see that its sole purpose is to be enjoyed. Project 7 is a very special car – not just because it’s a one-off, but because of its purity of purpose. It’s pure Jaguar.”
-Ian Callum, Director of Design, Jaguar

IN DETAIL
(Whitley, Coventry, 12 July 2013) The Jaguar C-X75 is set to make a surprise public dynamic debut today at Goodwood Festival of Speed. The prototype hypercar, one of only five development and test cars in existence,  will make its public dynamic debut in the Michelin Supercar Run today along with a number of exciting new sporting cars from Jaguar: XJR, XFR-S, XKR-S GT and Jaguar Project 7; a unique design study based on the F-TYPE.

The Michelin Supercar hill run takes place twice daily throughout the Festival, starting today at approximately 13.00. The Jaguar C-X75 will only be available in front of public eyes at these times, and will not be on static display at any other time throughout the Festival weekend.
The C-X75 will make its way from its hidden enclosure to the hill in silent electric-mode before firing up its innovative 1.6-litre, supercharged and turbocharged four-cylinder engine on the start line.

Generating a combined electric and petrol-powered total in excess of 850hp, the all-wheel drive C-X75 is likely to set a blistering pace and generate a purposeful sound as it scorches up the narrow, winding 1.1 mile run, thereby making an impressive and unforgettable dynamic first impression on the Goodwood crowds.

Although the decision was taken in 2012 that as a result of the global economic climate the C-X75 would not enter full production, it was clear that it was a powerful showcase for Jaguar’s world-leading expertise in lightweight vehicle construction and the ideal test-bed for the company’s innovative research into high-performance, low-emission powertrains.

The great achievements in the development of C-X75 prototypes – including cutting-edge hybrid technologies, carbon composite materials and advanced design solutions pioneered in association with Williams Advanced Engineering – will be utilised in other areas of research and development, innovative future products and next-generation engineering for the Jaguar and Land Rover brands.