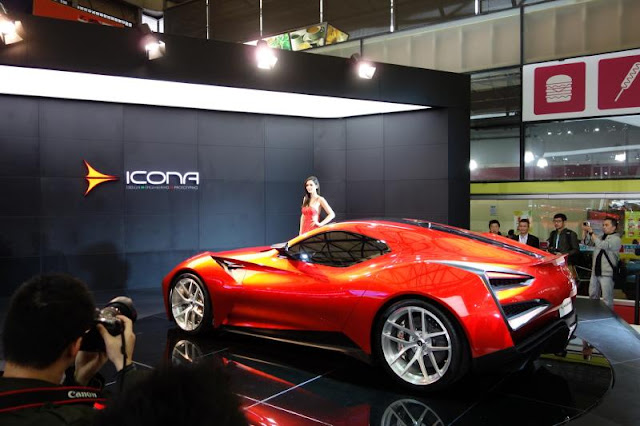 Icona has fully unveiled the Vulcano today at the Shanghai Motor Show.  We now know that it is absolutely gorgeous.  Unfortunately, we don’t know much more.  Icona has been downright mean with the shortage of details on this stunning, stunning supercar. 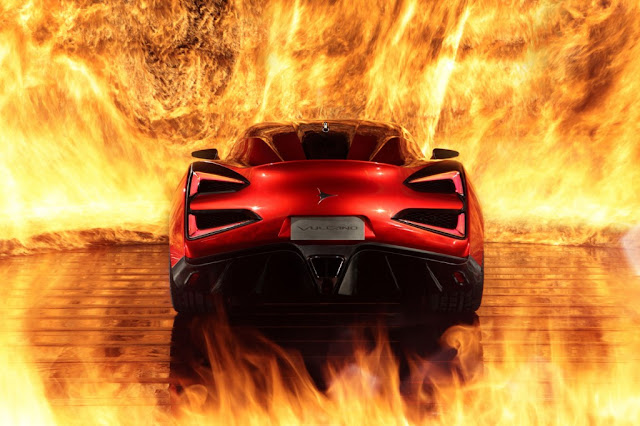 Here’s what we know:  The Icona Vulcano is a supercar created by an Italian design firm located in China through a series of technical and strategic partnerships.  It’s powered by by a choice of powertrains: a gasoline or hybrid putting power to the ground through a choice of rear-wheel-drive or all-wheel-drive.  Power ranges from 870 horse to 950 horse.  Very respectable, indeed. 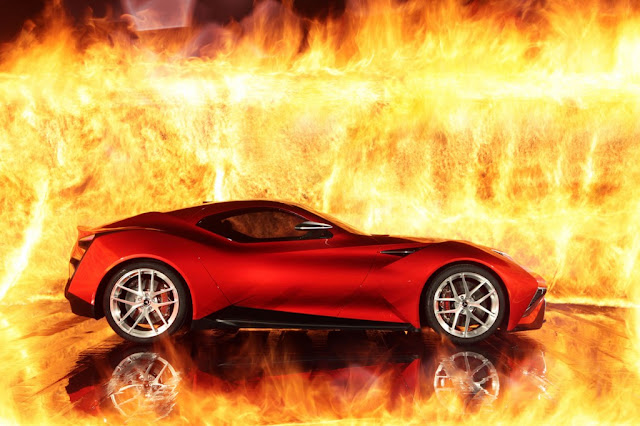 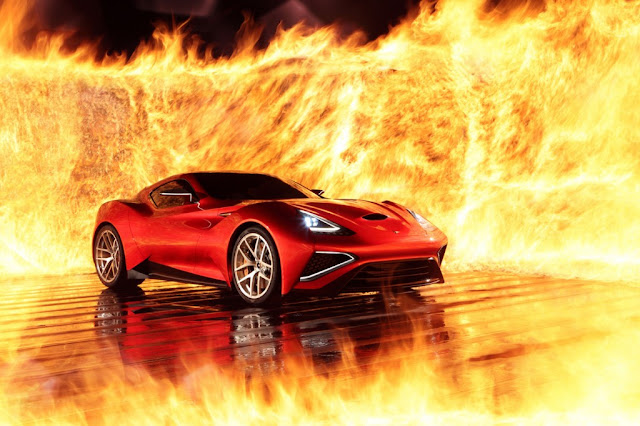 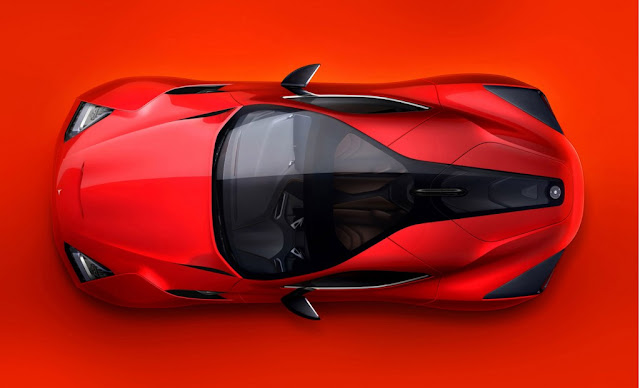 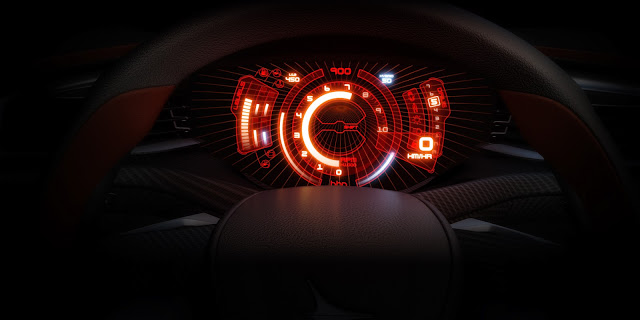 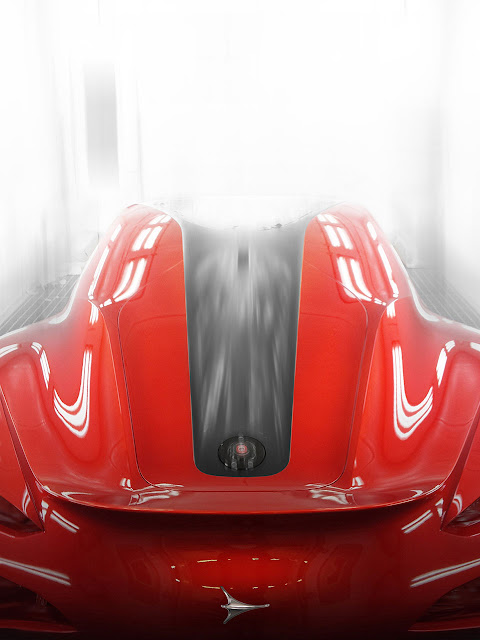 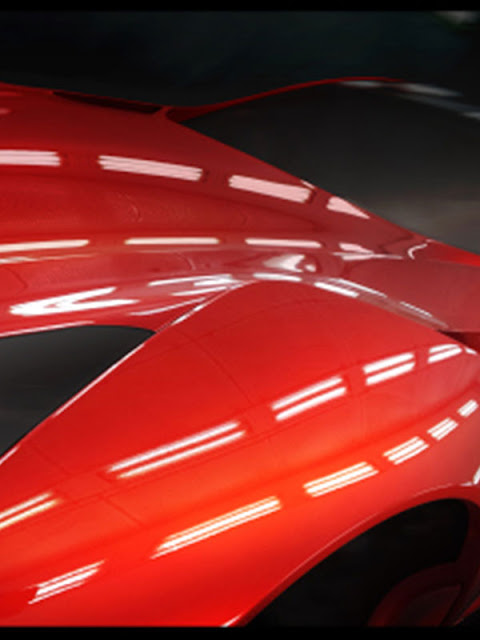 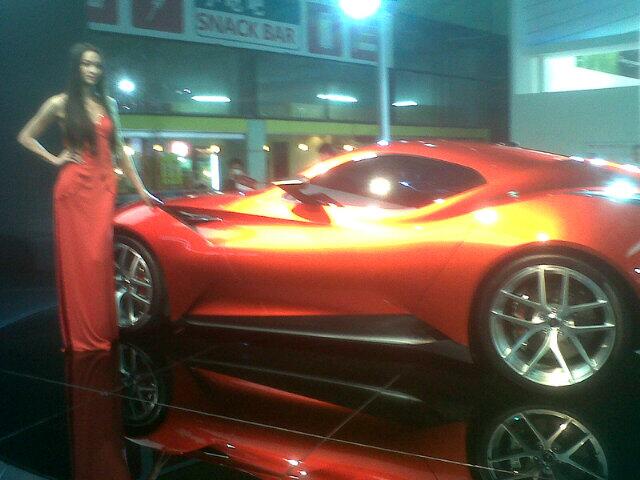 ICONA VULCANO: THE BEAUTY AND THE BEAST COME TOGETHER
A one-off supersports car, coachbuilt in Italy and designed by Icona, the Italian design house based in Shanghai
Italy, 21 March 2013: Icona reveals the first teaser of the Icona Vulcano (iconavulcano.com). This new supercar will be revealed at the Shanghai Auto Show next April.
The Icona Vulcano brings together different skills and expertise of a very Italian tradition. The powertrain is the work of well-known Claudio Lombardi, former powertrain technical director of Ferrari and mastermind of numerous world champion cars: a front engine V12 two-door two-seater car, reaching up to 900 horsepower through a masterful combination of combustion engine and electric motors. The top speed will be around 350 km/h, and 0-200 km/h will be under ten seconds.
Alongside its astonishing performance and pedigree, the design of the Icona Vulcano is an evolution of the very advanced form language which was first introduced on the Icona Fuselage concept in 2011 by Samuel Chuffart, Icona’s design director. The aim of the design approach is to express the amazing capabilities of this extremely powerful car, while maintaining harmonious and generous shapes: bringing together the Beauty and the Beast.
Talented young French designer Samuel Chuffart brings exceptional international experience to his role as design director of Icona. During his eight year tenure at Nissan Design in Europe and the US, Mr. Chuffart played an instrumental role in the creation and realization of the Nissan DNA which is known today. Mr. Chuffart then moved to Jaguar-Land Rover, before being selected for the position of Chief Designer at a leading design house in Italy in 2008, successfully developing numerous production cars soon to be seen on the road.
Claudio Lombardi is one of the most successful Italian motor engineers: racing director of Lancia that won seven World Rally Championships with 037 Rally and Delta S4 from 1982 to 1991, powertrain technical director of Ferrari for Formula One and GT cars from 1991 to 2000, and project leader of Aprilia to win the Superbike World Championship in 2010 with Max Biaggi, using one of the most powerful and light engines ever developed in its category. In the last two years Lombardi founded AIPA to develop different powertrain concepts to make the most of the combination of combustion engines and electric motors for innovative integral powertrain.
ICONA VULCANO: BALANCING BEAUTY AND THE BEAST THROUGH SMART DESIGN
Icona reveals more details about the design process behind the Icona Vulcano, their new supercar which will be unveiled at the Shanghai Auto Show on 20th April.
April 8 2013 — Two years ago at the Shanghai Auto Show 2011, ICONA presented the Fuselage, a new aerodynamic electric concept car that was met with wide acclaim. The idea of creating the Vulcano first came one year later, when Icona was invited to exhibit the Fuselage at the 27th Festival Automobile International in Paris as a finalist in the World’s Most Beautiful Concept Car competition. A new goal was set: if Icona could win hearts with the Fuselage, a four seater sedan, how many more people could they win over with a glamorous 2 seater super sport? The idea for the Icona Vulcano was born.
The very first idea for the Vulcano was to use a front engine layout, and to use a strongly sculpted body side which would evacuate the hot air from the engine and reduce the air turbulence generated by the wheels. “As different ideas came together, the most challenging design issue which we faced was how to create a balance between power and beauty. When you’re trying to create a feeling of aesthetic harmony, you risk creating too many sweet lines, which decreases the feeling of power. On the other hand, if you make too much of the powerful features which are necessary to a super sports car such as its cooling cutouts and blades which manage the air flow, they become graphically too dominant, and this makes the car less beautiful. The way we found the right balance was usually by looking for the greatest simplicity” said Samuel Chuffart, Design Director of Icona.
The Vulcano uses a consistent theme of dynamic triangles set in horizontal symmetry, reminiscent of the ICONA logo, which balance the dynamism of the volume. To connect the features and divide each part, tight lines compliment the voluptuous shape, enhancing the car’s sensual power.
The power train is the work of world-renowned engineer Claudio Lombardi, the former power train technical director of Ferrari. In collaboration with Mr. Lombardi, Icona optimized the design solutions, like the flow of hot air and cold air, as well as the weight distribution and the power handling to maximize the Vulcano’s extreme performance.
Official: www.iconavulcano.com
Founded in early 2010, ICONA Shanghai brings together the best of European design, engineering, modeling and prototyping experience in the automotive sector for the benefit of its customers in China and Asia.
Created in response to growing demand from the Chinese automotive sector for projects to be carried out close to their location, ICONA Shanghai is unique among European design studios. The entire ICONA Shanghai team – and not just its commercial office – is based permanently in China in the heart of Shanghai’s Pudong district.
Through its integrated partnership with sector leaders Tecnocad Progetti and Cecomp located in Torino (Italy), ICONA Shanghai offers complete engineering support to integrate feasibility into styling from the early stages and provides design models to complex prototypes.
AIPA is a company association for the development of new powertrain concepts for race cars and production vehicles. Under the direction of Mr. Lombardi, AIPA brings together the expertise of Mario Cavagnero from Italtecnica in combustion engine development and prototyping, Beppe Volta in race car preparation and tuning, and Stefano Carabelli from Actua in mechatronic products to create innovative hybrid powertrains which are implemented on fully working vehicle prototypes.
rain.
Photo Credit: IconaVulcano.com
Related Posts

Mercedes-Benz Leaks Photos of the GLA Concept Before

2014 Maserati Ghibli Photos and Info Ahead of
prev next