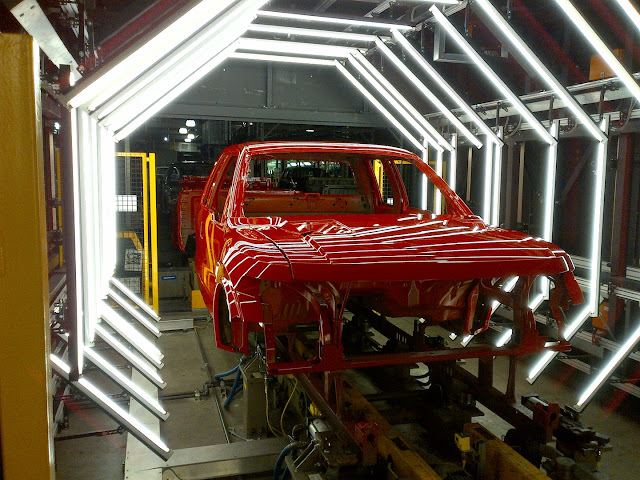 Now this is just cool.  Ford has rolled out a new system that uses a network of high-resolution cameras to create a 3D model of a car on their production line in order to identify and blast away any dirt on the paint surfaces.  And, not just a clump of gunk, mind you, particles smaller than a grain of salt. 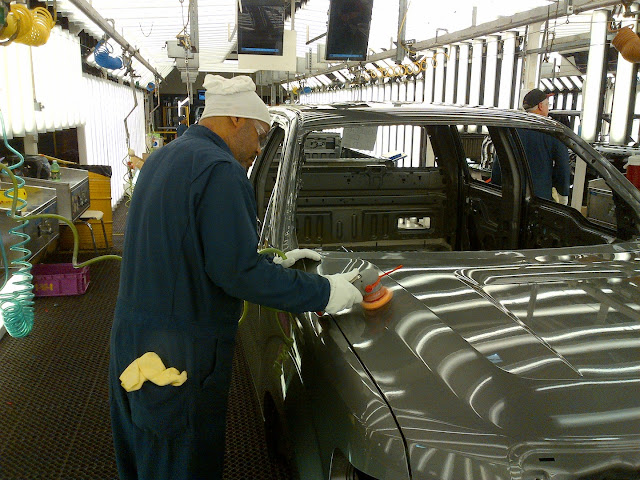 A digital imaging system that is paired with the cameras can scan over 3,000 images in 15 seconds (that’s 200 pictures per second) to seek out any unwanted stuff in the paint.  Ford claims that this new automated dirt-busting system leads to an 82 percent improvement in paint quality and customer satisfaction over the first year.

Here’s a quick video of how it works.  For more details, check out the press release below.

Here’s the dirt on Ford’s new paint technology: There isn’t any.

New Ford F-Series models are the latest vehicles to benefit from the company’s industry-first dirt detection technology to ensure optimal paint and surface quality. The system uses high-resolution cameras and reflected light to digitally identify surface imperfections finer than a grain of salt in final vehicle assembly, and to cue operators where to polish and buff out imperfections.

How it works
Ford’s dirt detection technology takes microscopic scans of each painted vehicle surface, and then cues final assembly operators to address repairs where necessary. In the past, paint and surface inspections were based on human-eye examination.

The 3D imaging system applies varying degrees and angles of light while scoping the paint surface of vehicle bodies to identify dirt in paint and other irregular paint conditions. High-resolution images – 3,150 images are captured in 15 seconds for every vehicle made – are stitched together for a full 3D image that is digitally compared to a perfect computer model.

The dirt on the dirt
Dirt particles in paint are difficult to manage with conventional quality control methods. Minute particles can enter a shop floor from multiple environmental sources, machinery or workers, which makes paint quality one of the toughest variables to control in production. Along with Dearborn Truck Plant, the automated inspection system is now being used in the United States at Ford’s Kentucky Truck Plant.

“This is one of the most exciting integrations of optical science and digital technology in the automotive industry,” said Dougan. “By combining innovations in vision technology, processing speed and software, Ford continues to invent new technologies that give our customers better paint quality and surpass competitor offerings.”

Locations
Globally, dirt detection technology is used at three Ford assembly plants. Here are the plants and the vehicles built there:

The technology launches later this year at these plants:

In 2014, Ford will launch dirt detection technology at the following plants:

ROUSH Perfomance Gets Their Hands on a Ford