Zipp.  If the Dodge executives, back in 1959, had listened to focus groups an iconic and successful car would have been called the Dodge Zipp.  Thankfully, cooler heads prevailed and the Dodge Dart was born.  Or, should I say re-born?

The Dart name was first used by the Chrysler Corporation on a 1957 concept car, the Chrysler Ghia Dart, designed by the celebrated Italian design house and coachbuilder Carrozzeria Ghia (who also penned the controversial VW Karmann Ghia).  Interesting that the first Dart had its origins in Italy, Turin to be precise, which happens to be the home of FIAT, the Chrysler Group’s parent company and the driving force behind the resurrected 2013 Dodge Dart.

When Turin Italians and the Dodge Detroiters team up, you get a Dart.  The original Dart had its highs (the Hurst-Built Super Stock 426 Hemi Dart) and its lows (anything after 1973), but is the 2013 Dodge Dart any good?  In a word, yes.  But, to better understand where it’s coming from, let’s take a look at the history behind the Dart nameplate in this handy and easy to follow “Timeline-o-Dodge-Dart”.
–>

1960 — Dodge Debuts the Dart (thankfully not the Dodge Zipp) on a 118-inch wheelbase Plymouth frame as their entry-level fullsize model. Coupe, Sedan and Wagon options are available with powerplant options of a 225 cubic-inch slant six (new for 1960), a 318 cubic-inch V8 or a 361 cubic-inch V8.  1960 also introduces unibody construction.

1962 — The Dart becomes a mid-size B-body car with a 116-inch wheelbase.  A two-door convertible is added to the mix.  Size is down, but power is up with the optional 413 Ramcharger V8 pumping out 415 hp.  Dodge Design Chief Virgil Exner is fired.

1963 — Another year, another body change.  The Dodge Dart takes the place of the 2nd generation Lancer and is now an A-body with a 111-inch wheelbase.  The Charger option becomes available on the 273 cubic inch V8 Dart GTs.  This is the first use of the “Charger” moniker on a Dodge.  New Chrysler Design Chief Elwood Engel oversaw the design of the 1963 Dart as well as the Chrysler Turbine.  Engine options are 170 cubic-inch or 225 cubic-inch slant six.  The Dart GT coupe/convertible gets a 273 cubic-inch V8.

1965 — The Dart becomes available in Spain, assembled by carmaker Barreiros and uses difference sheetmetal from the U.S. version.

1969 — This year only a 440 cubic-inch big-block is available on the Dart.  With such a large block, there is no room for a power-steering rig resulting in manual steering only.

1970 — New front and rear bumpers for the Dart.  1970 also sees the debut of the sporty variation on the Dart, the Dodge Dart Demon, which is basically a Plymouth Duster with a Dodge front clip and vertical taillights.  Dodge drops the GTS and 383 cubic-inch V8.  All Dart coupes become Dart Swingers.  The biggest engine option is the 340 cubic-inch V8.  A 198 cubic-inch slant six (essentially a 225 with a shorter stroke) .

1973 — Thanks to the new federally mandated regs, the Dart is fitted with new front and rear bumpers along with a new grille and hood. Due to complaints about the name the Dart Demon is renamed the Dart Sport.

1974 — The limited edition Hang Ten model Dart Sport is introduced midyear continues through 1975. The Hang Ten comes with a folding rear seat for easy surfboard transportation and a stickered pinstripe ending with a surfer on a wave.  Gnarly, Dude.

1976 — The final year of the Dart in the U.S. and the only year of the 225 cubic-inch slant six Dart Lite which uses aluminum to lower the curb weight and high rear-axle ratios to reach 36 mpg on the highway.  Sounds familiar.  1976 also sees the Spirit of 76 Bicentennial model.

1981 — Dodge Diplomats are sold as M-Body Darts in Mexico. Brazilian A-body Dart production ends.
1982 — The Dodge 400/Chrysler LeBaron are sold as the Dart K in Mexico. 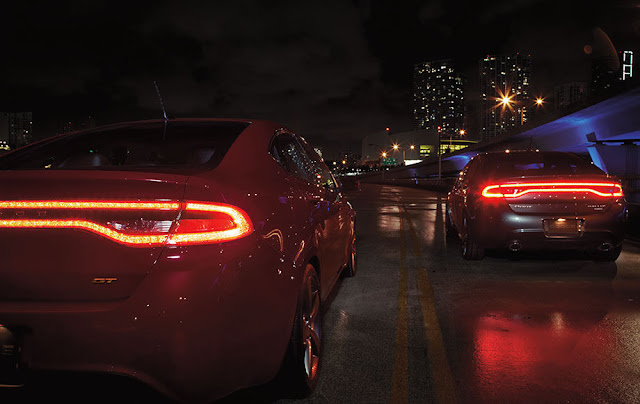 2013 Dodge Dart
From a smaller-but-still-full-size sedan in 1960 to an all-out muscle car quarter-miler to merely a nameplate on a re-badged LeBaron, the Dodge Dart has had its share of evolutions and, in some cases, devolutions.  So, does the 2013 Dodge Dart have the competitive soul of the Super Stock 426 Hemi Darts and the Dart GTS or the melancholy persona of the 1976 Dart Lite?

Well, thankfully for the folks at Dodge, who need a banner car to usher them into the Chrysler-FIAT era, the 2013 Dodge Dart (as the newest of Darts and the first child of the Detroit-Turin marriage) is really quite good.

Overview
Due to the partnership with FIAT, Chrysler was able to design the 2013 Dodge Dart in only eighteen months by basing it on the Alfa Romeo Giulietta, one of the best platforms on the road today.  The front-wheel-drive Dart’s wheelbase is 2.7 inches longer than the Giulietta’s at 106.4, overall length is up over a foot at 183.9 inches and width plus 1.2 at 72 inches.  With a cabin and trunk volume of 110.3 cubic feet, the Dodge Dart beats its top rivals, the Ford Focus, Honda Civic and Toyota Corolla.

Models
With the breadth and depth of the varied needs and wants of the compact sports sedan market today, Dodge is offering the Dart with a cavalcade of models (Seven), colors (Fourteen) and powertains (Six) not to mention a long list of options.

The base Dart SE starts at $15,995.  The SE is powered by a 160 horse 2.0L DOHC I-4, called the Tigershark.  The 16-valve short-stroke engine with aluminum block and head has variable valve timing and port injection.  Power is sent through a 6-speed manual gearbox.

Next up the line is the $17,995 Dodge Dart SXT.  For the addition $2,000 the SXT comes standard with 17 inch aluminum wheels, power mirrors and locks, a six-speaker entertainment system, remote keyless entry and a split-fold rear seat (kinda reminds you of the Dart Hang Ten).  The option list grows to include an 8.4 inch touch screen on the center stack, nav system, rearview camera (a rarity on compact sedans) and a 506 watt 10 speaker (including subwoofer) sound system.

The Dart Rallye falls in the middle of the line at $18,995.  You can tell the Rallye by its aggressive looking front-end, projector fog lights, dual exhaust tips, leather-wrapped steering wheel with audio controls.  The Dart Rallye also has the option of the 1.4L turbocharged four-cylinder SOHC powerplant stolen from the Fiat 500 Abarth good for 160 horse and 184 lb-ft of torque.

The most fuel efficient of the 2013 Dodge Darts is the AERO at $19,295.  The Dart AERO will get up to 41 mpg on the highway using the 1.4L intercooled MultiAir Turbo I4.  Active grille shutters (so cool) and an underbody aero kit give the AERO is increased fuel efficiency.

Slide into the seat of the Dodge Dart Limited, which starts at $19,995, and you get a ten-way power adjustable driver seat, a customizable instrument cluster, chrome trim as standard.  On the options front, nappa leather seats, heated seats and steering wheel, nav system, rear cross-path detection and shiny aluminum wheels can also be yours if the price is right.

Finally, at the top and due out later this year is the Mopar ’13 Dart.  Don’t know the price yet, but rest assured it will be north of the Dart R/T’s $23,290 price tag.  This limited edition Dart extraordinaire debuted earlier this month a the Chicago Auto Show.  Production, which begins this spring, will be limited to 500 cars.  Mopar 18-inch gloss black wheels, Mopar blue racing stripes on black paint, black chin spoiler, rear diffuser and spoiler and Mopar badging complete the exterior look.  To give the car an extra bit of oomph, the Mopar ’13 Dart gets performance tuned exhaust, slotted brake rotors, a lowered suspension, recalibrated steering and a 1.4L MultiAir inline four-cylinder from FIAT.  Inside you get all sorts of Mopar goodies like a bright blue driver’s seat, Katzkin leather-trimmed interior, serialized number plate, sport pedals, a very cool wireless phone charging pad and Mopar blue contrast stitching throughout.

Across the board, a FIAT-sourced six-speed manual is standard.  A six-speed Powertech automatic is optional for all Darts except the 1.4L equipped models which gets a FIAT-sourced dual-clutch.

Interior
Since the Dodge Dart’s death in the United States in 1976 and its slow, painful end in Mexico in 1989, Dodge has offered two compact sport sedans with varied success, the Dodge Neon (1995 to 2005) and the Dodge Caliber (2007 to 2012).  While the top-of-the-line Neon SRT-4 and Caliber SRT-4 were pretty good cars inside and out, the workaday Neons’ and Calibers’ interiors were a plasticky, dreary place to be.  Not so with the 2013 Dodge Dart.

On first blush, it certainly seems like the designers charged with the Dart’s interior took a page from the European playbook when penning the cabin.  Bright colored interior accents and contrast stitching hearken to the Dart’s angrier cousin, the SRT Viper and breathes life into the car’s interior.  Background lighting tops it all off quite nicely.

The seats up front are the right blend of comfy and supportive with lateral and longitudinal bolstering that make you feel secure in a fast right-hander but not so tight you feel like your getting a bear hug from your Aunt Helga.  In back, however, there may be three seat-belts, but more than two adults is a tight squeeze.  Under the passenger’s hind quarters is a clandestine storage compartment (read: Fast and Furious style compartment for a couple of NOS 50 shots) and the glove box is big enough to hold an iPad.

The driver’s seat is the place to be.  Look ahead and on the top trim levels you see a seven-inch instrument cluster with a choose-your-own secondary instrument display and trip meter.  An 8.4 inch touch screen on the center stack handles your in-car electronic needs.  The steering wheel is a great thickness with leather wrapping to please the most picky automotive enthusiast.  The dead pedal is just the right height, comfortable while touring but a good brace on the turns.

Safety
The 2013 Dodge Dart comes with tire pressure monitoring and a 10-airbag pillow of safety, which, by the way, out-safeties its German counterparts.  Optional blind-spot monitoring (a rarity in compact sedans) and rain sensing wipers come as options.

Verdict
Driving the Dart is a pleasure.  I was able to test out a Dodge Dart Rallye equipped with the 1.4L and six-speed manual gearbox.  The transmission is very smooth shifting through the gears; far smoother, in fact, than I expected.  Although, the clutch pedal is a bit mushy, hearkening to that of a VW Jetta SE.  The 1.4 pulls well throughout the range.  At the low end, around 1,400 rpm, I was very impressed by the Dart’s grunt.  Getting to the redline of 6,200 rpm you really see why the little FIAT-sourced engine is so widely loved.

On the road, the 2013 Dodge Dart brake well, turns in sharply, smoothly and without fuss and holds the road with little body roll.  The front wheel drive set-up is drama free with very little torque steer to be found thanks to ZF rack-and-pinion electronically assisted power steering, front suspension struts and monotube dampers.  The road feel is detailed and very good, far better than other compact sedans I’ve driven.  Overall, the car feels stable and happy on the road.  It’s a fun car, and I am quite eager drive the Dart R/T when its released later this year.

With the 2013 Dodge Dart, the Dart has has completed the evolution from a full-size entry level car to a scrappy compact sedan fully capable of taking on the big kids from the U.S., Europe and Asia.  Not bad for a car that was supposed to be called the Dodge Zipp.

Fiat Buys Balance of Chrylser in a $4.35