Every year, 150,000 crazed Volkswagen diehards swarm the city of Rinfnitz, Austria for the Wothersee festival where VW GTI lovers from all over commune with their overlords, VW’s engineers and designers.  And, every year, the folks at Volkswagen bring a bonkers concept car to debut to these most adoring of fans. 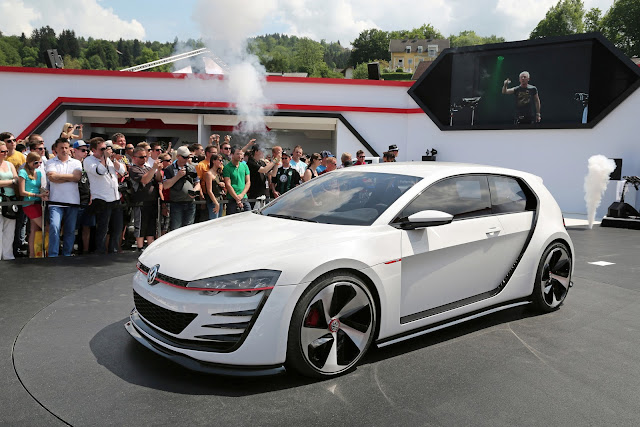 This year, that concept car was the Volkswagen “Design Vision GTI,” a veritable race car.  Created by a design team led by Head of Design for VW Klaus Bischoff, this car is a stunner.  And, with 503 horse and 413 pound-feet of torque from a 3.0 liter direct-injection TSI V6 with two turbos, the “Design Vision GTI” is a beast on the track, too. 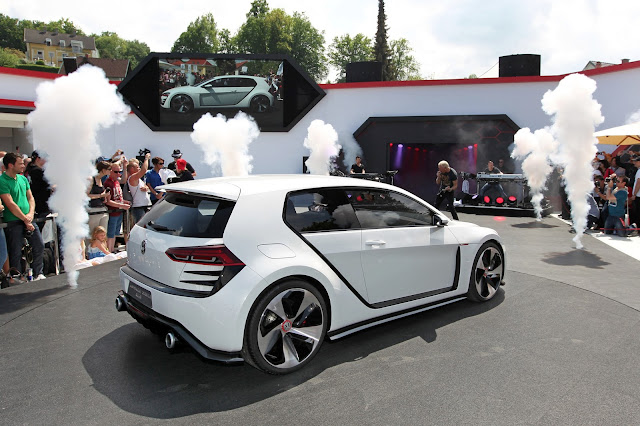 The concept racer sprints from 0-62 in just 3.9 seconds, about two seconds faster than the regular GTI, thanks to all that power and grunt being routed through a DSG dual-clutch trans and all-wheel-drive.  Top speed is a tremendous 186 mph.  Yeah.  186.  From a GTI.  So want one.  Slowing the über GTI are carbon-ceramic brakes (15.0 inches up front and 14.0 inches in back). 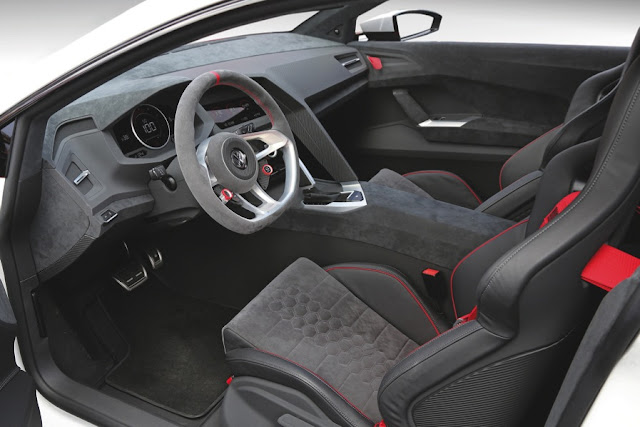 The “Design Vision GTI” is beautiful, inside and out.  Just look at it.  It even has helmet tie-downs in the boot.  The engine bay isn’t half bad either.  For more info, the VW press release is below for your perusing under the gallery. 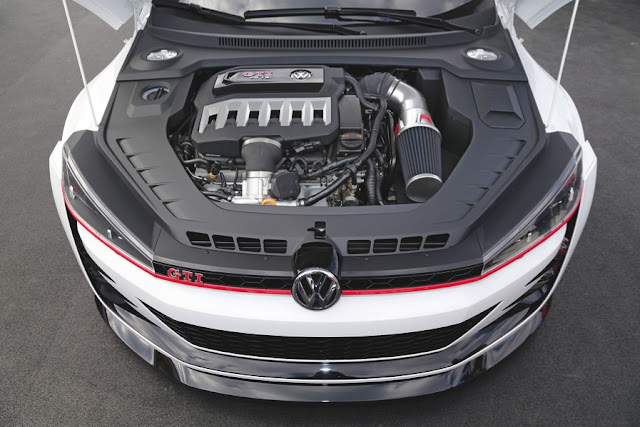 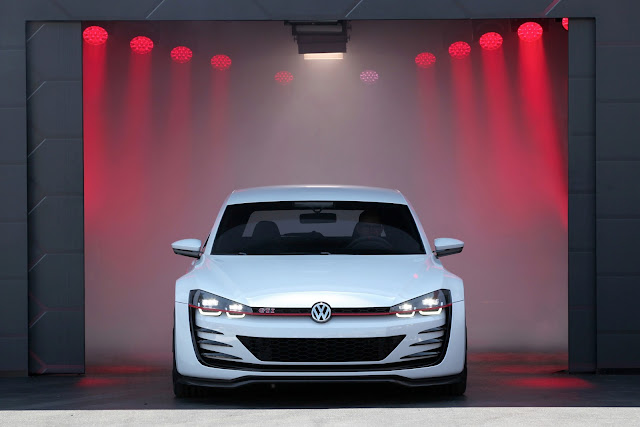 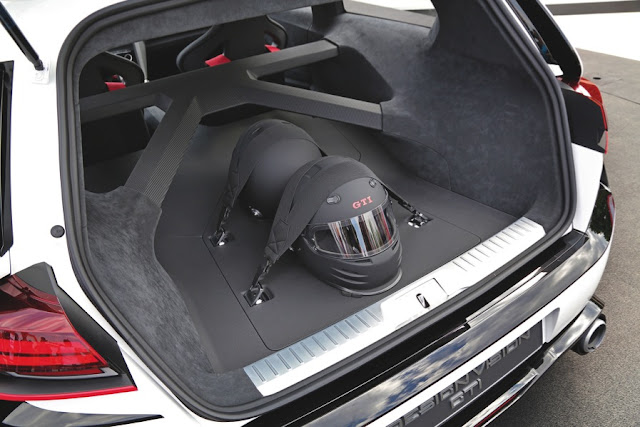 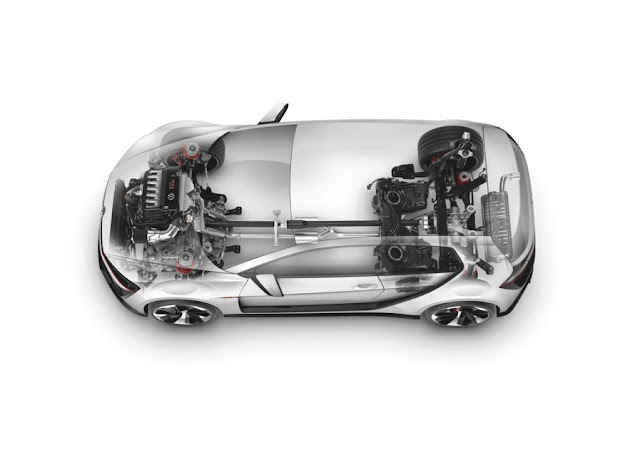 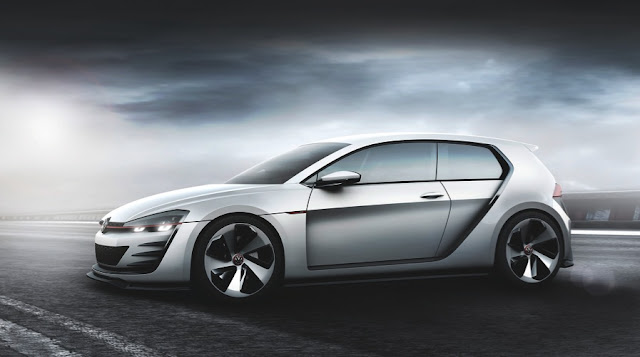 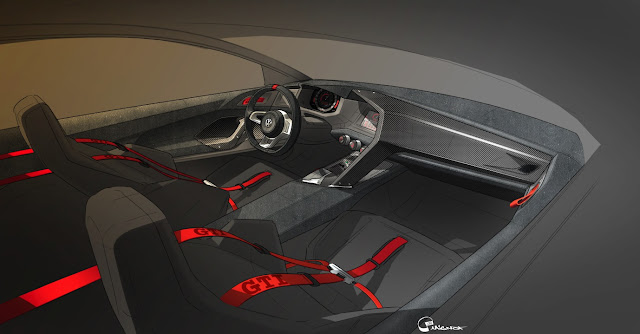 Press Release
Wolfsburg/Reifnitz, May 2013 — From May 8th through the 11th , 150,000 passionate fans turn the Austrian city of Reifnitz into a veritable Mecca for the Volkswagen GTI. One of the traditional highlights at the Wörthersee festival is a concept car that’s conceived especially for the meeting by Volkswagen engineers and designers. This year, the concept is a race car — the “Design Vision GTI”.
The striking “Design Vision GTI” is based on the seventh-generation GTI. The design team, led by Klaus Bischoff (Head of Design of Volkswagen Brand), has drawn the C-pillars and sills outward as autonomous body elements, thus creating space for substantially wider front and rear tracks, as well as specially developed 20-inch wheels (with 235 tires in the front and 275s at the rear). The “Design Vision GTI” can reach a top speed of 186 mph and looks as if it could start racing tomorrow.

Drive system
Although the new GTI has plenty of power in standard form, with up to 230 hp available on the Performance model, the “Design Vision GTI” ups the ante with 503 hp, developed at 6500 rpm. Just like the engine in the regular GTI, the concept car has a turbocharged and direct – injection TSI® engine — in this case, a 3.0-liter V6 instead of a 2.0-liter four cylinder, using twin turbochargers. Two three-way catalytic converters are arranged close to the engine to optimize emissions behavior. The V6 TSI develops 369 pound-feet of torque from as low as
2000 rpm, with a maximum figure of 413 lb-ft at 4000 rpm.

All this power and torque is distributed to the wheels via a DSG® dual-clutch automatic transmission and an all-wheel-drive system. With this powertrain and a specially tuned chassis, the “Design Vision GTI” eats any type of racetrack. On a dragstrip, it will reach 62 mph from a standstill in an impressive 3.9 seconds

The “Design Vision GTI” wheels, derived from the “Austin” GTI design, feature integrated blades that are designed to vent hot brake gas through the wheel openings. The wheel bolts are covered to give the appearance of a center-lock design.

Visionary exterior
Two things are obvious when seeing the “Design Vision GTI” for the first time. First , the car is a Volkswagen. Second: it’s a GTI. This visual clarity is part of Volkswagen’s success, according to Klaus Bischoff. “Our claim to be a global player is enhanced with our universal design language. A design that immediately communicates the brand’s identity is central for all models that carry the VW logo, with elements that allow each model to be recognized as a true Volkswagen by its distinctive design.”

Dimensions: The production GTI has extremely crisp proportions, making it a good starting point for an even more extreme version. The “Design Vision GTI” looks radical, because it’s shorter, wider, and lower than a regular GTI. It’s 0.6 inches shorter at 167.4 inches, thanks mainly to a more compact rear bumper treatment. The GTI concept is no less than 2.2 inches lower, at 54.5 inches, and it’s 2.8 inches wider (73.6 inches). The track has also increased, of course: at the rear it is now 62.2 inches (59.7 for the production GTI) and 62 .8 inches at the
front (versus 60.6).

Styling: Developing a show car for the GTI meeting at Wörthersee is always a great opportunity to package extreme ideas and a lot of emotion. Klaus Bischoff says: “The design team’s brief was to give a spectacular glance into the future of the GTI.” Marc Lichte, Andreas Mindt, and Philipp Römers, the same team who developed the latest Golf and the new GTI, also collaborated in the development of the “Design Vision GTI”, breathing the charisma of a race car into the concept.
The color scheme for the “Design Vision GTI” is nothing if not classic. It follows the traditional GTI triad of “black-white-red.” The paint is white (“White Club”), the add-on parts are black (“piano paint black”), and the GTI insignia as well as the strip integrated in the front are red.

The C-pillar, which has always been a distinctive Golf and GTI feature, is drawn outward as an autonomous design element, while the main part of the body narrows strongly towards the rear. This process starts right behind the front wheel with a vertical air outlet that emphasizes the waisted doors. In parallel to that, the sill grows continually outward until its upper edge merges with the C pillar — a styling device that gives this GTI a very dramatic look.

The GTI concept’s front end is similarly sculptural. The radiator grille, the bottom air inlet, and the brake cooling vents are combined with the headlights and framed by the front fenders and the hood. The precision and straightforwardness of the lines follow the Volkswagen design DNA. The grille and air inlets — although re-interpreted — consciously underscore their relation to the production GTI’s. The so-called “blades” are an especially prominent detail.

The GTI’s typical red line divides the headlights of the “Design Vision GTI” horizontally. The actual lighting elements are set back, giving the “eyes” depth — an innovative variation of the “evil eye” popular with GTI customizers.

Like the front end, an all-round sharp edge is a consistent feature at the rear. The taillights straddle the space between the C-pillars and the rear deck, while the integrated rear spoiler has the same position as the production GTI’s. At the bottom of the car, the dominant elements are the aerodynamically conceived ribs of the rear diffuser and the exhaust tips that frame the assembly.

Interior design
Tomasz Bachorski, Head of Volkswagen Interior Design, asked his team to follow these guidelines: “Pure GTI. Concentrate on the truly essential. But with style.” Boris Grell, Jan Haacke, and Guillermo Mignot, the designers of the GTI concept’s interior, are totally in tune with Volkswagen interior design and know how to match the interior to the character of each vehicle they work on, from the up! to the Phaeton.

The “Design Vision GTI” applies a radical version of “reduced design”. This means as few switches as necessary, so that they can be operated intuitively even while driving hard. The steering wheel is equipped with ergonomically optimized DSG paddle shifters, for example.

The designers have integrated a number of controls into the upper section of the center console: the switches and rugged turn knobs for climate control, the hazard light switch, and the activation for the on-board camera. An electrical kill switch, a push-button for the fire extinguisher and the ESP deactivation are housed underneath. The car has three drive modes: “Street,” “Sport” and “Track”.

The shapes of the dashboard and the center console correspond to the GTI’s, but are even more driver oriented, with tauter surfaces and harder edges. The race-car impression is reinforced by the partial use of carbon fiber, which is combined with “Anthracite” and “Titan Black” Alcantara as well as “Black” and “Flash Red” Nappa leather. One pleasing detail on the doors is a red loop that forms the handle, just like a Porsche Cup car. The rear seats have gone, their space taken by an X-shaped cross member that further strengthens body stiffness.

The designers also wanted to show how they imagine the “Design Vision GTI” could be used to network with the social community: A large display to the right of the main instrument binnacle also shows a track map of the circuit you are running, along with lap times. This can also communicate with other vehicles on the course and calculates what’s going on in a race in real time. Anybody wanting to share the on-track action can direct the cameras integrated into the A-pillar either to the track or the interior.

6 Best Car Commercials from the Past 6