Turbo lag is easily the biggest problem with traditional turbocharged engines.  In some cases, it’s downright dangerous.  I remember one time, the passenger of a 2003 Porsche 911 Turbo, a 996 to be precise, attempting to merge from the George Washington Memorial Parkway onto the 14th Street Bridge in downtown DC.  Those familiar with that particular interchange can already see where I’m going.  But, for those who aren’t, allow me to explain. 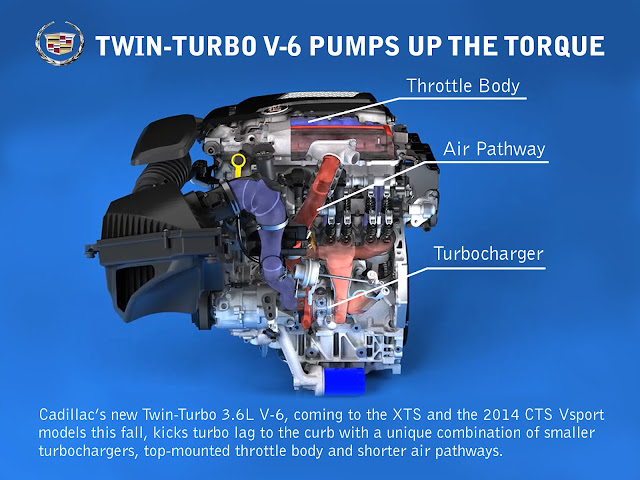 The 14th Street Bridge is wide, like five lanes wide.  To get to where we was going, we had to cross all five lanes in the span of a few hundred yards.  So, the driver got on the gas and this little Porsche barely started moving.  Not good.  All of sudden, the tach climbed high enough and bam… we rocketed off at quite a good clip… Soooooo close to hitting the car in front of us.  So, yeah turbo lag is a real bummer.

Fortunately, engineers are really learning how to defeat the evils of turbo lag once and for all.  Enter Cadillac.  Next year, Caddy is putting a twin-turbo V6 into their XTS Vsport and CTS Vsport.  I’m all for this.  Despite my earlier encounters with them, I love turbos, especially modern ones that claim to “kick turbo lag to the curb”.

This 420 horse, 430 pound-foot V6 is Cadillac’s first twin-turbo, and from what I can tell, it’s a good one.  Cadillac engineers developed a turbo system that uses two smaller quick-spooling turbos, ditches the usual circuitous heat-exchanger, uses shorter air pathways than traditional systems and has a very quick route to the top-mounted throttle body.

According to Cadillac: “By creating a very short path from the turbos to the throttle body, the compressors are able to draw air directly from the inlet box and send pressurized air through the intercooler immediately.”  What that means is peak torque is available between 1,900 to 5,600 rpm.  That’s practically boost-on-demand.

Better performance on the road and more power, quicker.  Is any of this actually better?  On paper, oh yeah.  One the road?  We’ll have to wait until the CTS Vsport and XTS Vsport hit the roads.  Until then, take a look at these videos which probably explain Cadillac’s twin-turbo V6 way better than I do.

Press Release
Efficient air flow delivers better torque response for CTS Vsport, XTS Vsport
DETROIT – Turbocharging increases power and performance with efficiency, but the delay in the delivery of power – known as “turbo lag” – has historically been its key limitation.
That’s about to change.
Cadillac’s first-ever Twin-Turbo, available on the 2014 CTS Vsport midsize luxury sedan and XTS Vsport full-size luxury sedan in the U.S. this fall, kicks turbo lag to the curb with a unique combination of smaller turbochargers, top-mounted throttle body and shorter air pathways.
The Cadillac Twin-Turbo V-6’s patented air flow design, which eliminates circuitous heat-exchanger tubing, makes the most of engine packaging efficiency to improve torque response time over other air flow designs.
Rated at 420 horsepower in the all-new 2014 CTS Vsport and paired with Cadillac’s first eight-speed transmission, the Twin Turbo is one of the most power-dense engines in the midsize luxury sedan segment, rated at an SAE-certified 420 horsepower (313kw) and 430 lb-ft of torque (583 Nm).
Air flow routing volume is reduced by more than 60 percent when compared with a conventional design that features a chassis-mounted heat exchanger. The water-to-air cooler system achieves more than 80 percent cooling efficiency with only about 1 psi (7 kPa) flow restriction at peak power for fast torque production.
“By creating a very short path from the turbos to the throttle body, the compressors are able to draw air directly from the inlet box and send pressurized air through the intercooler immediately,” said Richard Bartlett, Cadillac assistant chief engineer for the 3.6L engine. “This gives the driver a more immediate feeling of power on demand.”
Using two smaller turbochargers rather than a single, larger turbo also helps ensure immediate performance because smaller turbochargers spool up quicker to generate horsepower-building air pressure that is fed into the engine. An integrated charge air cooling system also contributes because the compressors blow through very short pipes up to the intercooler.
The single, centrally located throttle body atop the engine controls the air charge from a pair of turbochargers after the temperature is reduced in the intercooler. This design fosters more immediate torque response and reduces complexity by eliminating the need for a pair of throttle bodies.
Together, smaller turbochargers, top-mounted throttle body and shorter air pathways help sustain peak torque over a broad range – 1,900 to 5,600 rpm – for a confident feeling of power in almost all driving conditions, such as accelerating or overtaking traffic on the highway.
“The Cadillac Twin-Turbo intercooler design builds on our experience with the 6.2L supercharged engine used on the current CTS-V Series,” Bartlett said. “That means more performance for drivers without sacrificing efficiency.”