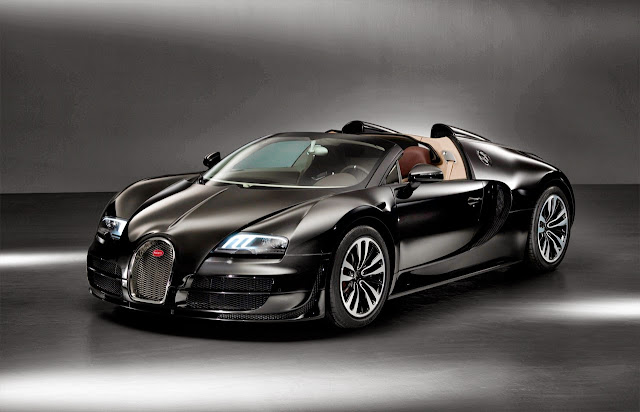 About a month ago in Pebble Beach, Bugatti pulled the silks from their first limited edition Veyron of the Bugatti Legends series, the Bugatti Veyron Grand Sport Vitesse Jean-Pierre Wimille.  That bright blue Veyron paid homage to the 24 Hours of LeMans winning Bugatti test driver of the same name. 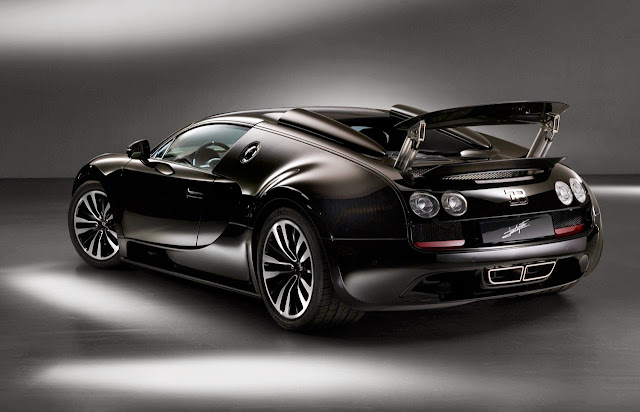 Yesterday (or was it earlier today? Stupid time zones!), the second Veyron of the Legends series made its first appearance.  This one is called the Bugatti Veyron Grand Sport Vitesse Jean Bugatti.  (Seriously, what’s with all the “Jeans”.  Kinda stereotypical for a French car company, don’t you think Bugatti?)  FYI, Jean Bugatti was the son of Bugatti’s founder and the designer of the most iconic Bugatti ever, the Type 57SC Atlantic. 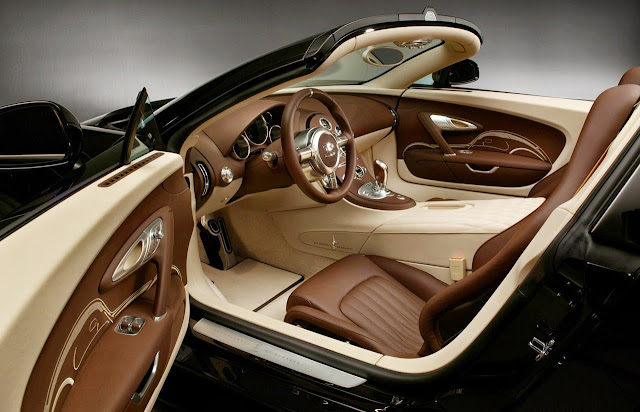 Unlike the very blue Veyron of Jean-Pierre Wimille, Jean Bugatti’s Bugatti is very, very black, drawing inspiration from Jean Bugatti’s personal car, a 57SC called La Voiture Noire (or The Black Car for those non-Francophonics out there.) 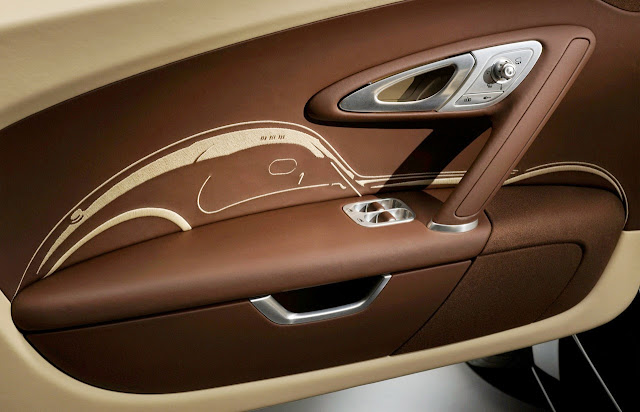 This car is probable the best looking Veyron to date.  I guess, what else would you expect from a limited edition car honoring Jean Bugatti, himself?  The body of the Bugatti Grand Sport Vitesse Jean Bugatti consists of acres and acres of shiny black carbon fiber.  But, what truly sets this car apart are the grille surround and badges.  They’re platinum.  Yes, platinum.  I think that may be Bugatti’s way of saying “bite me Koenigsegg Agera S Hundra!” 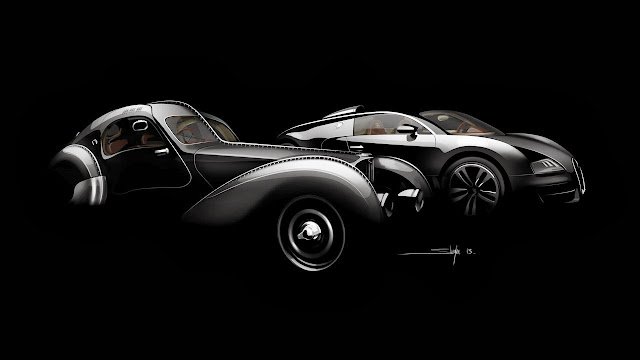 To drive the point home that this is Jean Bugatti’s car, his signature is engraved into the fuel and oil caps as well as on the door sill plates.  The interior is a two-tone brown and tan wonderland.  Perhaps the most striking interior feature is an embroidered silhouette of a Bugatti Type 57SC Atlantic on the door panel. 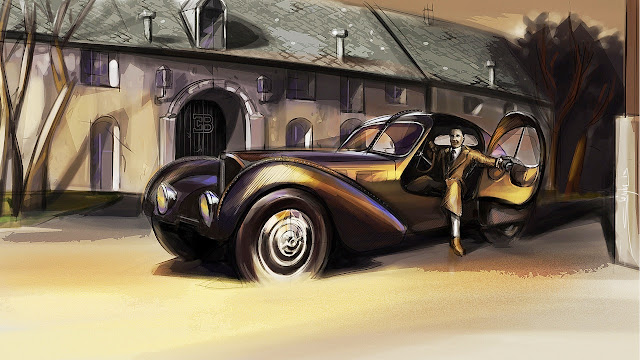 Power, as it is for all Veyron Grand Sport Vitesses, comes from the 8 liter W16 engine producing a massive 1,184 horse and 1,100 pound-feet of earth-moving, pavement-rippling, neck-snapping torque.  Yes, 0-62 is still 2.6 seconds (0-60 in ~2.4) and the top speed is still 253 mph.  Bugatti will make three Bugatti Veyron Grand Sport Vitesse Jean Bugatti Legend cars, each going for just over $3 million.  Be sure to check out this gallery.  With this car, Bugatti has managed to make the Veyron look fresh and new despite the advancing age of the model.
Press Release
IAA 2013: The Bugatti Legend “Jean Bugatti” receives its world premiere
– The second vehicle in this six-part edition pays tribute to Jean Bugatti, son of the company founder and creator of the Type 57SC Atlantic

– Production of the second model is strictly limited to a run of three vehicles, as it was with the first in the Bugatti Legend series

Molsheim / Frankfurt, 9 September 2013. Following the successful launch of its “Les Légendes de Bugatti” (Bugatti Legends) series a few weeks ago in Pebble Beach in California, Bugatti presents the second vehicle in this exclusive edition as a world premiere at the 65th International Motor Show in Frankfurt. The French luxury car manufacturer intends the Bugatti Grand Sport Vitesse “Jean Bugatti” to be a celebration of the oldest son of company founder Ettore Bugatti and his most famous creation, the Type 57SC Atlantic. Like all other five models in the Legend series, the “Jean Bugatti” is limited to three vehicles. It costs 2.28 million euros (plus tax and other charges).

With its “Jean Bugatti” Legend model, Bugatti pays homage to a prominent figure in 20th century automotive history. Gianoberto Carlo Rembrandt Ettore Bugatti, known as Jean, was the eldest son of Ettore Bugatti and the most gifted of his four children. From the late 1920s onwards, Jean used his own structural and design ideas to exert more and more influence over the development of the company located in Molsheim, Alsace. In 1936, he took over as head of the company at the age of 27. By the time of his tragic accidental death in 1939, Jean had secured his place in automotive history thanks to his pioneering engine and chassis designs and concepts for vehicle bodies.

“Jean Bugatti is a Bugatti legend,” says Dr Wolfgang Schreiber, President of Bugatti Automobiles S.A.S. “Along with his father Ettore, Jean played a critical role in shaping our brand. Jean managed to combine the artistic roots of Bugatti with his father’s innovative automotive technology, and from that developed a design which is still reflected in the brand today, finding expression in our brand values of ‘Art, Forme, Technique’.”

One of the most extraordinary designs created by Jean Bugatti has to be the Type 57SC Atlantic, one of the most exclusive and exceptional sport coupés ever built and ranking among the most expensive vintage cars in the world. The Legend vehicle to be unveiled in Frankfurt is a call back to La Voiture Noire (‘The Black Car’), an Atlantic model which was driven by Jean Bugatti himself and has been lost since the Second World War.

“The Bugatti 57SC Atlantic is an icon. For many, it is one of the most elegant and valuable sports cars in automotive history,” asserts Wolfgang Schreiber.

“Jean Bugatti was a gifted car designer who knew to mirror the 1930s style of avant-garde in the design of the Bugatti car bodies,” explains Achim Anscheidt, Chief Designer at Bugatti. “His jet black La Voiture Noire was more than just Jean’s ‘private’ car. It was also his most impressive work of art – breathtakingly sporty dimensions paired with fluid, elegant lines and the unmistakeably expressive Bugatti DNA.”

Design: For the first time ever, the Bugatti horseshoe sparkles in precious platinumIn developing the Jean Bugatti Legend Edition, the designers at Bugatti aimed to follow the concept of its historic predecessor, the Type 57SC Atlantic La Voiture Noire, as closely as possible.

Exterior: The body of the Jean Bugatti Vitesse Legend Edition is constructed entirely from jet black, clear-coated carbon fibre, making it the embodiment of elegance and the apex of technical engineering. The use of platinum lends an air of extravagance to the vehicle, with the famous Bugatti horseshoe on the front grille and the EB logo on the rear taking on a resplendent appearance. Bugatti is using this precious material for the very first time on the exterior of one of its modern models.

The vehicle’s elegant, minimalist appearance is further punctuated by its wheels, which feature black diamond-cut rims.

In reference to the Legend Edition’s namesake, the signature of Jean Bugatti has been lasered onto the petrol and oil cap and painted Arctic grey.

Interior: The designers also took care to adhere to the motif of the historic La Voiture Noire as much as possible for the interior of the Vitesse Jean Bugatti Legend Edition. As such, it has been fully fitted out in leather. The Vitesse will also feature the same beige and brown tones that were present in the Type 57SC Atlantic. The seats, instrument panel, steering wheel, dash panel, centre console, door trim panels and windscreen crossmember are all rendered in chocolate brown.

As in the original vehicle, the chocolate brown is contrasted against the leather upholstery in a light beige silk colour across the extended centre console. This upholstery is continued in the footwell, the outer door trim panels and the handle recesses. The colour of the decorative stitching in the vehicle has been selected to complement the leather used.

The intricate, particularly eye-catching embroidery on the doors and the cover of the rear storage compartment once again harks back to the vehicle’s legendary predecessor, given that the side silhouette of the Type 57SC was embroidered onto the chocolate brown doors using contrasting beige silk thread. From a bird’s eye view, the Atlantic’s silhouette is immortalised using brown thread for decorative stitching on the rear beige-coloured storage compartment.

The results of this passion for detail and the desire to use the finest materials throughout the engineering process can be observed in the interior’s steering wheel as well – as for the exterior of the vehicle, the EB logo has been styled in gleaming platinum. Also staying true to the original Type 57SC is the selector lever, which is rendered in valuable rosewood.

Additional specific Legend Edition features in the vehicle include a leather insert embossed with the lettering “Les Légendes de Bugatti” in the extended section of the centre console, and door sill plate displaying the likeness and signature of Jean Bugatti.

A historic predecessor: the “Voiture Noire”Just four Type 57SC Atlantic vehicles in total were built between 1936 and 1938. Only two of these vehicles still exist today in their original condition. The Atlantic is the most famous version of the Type 57. At the time, Jean Bugatti wanted to offer a motorsport version of the standard model, thereby resulting in production of the SC version (SC stands for supercharged).

Jean Bugatti, whose skill in developing unique body designs was already proven by the Type 41 Royale, Type 55 Roadster and Type 50, was responsible for the shape and style of the Atlantic, which was intended to be extremely light and aerodynamic. Aluminium was the material chosen, giving the Atlantic its unmistakable design feature – a clearly accentuated dorsal seam which runs at a right angle from the windscreen to the rear bumper and effectively welds the two halves of the aluminium body together. This element continues to play a fundamental role in vehicles designed by Bugatti even today. As the floor of the vehicle sits between the longitudinal chassis members rather than on the frame itself, this means that the wheels are offset from the body and accentuated by enormous wings, thereby providing the car with a footwell. Seen from above, the extremely long bonnet flows to the rear of the vehicle in an oval shape, further highlighting the graceful and elegant design of the Atlantic.

The sport coupé was equipped with a straight-eight engine with 3,257 cm3 displacement, which produced 200 PS. However, even though it was able to reach speeds of over 200 km/h at the time, it was never entered into a race.

The specific Atlantic which served as the godfather of the Jean Bugatti Legend Edition is the legendary La Voiture Noire, which was the first of four vehicles produced in total. It belonged to Bugatti and was lost in transit amid the confusion of World War Two. The location and circumstances surrounding its disappearance are still shrouded in mystery.

BMW i3 Gets a Global Debut

Porsche Panamera Turbo S: A Peak Before Its

[Update: Price] BMW i8: The Full Skinny on
prev next