Audi TT Ultra Concept: The Leicht-est TT Yet Heads for the Worthersee Festival. 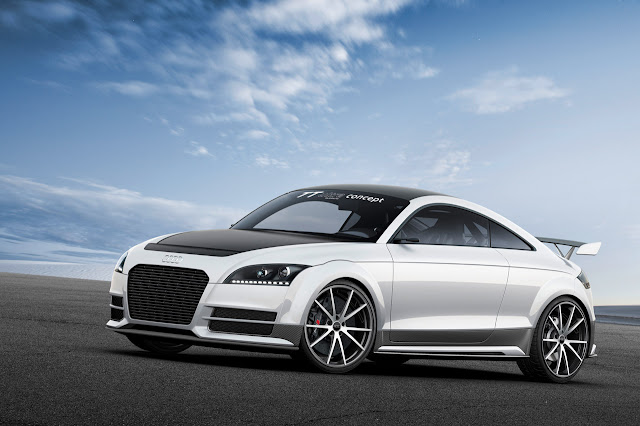 Volkswagen’s 2013 Worthersee Festival is coming up, and the kids at Audi created the ultimate TT to bring along, the Audi TT Ultra.  At 2,449 pounds, the TT Ultra is 661 pounds lighter than the regualr TT.  That is one leicht coupe. 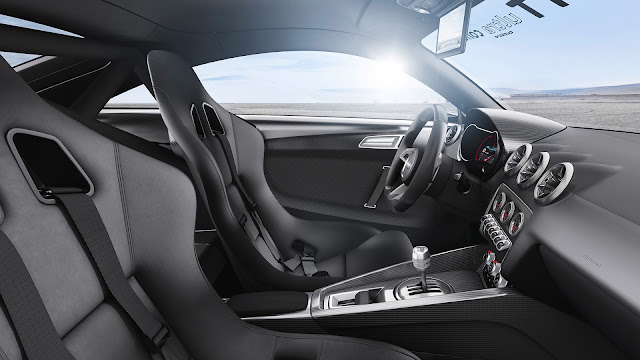 The TT Ultra takes lighter seats from the Audi R8 and uses carbon-fiber-reinforced polymer (CFRP) seat frames to shed fifty pounds.  220 pounds are trimmed from the TT’s body in the form of CFRP detachable parts, magnesium components, integrated CFRP & fiberglass-reinforced polymer (FRP) bits and super-sneaky re-engineering.  Toss in a lighter battery and a few extra-svelt mechanical parts like ceramic brakes and titanium exhaust and you wind up with an Audi TT superleggera. 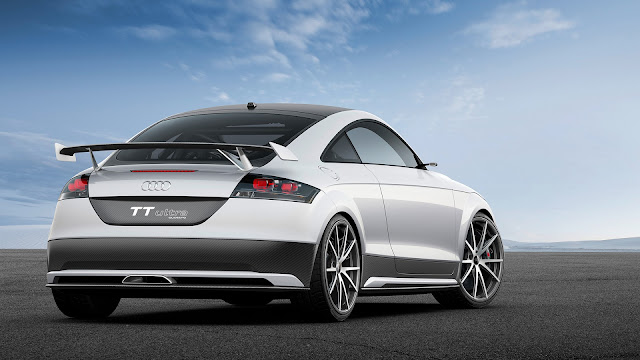 Power comes from a 310 horse 295 pound-feet 2.0 liter turbo four-cylinder.  The TT Ultra will sprint to 60 mph in 4.2 seconds and all the way up to a top speed of 173 mph.  That is one fast little car.  Oh, and be still my heart, the Audi TT Ultra Concept has a six-speed gated manual gearbox.  This car proves the low weight plus high power will win every time.  Check out Audi’s press release below for the full spiel.

Audi engineers are waging war on excess weight, and their latest victory is a TT 2.0 TFSI Coupe which has shed an incredible 300kg and gained a power upgrade to 310PS, giving it a 4.2-second 0-62mph sprint time and a top speed of over 170mph.

The TT ultra quattro concept is, as its name suggests, essentially a study developed for next month’s annual gathering of Audi enthusiasts in Wörthersee, Germany, but it demonstrates how an intelligent mix of materials can bring about considerable weight savings even in existing series-production models. Work on the deployment of these materials could conceivably inform the development of future low-volume Audi model series.

The showcar tips the scales at a lean 1,111kg, an impressive achievement considering it combines its potent petrol engine with quattro all-wheel-drive. With 310PS and 400Nm of torque to propel this pared back mass via a six-speed transmission, the result is a highly impressive power-to-weight ratio of 279PS per ton, a blistering 4.2-second 0-62mph acceleration time and a top speed of 173mph.

The four-cylinder engine raises its game thanks to modifications to the crankcase, the crankshaft, the balancer shafts, the flywheel, the sump, the bolts and certain ancillary units that help to reduce the unit’s weight by 25 kilograms.

No detail was too small to escape scrutiny during the optimisation process that culminated in the TT ultra quattro concept. With its innovative hybrid body shell the fully fledged production TT already boasts a low body weight of 206 kilograms (excluding detachable body parts amounting to 98 kilograms) which bears testament to Audi engineers’ desire to account for every last gram.

The concept’s body structure sheds another 43 kilograms, and with the help of optimised detachable body parts achieves a total weight saving of 100 kilograms.
The use of carbon fibre-reinforced polymer (CFRP) in the rear end, the centre tunnel, the B-pillars and the roof contributes to this significant saving, as do magnesium components in the floor and in the hinge reinforcements.

The front brakes with their ceramic discs and aluminium fixed calipers also make a contribution, and there are savings to be found in the titanium exhaust system with its single centrally mounted tailpipe and the CFRP wheels with their high-strength aluminium spokes, which shave off a particularly impressive 20 kilograms.

Fibreglass-reinforced polymer (FRP) also replaces more conventional steel for the coil springs in the suspension, helping to further reduce unsprung masses. The core of the all-new springs consists of long glass fibres twisted together and impregnated with epoxy resin. A machine wraps additional fibres around this core, which is only a few millimetres in diameter, at alternating angles of plus and minus 45 degrees to the longitudinal axis. These layers support each other and act in either compression or tension. The use of FRP at this point cuts weight by 40 per cent while still permitting good operating characteristics.

To further hone the nimble handling which is already a TT trademark, the developers have also concentrated on distributing the remaining weight as effectively as possible by moving it to the centre of the car wherever it was practical to do so. The lithium-ion starter battery, for instance, is located in the interior under the driver’s seat. It is much smaller than a lead battery and weighs just under four kilograms (8.82 lb).
300kg total weight saving

Overall, these lightweight construction measures leave the concept car 300 kilograms lighter than the comparable series-production car, helping to minimise the inertial mass that the TFSI engine has to contend with during acceleration.

The exceptional calibre of the TT ultra quattro concept is reflected in its even more emphatic styling, the focal point of which is the large spoiler which gives a nod to its motorsport genes. The base of the rear wing is manufactured as a supporting component from milled aluminium, while the wing itself is made of visible carbon fibre.

The concept car is painted in the special colour crystal white, which is complemented by CFRP elements in the roof, the flanks and the tailgate. In the interior the same material also adorns the door trim, the centre console and the cross-bracing that replaces the rear seat bench. The standard front seats are also replaced by fibreglass-reinforced polymer (FRP) bucket seats from the R8 GT which help to reduce the all-up weight by a further 22 kilograms.

There are no compromises on equipment behind the headline-grabbing figures – air conditioning, electric window controls and an electromechanical parking brake are all included, and there are even innovations such as compact cameras in the doors which replace the exterior mirrors and transfer images directly into the digital cockpit.

6 Best Car Commercials from the Past 6

Bentley Greelights SUV for 2016
prev next