Audi and the Nürburgring go together like apple strudel and vanilla custard.  That the electric wündercar, the R8 e-tron, is Audi’s most recent offering to lap the ‘Ring is no surprise.  However, this latest iteration of the Bavarian buddy story is one for the record books.

Earlier today, the R8 e-tron, Audi’s all electric version of the phenomenal R8, set the world record for a production electric vehicle around the 12.92 mile Nürburgring Nordschleife.  With racer Markus Winkelhock at the helm, the R8 e-tron lapped the Nürburgring in 8 minutes and 9.099 seconds.  And, it did all 12.92 miles in eerie near-silence with no noise but tire squeal and the hum of an electric engine.
To give you an idea how fast that is relative to Audi kin, the R8 V8 clocked in at 8:04, the R8 V10 at 7:44 and the RS4 at 8:09.  Not bad.  And, best of all, it still looks like a proper Audi R8. 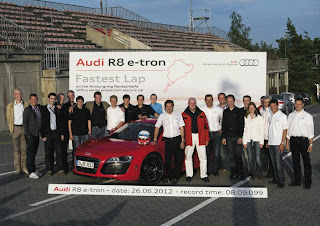 While not yet on sale, the Audi R8 e-tron that set the record “corresponds in every detail with that of the production model that will come on the market at the end of the year.”  Which means, we can look forward to 0-62 mph in 4.6 seconds, a top speed that’s governed to just under 125 mph coming from two 230 kW and 820 Nm electric engines.  The 134 mile range isn’t too bad either, although it is 111 miles shy of the electric Tesla Roadster’s 245 mile range.
As a ‘Ring world record holder, the Audi R8 e-tron should be quite a hit when it reaches the market and the end of this year.  Until then, we’ll just have to make due with the rest of the Audi R8 clan.  Darn.

The future of electric mobility at Audi is highly dynamic: The R8 e-tron has set a world record for a production vehicle with an electric drive system on the Nürburgring Nordschleife – the toughest test track in the world. Racing driver Markus Winkelhock piloted the high-performance, all-electric-drive sports car around the demanding 20.8-kilometer (12.92-mile) track in 8:09.099 minutes. With this Audi has achieved yet another milestone in its history, following overall wins at the 24-hour races at the Nürburgring and Le Mans.

“The R8 e-tron has given a magnificent demonstration of its potential on the toughest race track in the world,” said Michael Dick, AUDI AG Board Member for Technical Development. Dick, who completed a fast lap himself in the R8 e-tron, added: “The record-setting drive confirmed that we are on the right track. To us, electric mobility has never been about sacrifice, but rather is about emotion, sportiness and driving pleasure.”

A comparison with the current record lap driven by a combustion engined production car shows just how impressive the 8:09.099-minute time really is. The record time of 7:11.57 minutes was achieved with a Gumpert Apollo Sport, which is powered by a 515 kW (700 hp) Audi V8 gasoline engine.

The drive system of the Audi R8 e-tron that Markus Winkelhock drove to the world record corresponds in every detail with that of the production model that will come on the market at the end of the year. Both of the car’s electric motors generate an output of 230 kW and 820 Nm of torque; more than 4,900 Nm (3,614.05 lb-ft) are distributed to the rear wheels nearly from a standing start.

The R8 e-tron’s rechargeable lithium-ion battery stores 49 KWh of energy – enough for a distance of about 215 kilometers (133.59 miles). Its “T” shape allows it to be installed in the center tunnel and in the area between the passenger compartment and the rear axle. It is charged by energy recovery during coasting and braking. The ultralight car body of the Audi R8 e-tron is made primarily of aluminum, along with CFRP components; this is a main reason why the high-performance sports car weighs just 1,780 kilograms (3,924.23 lb), despite the large battery.

In order to further underscore the production-relevance of the R8 e-tron and the capability of its drive technology, Audi has set another record on the Nordschleife in addition to the single lap record time. Immediately afterwards, Markus Winkelhock drove two fast laps in one go in a second R8 e-tron that was limited to 200 km/h (124.27 mph). At 8:30.873 and 8:26.096 minutes, both laps were well under the important nine-minute threshold.

“The record drives were a fantastic experience for me,” said Markus Winkelhock. The 32-year-old, who lives near Stuttgart, has a high standard for comparison – the Audi R8 LMS ultra, in which he, along with Marc Basseng, Christopher Haase and Frank Stippler, won the 24-hour race at the Nürburgring a few weeks ago.

“Of course, the R8 e-tron is a production car, not a racing car with the assistance of aerodynamics,” Winkelhock emphasized. “But with its low center of gravity and rear biased weight distribution, it brings with it a lot of sporty qualities. The torque with which the electric motors propel the car uphill beats everything that I know – even if they make hardly any noise in the process, which at the start was really a completely new experience for me. In places where I really need traction, the torque vectoring – the displacement of the torque between the powered wheels – really helps me.”

Michael Dick proudly summed up events after the record-setting drive at the Nürburgring. “Within just a few weeks we’ve taken on some big challenges and in the process we’ve shown that we are at the forefront with all of our drive concepts,” he said, adding:”We won the 24-hour race at the Nürburgring in May in the Audi R8 LMS ultra with a ten-cylinder engine.

In mid-June we triumphed at the 24 Hours of Le Mans with the Audi R18 e-tron quattro – the first overall victory for a hybrid-electric vehicle in the toughest race in the world. And now we’ve set another record with the all-electric-drive R8 e-tron on the most demanding track there is.”