Ralph Gilles and the rest of the team over at SRT must have been stung pretty hard when the Corvette ZR1 beat the brand-spanking-new Viper in a head-to-head competition.  Because, they just lifted the cover off of one hell of an angry track-going snake, the SRT Viper TA.  “TA” stands for “Time Attack” (not “Totally Awesome” or “Terminal Acceleration”). 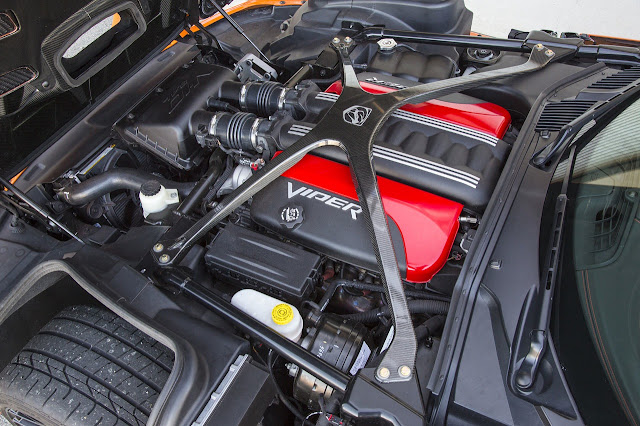 The Viper TA will make its public debut at the New York International Auto Show on March 27th and is officially the fastest road-legal Viper every produced.  SRT shaved a fair amount of weight from the base Viper to bring the Viper TA down to a scant 3,348 pounds.  Some diets mods, like fitting a new carbon fiber X-brace over the engine are quite useful.  While others, like replacing the badges with Viper stickers, are a bit more symbolic. 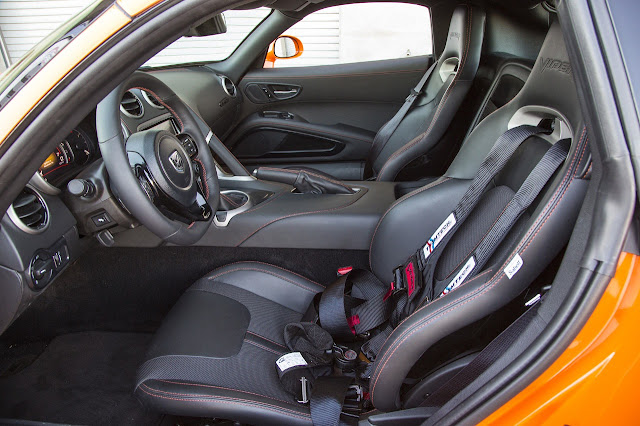 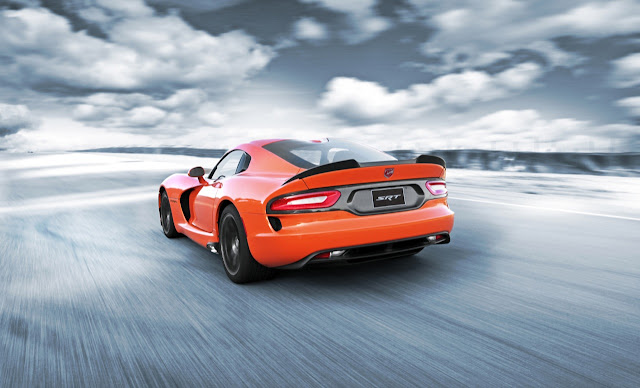 Performance is up.  Sixty miles-per-hour comes in a quick 3.3 seconds and the quarter-mile passes in 11.3 seconds at 129.3 mph.  I wonder what Chevrolet is going to say with the forthcoming Corvette Stingray high performance models.  For the full details, check out the press release below. 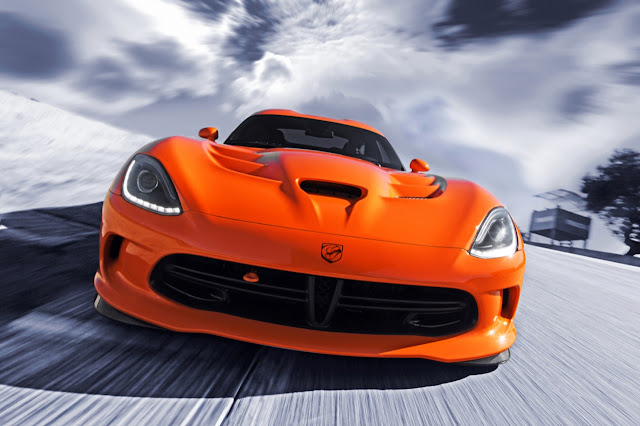 March 18, 2013 , Auburn Hills, Mich. – Configured in-house by the Chrysler Group’s SRT (Street and Racing Technology) team in collaboration with professional road racers, the exclusive, street-legal and single-spec 2014 SRT Viper TA (Time Attack) package is specifically built for the performance enthusiast driver who likes to exercise their machines at the more than 150 road-race courses around North America.
Less than one year since the long-awaited world debut of the new 2013 SRT Viper at the New York International Auto Show, the 2014 SRT Viper TA is set to make its public debut on March 27, 2013 on the same show floor at the Jacob Javits Center in New York City.
Based on the SRT Viper model – the lightest vehicle in the lineup, the 2014 SRT Viper TA package builds upon the legendary on-track capability of the American hand-built supercar using a majority of pre-developed components straight from the SRT stable, that are combined into a carefully balanced package that extract the most out of the Viper ultralow center of gravity, 50/50 weight distribution and largest contact patch in the production car world.
“The new 2014 SRT Viper TA is being engineering for the dedicated track enthusiast, who still wants to drive to the track and take their hobby to the next level” said Ralph Gilles, President and CEO – SRT Brand and Motorsports, Chrysler Group LLC. “We’re re-launching some of the fastest production-built cars that people can buy straight from the factory. Our engineers revised the suspension settings to refocus the Viper specifically for track duty, using a blend of components from the GTS and the SRT models, add in the extensively developed aero package and the new Time Attack package is born. We’re not only saluting the existing capabilities of our current models, we’re also targeting another niche in our customer base with a tremendously capable track machine.”
The suspension on the 2014 SRT Viper TA is uniquely tuned and upgraded specifically for on-track usage and to maximize the performance of the Pirelli P Zero Corsa tires which are mounted on ultra-lightweight, multi-spoke Sidewinder II wheels. A two-mode Bilstein Damptronic suspension system features firmer levels of damping and a smaller spread between modes than what is found on the current Viper GTS models.
Shock dampers, springs and road racing derived stabilizer bars have been retuned for optimal on-track performance. The standard aluminum structural X-brace is replaced with a lighter carbon fiber brace that effectively ties the four corners of the engine compartment together and contributes to the 50-percent increase in torsional rigidity and stiffness across the Viper lineup.
Based on the outstanding performance of the world-class brake system on the 2013 SRT Viper, SRT engineers are working in parallel with Brembo on a system that increases thermal capacity and optimizes heat dissipation providing improved extreme use. The brake calipers on the 2014 SRT Viper TA feature a black anodized finish with the Viper logo shown in Crusher Orange.
The unmistakable exterior of the SRT Viper TA features exclusive Crusher Orange paint with black 2D TA logos behind both front wheels, black Stryker logo on the front fascia and matte black, ultra-lightweight Sidewinder II wheels.
An advanced exterior aerodynamics package includes carbon fiber front splitters and rear spoiler, while a carbon fiber rear applique accentuates the rear width proportions and adds another level of detail.
Under the hood of the 2014 SRT Viper TA is the handcrafted, all-aluminum 8.4-liter, mid-front
V-10 overhead-valve engine. Performance ratings are 640 horsepower and 600 lb.-ft. of torque – the most torque of any naturally aspirated sports-car engine in the world.
Inside, the performance driver-oriented cabin of the 2014 SRT Viper TA uses the same standard premium ballistic fabric racing seats from Sabelt, featuring a lightweight fiberglass shell created by a state-of-the-art resin transfer molding technology for mass reduction and long-term durability. Both driver and passenger seats can also accommodate a 3- or 6-point harness for racing belts.
The standard black interior combination includes unique Crusher Orange accent stitching on the cloth seats, instrument panel (through the cowl), center stack, console, pull brake, shifter boot, shifter head, steering wheel and upper doors.
Curb weight is an estimated 3,348 pounds.
Only 33 units of the 2014 SRT Viper TA in Crusher Orange will be built at the Conner Avenue Assembly Plant in Detroit, beginning in third quarter 2013.
About SRT
The Chrysler Group’s SRT (Street and Racing Technology) brand uses a successful product development formula featuring five proven hallmarks: awe-inspiring powertrains; outstanding ride, handling and capability; benchmark braking; aggressive and functional exteriors and race-inspired and high-performance interiors to remain true to its performance roots.
The SRT lineup in the 2013 model year features five vehicles that are world-class performance contenders and bring the latest in safety technologies and creature comforts. The Chrysler 300 SRT8, Dodge Challenger SRT8 392, Dodge Charger SRT8 and Jeep Grand Cherokee SRT8 are joined by the SRT flagship Viper and Viper GTS models, which are making their highly anticipated return to the high-performance sports car market. 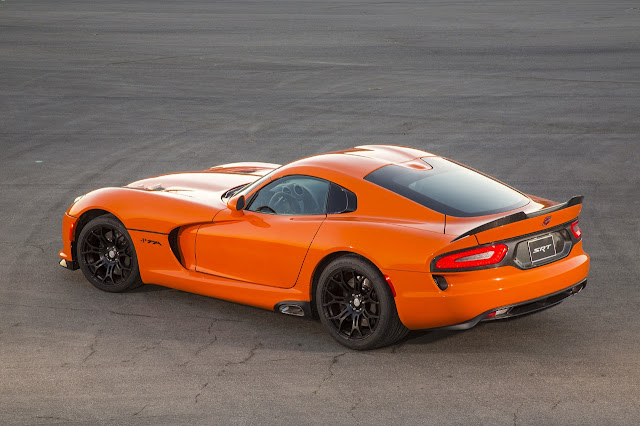 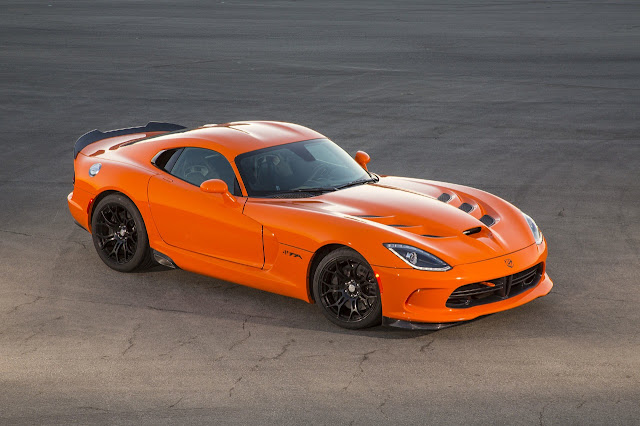 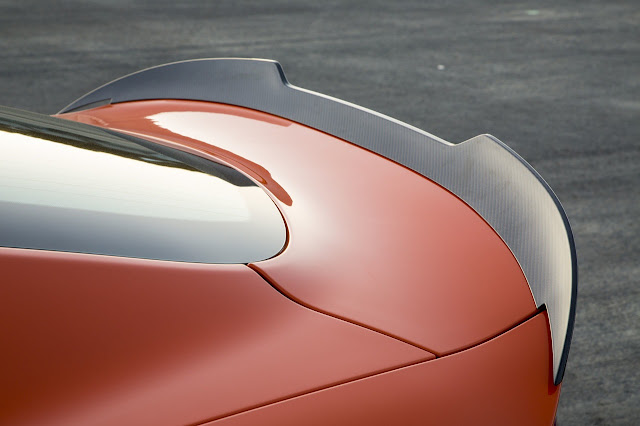 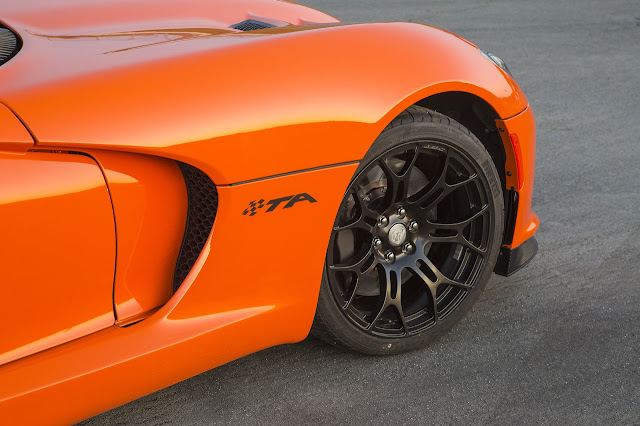 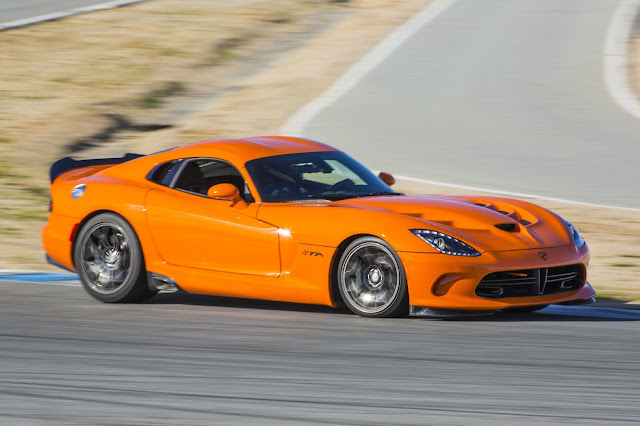 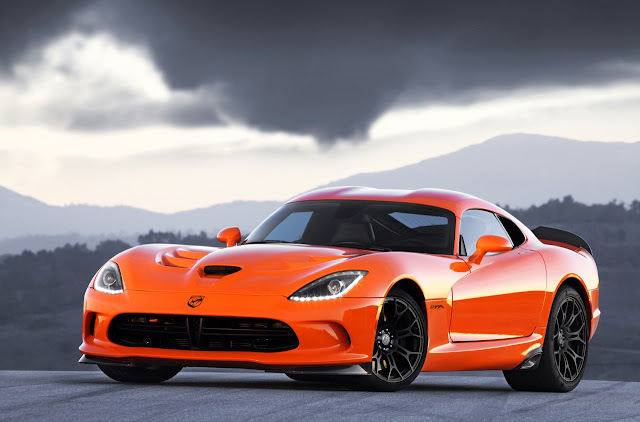