The 40th anniversary Porsche 911 Turbo, aka Ms. Stuttgart 2014, has arrived, and judging by those rear fenders, she has some junk in the trunk… a 3.8 liter, twin-turbo flat-six to be precise.  She may look a lot like the past several Ms. Stuttgarts, but don’t be fooled the 2014 911 Turbo and Turbo S bring a lot to the table. 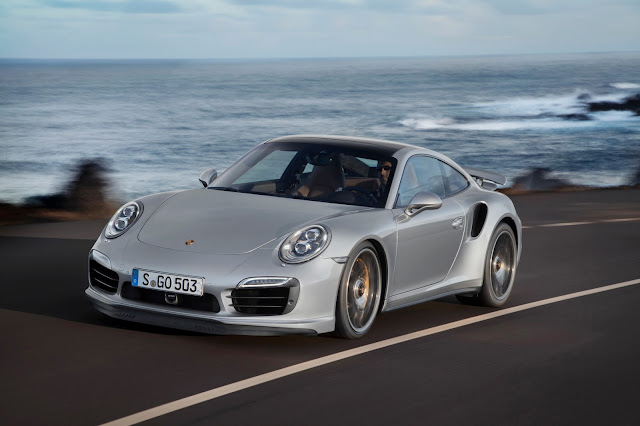 The Turbo will top out at an electronically limited 196 mph; the Turbo S at 198 mph.  Any faster and the tires may burst.  Don’t expect to try and recreate those numbers with a manual gearbox, because there isn’t one.  The 991 Turbo and Turbo S are only offered with Porsche’s 7-speed PDK dual-clutch gearbox.  It’s a sad day when the best 911s, the Turbo and GT3, don’t get a stick-shift option.  It’s the end of an era, folks.  However, with the PDK working in conjunction with a new thermal management system and auto stop/start, the 2014 is the most fuel efficient 911 Turbo, ever. 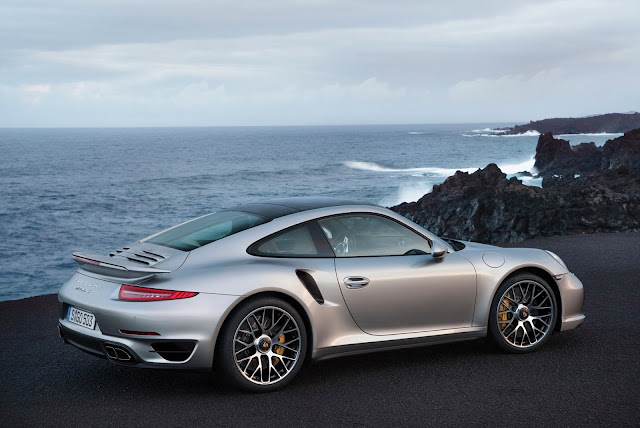 Having that much power and boasting that much speed means you need some serious help in the aerodynamics department.  Traction is key, you see.  Thankfully, both of the 2014 Porsche 911 Turbos create plenty of downforce thanks to a three-stage automatic rear wing and three-stage pneumatically extending front spoiler.  According to Porsche, in full attack mode, the Turbo’s wing & spoiler will shave up to two seconds off of it’s Nürburgring North Loop lap time.  Good gravy.

Add to that a new all-wheel-drive system complete with rear-wheel steering (with up to 2.8 degrees of steering), Porsche Traction Management and multi-plate coupling and you have a car that will seriously attack the corners and leave them begging for their lives.  I’ll let Porsche explain how their rear-wheel steering works:

“The steering angle of the rear wheels can be varied by up to 2.8 degrees, depending on vehicle speed. At speeds up to 31 mph, when the front wheels are turned, the system steers the rear wheels in the opposite direction. This actually corresponds to a virtual shortening of the wheelbase by 9.8 inches, which gives the 911 Turbo unrivalled performance in curves. The system lets the car turn faster into corners and offers more dynamic steering response. This noticeably simplifies maneuvering and parking.

“At speeds above 50 mph, the system steers the rear wheels parallel to the front wheels. This is equivalent to a virtual lengthening of the wheelbase by 19.6 inches and gives the car tremendous directional control capability. At the same time, the steering input by the driver leads to significantly faster build-up of lateral force at the rear axle, which responds to steering commands even more quickly.”

Porsche claims that the 2014 911 Turbo S will tackle the Nürburgring Nordschleife in “well under 7 and a half minutes — with standard production tires”.  That puts it tantalizingly close to the 7:25 achieved by the Carrera GT.  This may be the fastest track Porsche yet.

Let’s talk about stopping.  Standard brakes are 15 inch disks all around.  Step up to the optional brakes and you get 16.1 inch ceramic brakes up front and 15.4 inch out back.  The Turbo gets four-piston monoblock calipers and the Turbo S gets six-piston. 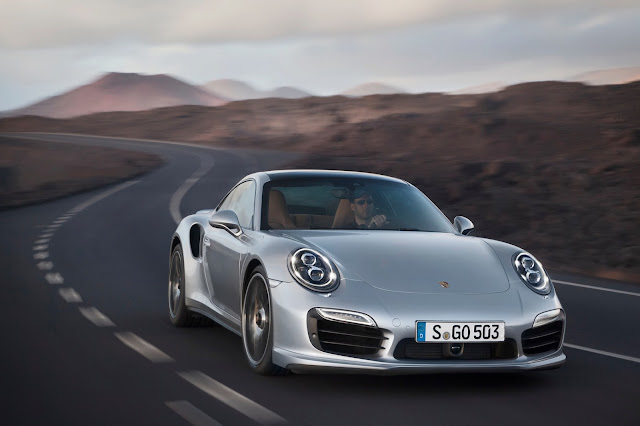 The 991 Turbo is wide.  Very, very wide.  Some may say too wide.  The 991 Carrera 4 is 1.7 inches wider than the base 911.  The Turbo is another 1.1 inches on top of that, making it 73.9 inches wide.  To give you some reference, a Range Rover Sport is 76.1 inches wide.  Like I said, wide.  It’s width may actually detract from some of its everyday usability, especially in particularly tight parking lots.

The 991 Turbo looks a lot like the 997 Turbo and the 996 before it.  The subtle styling changes that separate the 991 from the 997 carry through in the Turbo with the Turbo S getting its own pair of LED headlights.  Both cars run on 20 inch wheels shod in sticky tires, 45/35ZR20 in the front and 305/30ZR20 at the rear.  The interior is new.  You get optional toys like 18-way adjustable sport seats with memory, a Burmester sound system, radar-controlled cruise control, camera-based road sign recognition and speed limit recognition.  Speed limit recognition could be really useful, or, if you don’t care about speed limits and are like most Porsche Turbo owners, really annoying. 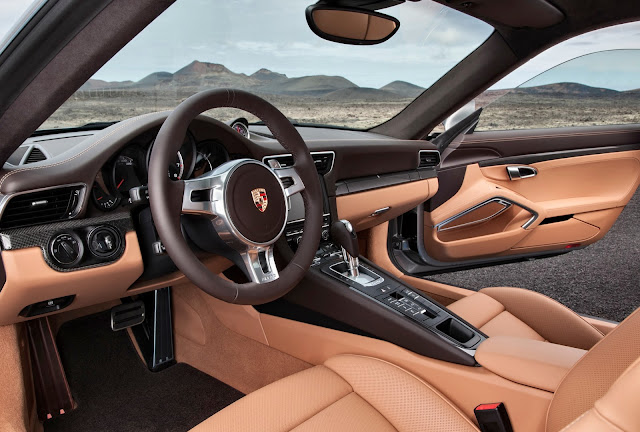 Porsche 911s, Turbos included, have never really stirred my soul or inspired me like other cars.  I don’t really understand the fanaticism surrounding them.  I’d prefer a Nissan GTR, Aston Martin Vantage, Chevy Corvette Stingray PLUS an Audi RS6, Lotus Exige PLUS a BMW M5, or a Lamborghini Gallardo.  That being said, I have no doubt that this car will be a blast to drive and a beast on the track.  Porsche is very, very good at making the 911.  For all the rest of the details, check out Porsche’s press release below the gallery. 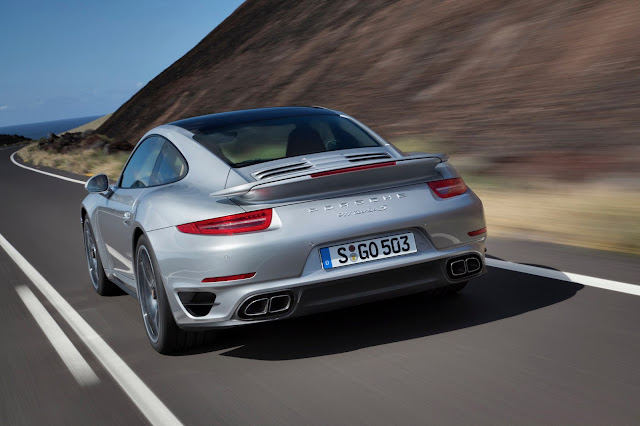 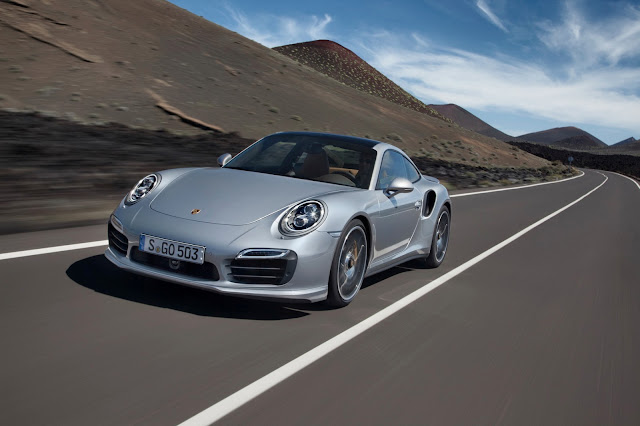 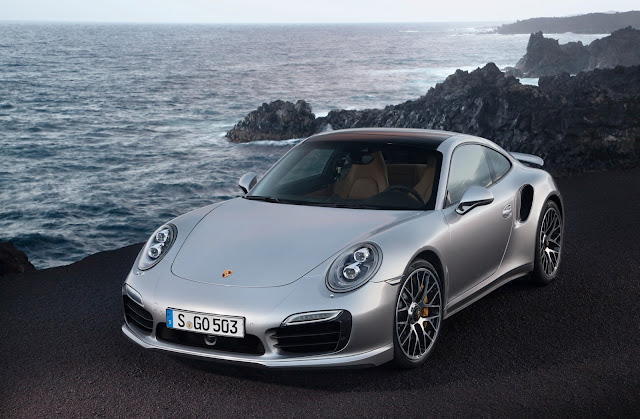 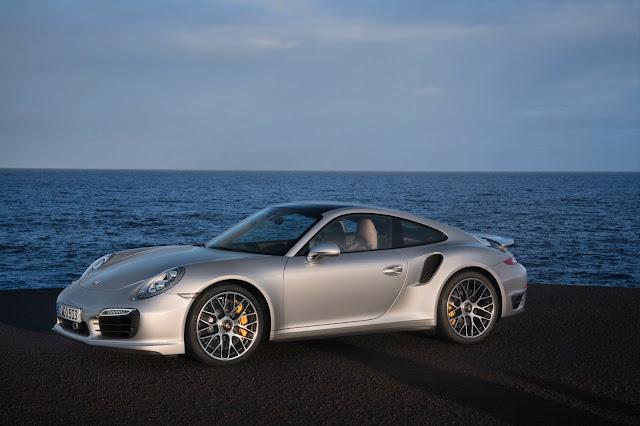 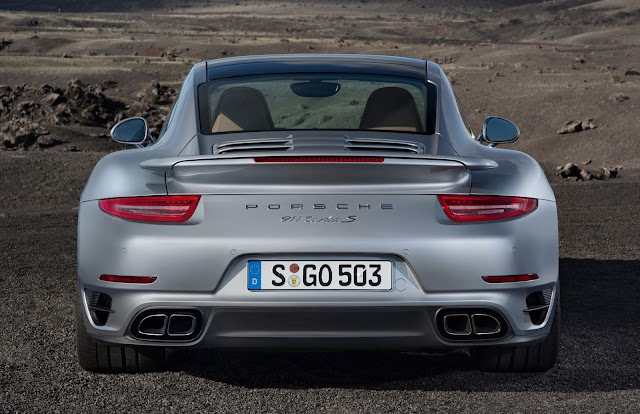 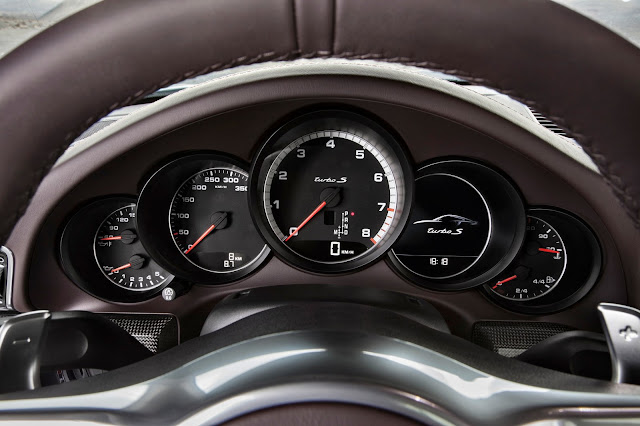 Porsche 911 GT1: The Standard by which All