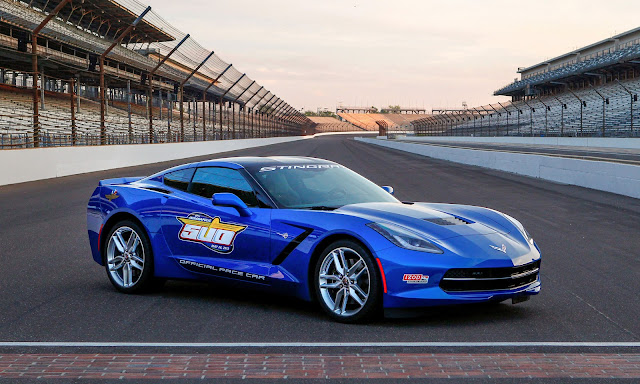 For the 12th time a Chevrolet Corvette will be the Pace Car for the Indianapolis 500.  The 2014 Corvette Stingray will be leading the pace lap of the 97th Indy 500 on May 26th.  This shouldn’t come as too much of a surprise as this is the 17th consecutive year that a General Motors car has sported the flashing yellow safety lights.  And, the new ‘Vette is certainly the highlight of the Chevy lineup. 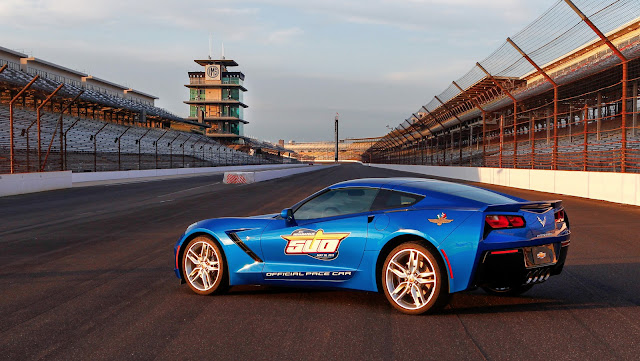 This Corvette Pace Car is essentially stock and, not to mention, gorgeous.  It sports factory Laguna Blue pain and the requisite decals.  Hopefully we’ll see an Indy 500 Pace Car trim package in GM dealers soon.  Until then, enjoy the photos. 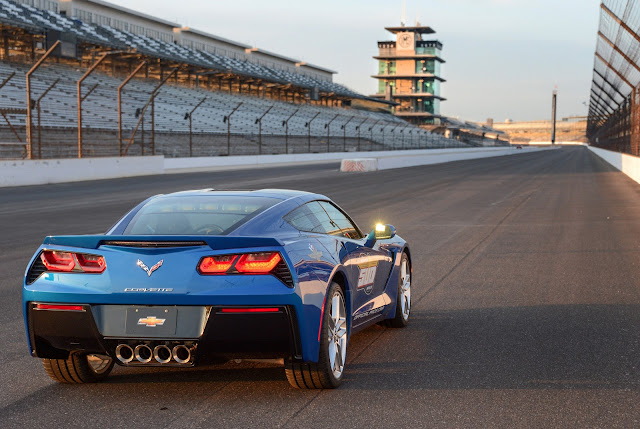 INDIANAPOLIS – The all-new, seventh-generation 2014 Corvette Stingray will serve as the Indianapolis 500 Pace Car, leading the field to green at the start of the 97th running of “The Greatest Spectacle in Racing,” on Sunday, May 26, at Indianapolis Motor Speedway.
It marks a record 12th time the Corvette has served as the Pace Car, starting in 1978.
“It is an honor to help inaugurate the all-new Corvette Stingray at the hallowed Brickyard and further the legacy between Chevrolet and the Indianapolis 500,” said Jim Campbell, GM vice president of Performance Vehicles and Motorsports. “The 2014 Corvette Stingray’s performance was influenced by racing, making this prestigious assignment even more fitting.”

Along with Chevrolet’s return in 2012 as an engine supplier, the Corvette Stingray Pace Car extends a legacy at the Brickyard that dates to the racetrack’s early days.
“Chevrolet is a great partner of the Speedway,” said Jeff Belskus, Indianapolis Motor Speedway Corporation president and chief executive officer. “That connection is heightened this year with the next-generation Corvette in front of a very talented field of racers.”

Decked out in Laguna Blue Tintcoat with official Indianapolis 500 graphics on the doors, the Corvette Stingray Pace Car differs from production models with only track-mandated safety features and strobe lights. No powertrain upgrades are required to run in front of the IndyCar pack, thanks to its all-new 6.2L LT1 engine, which features advanced technologies including direct fuel injection, continuously variable valve timing and Active Fuel Management (cylinder deactivation). They help produce an estimated 450 horsepower more efficiently.

The 2014 Corvette Stingray coupe goes on sale this fall, with a convertible model – featuring a fully electronic top that can be operated remotely with the key fob – coming a few months later. Vehicle highlights include:

Founded in 1911 in Detroit, Chevrolet is now one of the world’s largest car brands, doing business in more than 140 countries and selling more than 4.5 million cars and trucks a year. Chevrolet provides customers with fuel-efficient vehicles that feature spirited performance, expressive design, and high quality. More information on Chevrolet models can be found at www.chevrolet.com.

2014 C7 Corvette: My Most Anticipated Reveal of