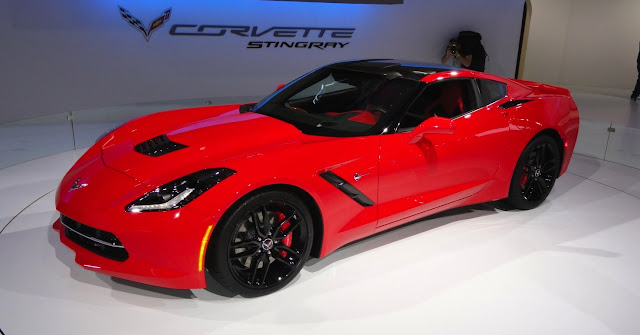 Annnnd, now we know that the 2014 Chevrolet Corvette Stingray is good for up to 30 mpg.  Notice I said up to 30 mpg.  The Corvette Stingray gets an EPA-estimated average 17 miles-per-gallon in the city and 29 on the highway among the various driving modes.  Switch on the Tour mode and you’ll get 28 mpg highway, and Eco delivers 30 mpg highway.  We won’t talk about Track mode.

Chevy claims that at 30 mpg, the Corvette Stinrgay is the most fuel efficient sports car on the market.  I guess that all depends on their definition of “sports car”.  The Detroit Electric SP:01 is pretty efficient.  But, whatever.  Either way, 30 mpg is a serious number for a 455 hp to 460 hp V8 supercar.  Just how serious?  To give you a reference, here are a few fuel efficiency-to-horsepower-to-price-to-0 to 60 comparables… 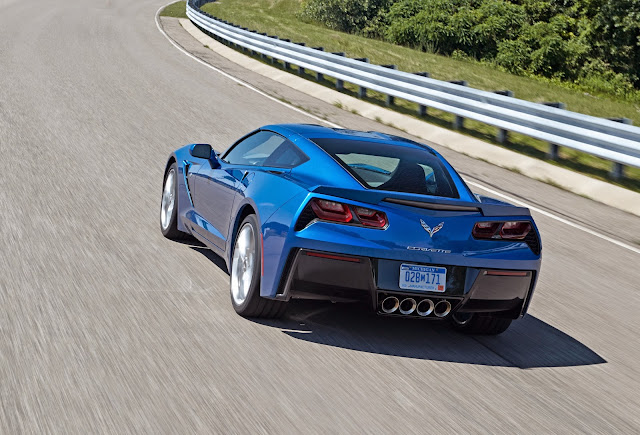 Press Release
Corvette Stingray Most Efficient Sports Car on the Market
-No other car can match the 2014 Corvette Stingray, which delivers 455 horsepower and an EPA-estimated 29 mpg highway
DETROIT – The 2014 Corvette Stingray will deliver up an EPA-estimated 17 miles per gallon in the city, and 29 mpg on the highway. This makes the new Corvette Stingray the most fuel efficient sports car on the market, as no other car offers more than more than 455 horsepower and greater than 29 mpg highway.
“The Corvette Stingray establishes the benchmark for modern performance cars by using technologies to deliver more performance and more miles per gallon,” said Tadge Juechter, executive chief engineer for the Corvette. “We expect more and more performance cars will follow Corvette’s example.”
The EPA estimate of 17 city and 29 highway is for the Corvette Stingray equipped with an all-new, seven-speed manual transmission. The estimate reflects an average of fuel economy in both the default “Tour” mode (which delivers 28 mpg highway) and driver-selectable “Eco” mode (which delivers 30 mpg highway). For Stingrays equipped with the seven-speed manual transmission, Eco mode enables Active Fuel Management, which disables four of the cylinders during light engine loads for improved fuel economy.
For Corvette Stingrays equipped with the six-speed automatic, Active Fuel Management is active in all drive modes until the driver engages the manual-shift mode using the steering-wheel paddles. Fuel economy estimates for Corvette Stingrays equipped with the six-speed automatic will be finalized soon.
Significantly, the all-new Corvette Stingray is more fuel efficient and more powerful. The highway rating represents an 11-percent increase in fuel economy over the previous Corvette, while the all-new 6.2L LT1 V-8 delivers 455 horsepower, a 6-percent increase over the previous Corvette (the LT1 delivers 460 horsepower with the available dual-mode exhaust).
By comparison, the Porsche 911 Carrera S delivers 400 horsepower, and an EPA-estimated 27 mpg highway.
Sports cars with more than 455 horsepower typically offer significantly lower highway fuel economy estimates than the Corvette Stingray. For example, the Jaguar F-Type S offers 495 hp and 23 mpg highway while the Audi R8 V10 offers 510 hp and 19 mpg highway.
Sports cars that deliver more than 29 mpg highway based on EPA estimates typically deliver significantly less engine output. For example, the Porsche Cayman offers 30 mpg and 275 hp while the BMW Z4 sDrive28 delivers 34 mpg and 241 hp.
The 2014 Corvette Stingray coupe goes on sale this fall, with a convertible following by the end of the year.