Classic American Muscle Cars and Hot Rods are a beautiful, beautiful thing, especially against the back drop of the Atlantic Ocean on a clear May day.  If you’re reading this article, you probably agree with me.  So, you can imagine my delight in attending the 2013 Fort Lauderdale Great American Beach Party car show on Fort Lauderdale Beach.  The Great American Beach Party is a car show for (you guessed it) American muscle cars and hot rods that takes place every year on Memorial Day weekend.  And, this year some amazing cars were out to play. 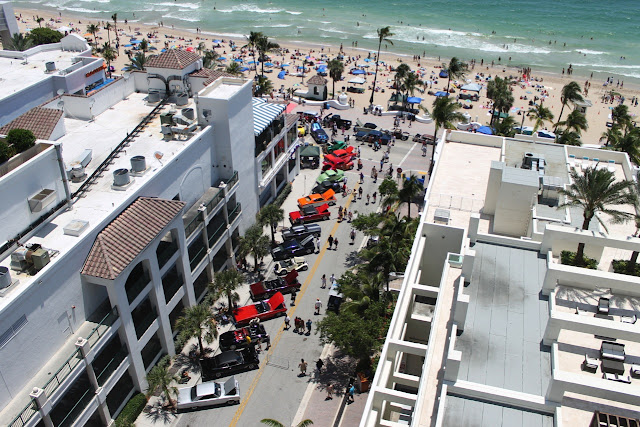 I went a bit camera-happy, so be sure to check out the pics in the slide show.  Before that, though, there are a couple of cars that really stand out.  My Bests in Show, if you will.  The categories are: Best Classic Car: Unmodified, Best Classic Car: Tuned, Best Hot Rod, Best Street Rod, Best Pro Street, Best Dressed Engine, Best Franken-Car and Best… Wait, WTF?. 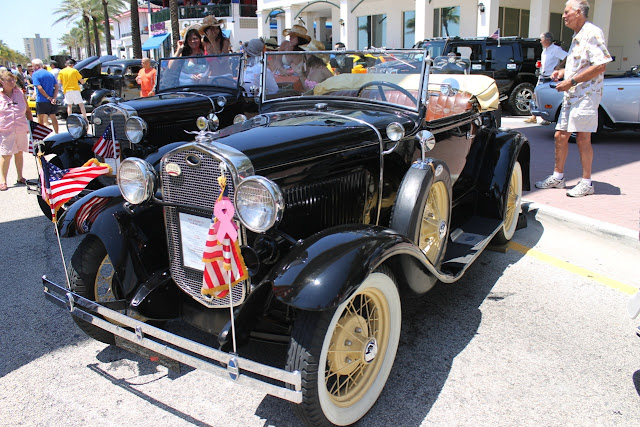 In an event surrounded by Hot Rods and modded quarter-mile beasts, it was a very pleasant and somewhat unexpected surprise to come across this 1931 Ford Model A Deluxe Roadster.  This car is an original example of a beautiful car from a bygone era. 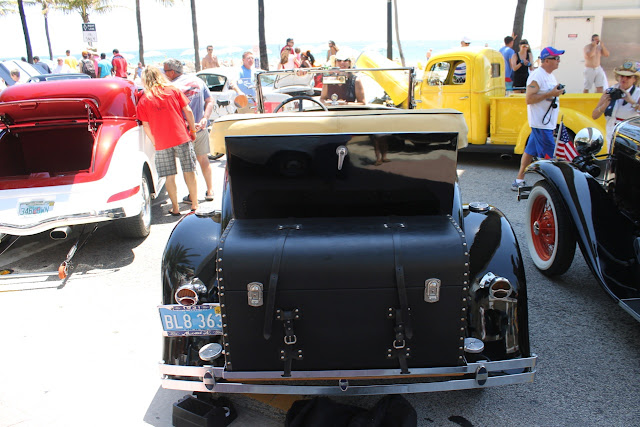 Best Classic Car – Tuned
In the Best Modded Classic Car Category, I was torn between a 525 horse 1962 Chevrolet Corvette and a 455 horse 1968 Chevrolet Camaro SS.  Decisions, decisions.  But, this is my blog, so I chose both.  Yep, we have a tie.

1962 Chevrole Corvette
First up is Bradley Krause’s 1962 Chevrolet Corvette.  When Mr. Krause bought this ‘Vette about a year and a half ago, it looked like this: 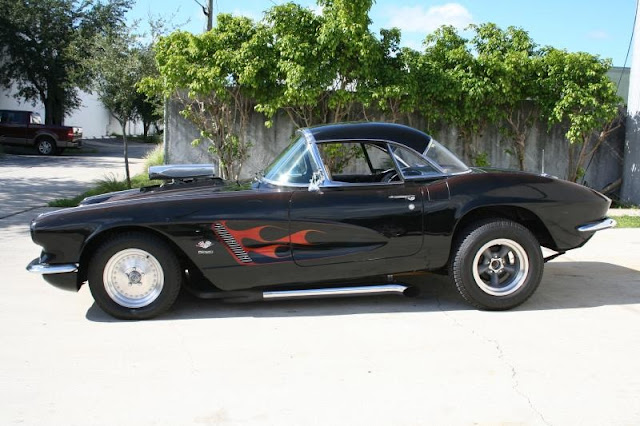 After an extensive frame-on restoration and some serious mods, it looks like this: 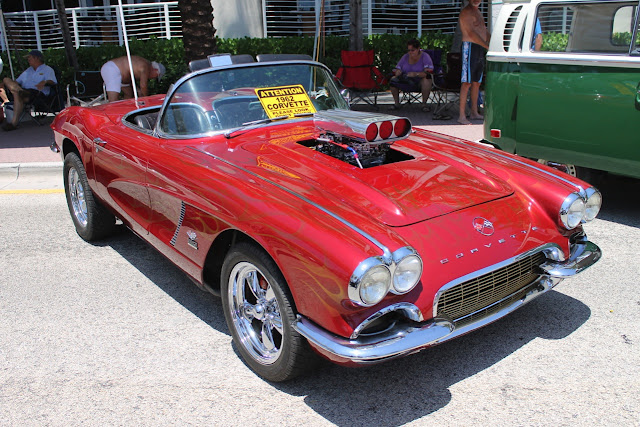 Nice, huh… I don’t care how close you look, you’re not going to find a single blemish on this paint.  As a matter of fact, it just got out of the paint shop last night.  See those flames, the mystic color changing paint runs a shade under $400 an ounce.  It’s very well done and worth every penny. 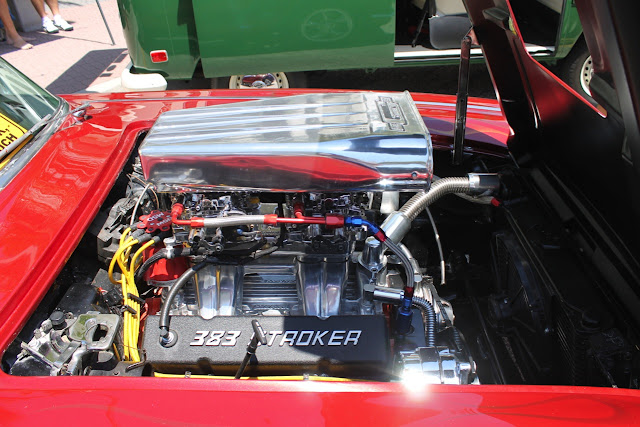 Under (and partly sticking out of) the hood is a small block Chevy 383 Stroker with aluminum head and a fully forged bottom end by Proformance Unlimited out of Freehold, New Jersey.  All-in-all-done this ’62 ‘Vette boasts 525 horse and 500 pound-feet of torque.  To handle all that oomph, Mr. Krause fitted a 4:11 rear end and all-new drive-line.  That much power with a 1962 Corvette’s drum brakes would scare the crap out of me.  So, I guess it’s a good thing this car is fitted with new Wilwood cross-drilled and vented disk brakes at all four corners. 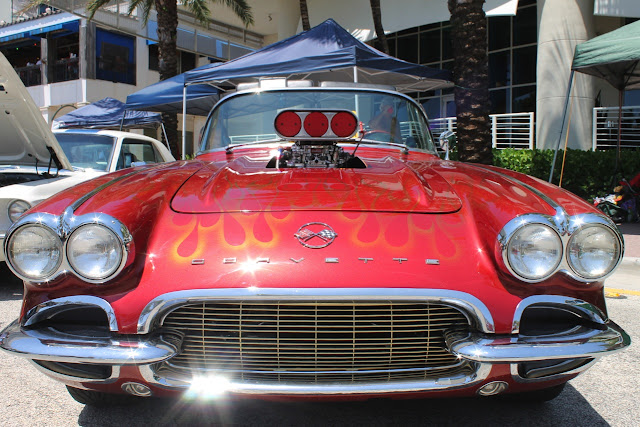 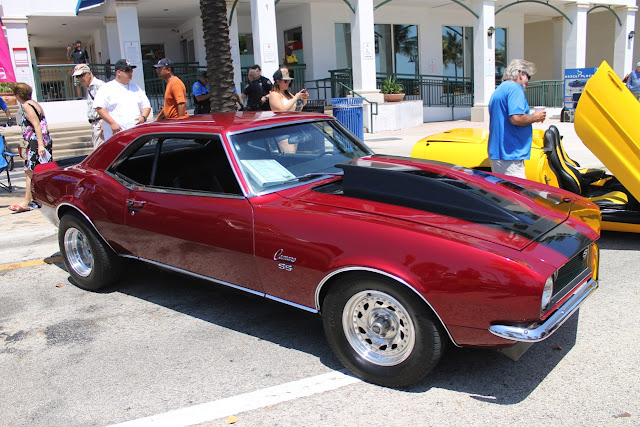 This is Chuck Witt’s 1968 Camaro SS.  It has a 427 V8, a M-22 Rock Crusher 4-speed trans with Hurst Competition Shifter, a 9 inch Ford rear-end with 3:89 Detroit Locker Nodular case and 455 horses.  It also has 3 inch stainless exhaust all the way back, Hooker Super Comp Ceramic-Coated Headers and an exhaust note that will scare small children and wildlife. 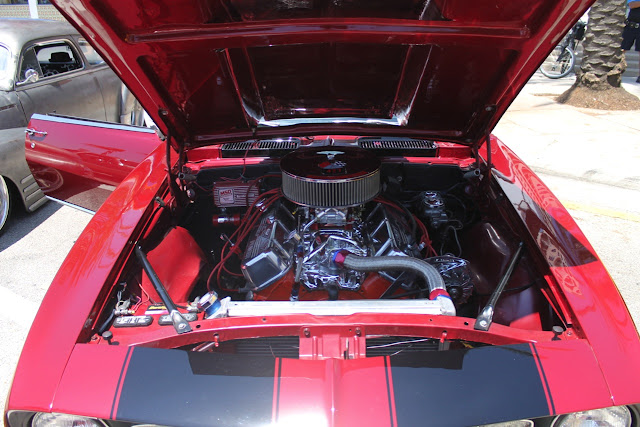 The paint is nearly perfect, as is the engine bay.  Inside, well, who doesn’t love a bright white Hurst shift-knob?  Let’s just say, Mr. Witt has built himself quite the Camaro.  Keep your 2014 Z28, I’ll take this. 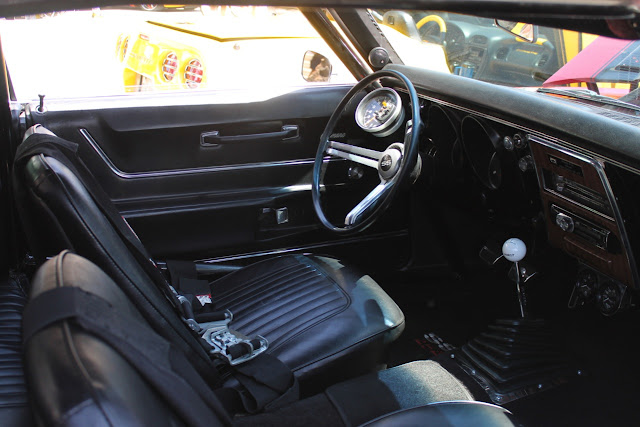 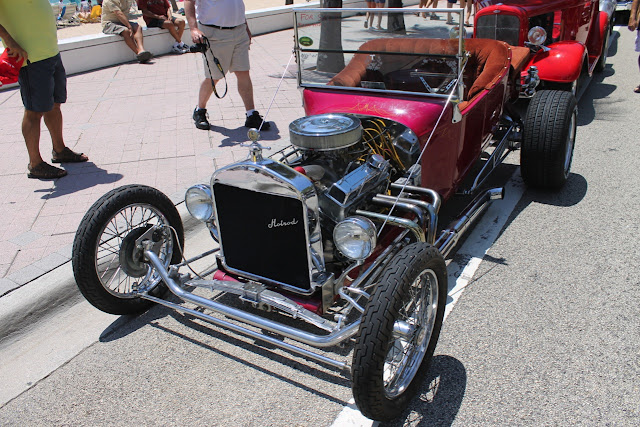 The ever-lovely T-Bucket Hot Rod.  No car show is complete without one.  And, this 1923 Ford Model T-based “23T Roadster Pickup” is as good an example as one can find, especially for a street-driven car.  What’s the point of having a kick-ass Model T Hot Rod if you don’t drive it?  Sure, there are others out there with shinier chrome and a dressier engine, but not many have this car’s personality.  This isn’t just a show car, this car is driven and loved. 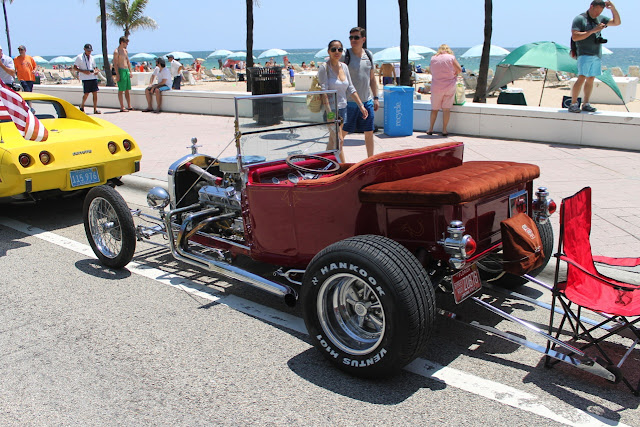 The 23T Roadster Pickup is powered by a 335 cu.in. Chevrolet V8 with a Crane camshaft, forged pistons and Fuelie heads.  Power is put to the 1957 Oldsmobile Positraction 3.36 rear end through a Turbo 400 Transmission with a B&M shift kit.  Oh yeah, it also has a wheelie-bar and drag-chute. 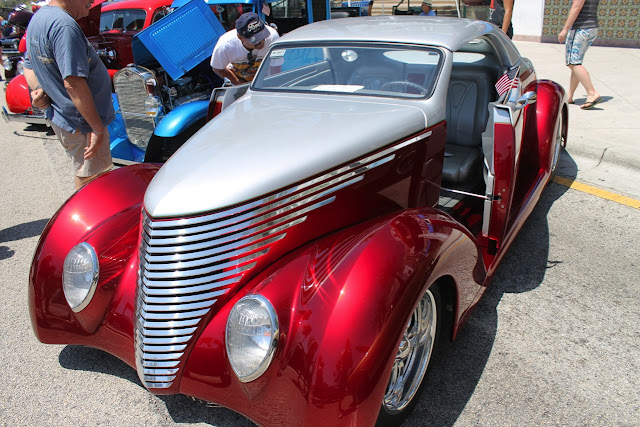 This is probably the most beautiful car at the Great American Beach Party.  I mean, it’s perfect.  This 1937 Ford Custom Cabriolet was built about five years ago by famed street rod builder Don Baumgartner of Roanoke, Virginia, so it better be. 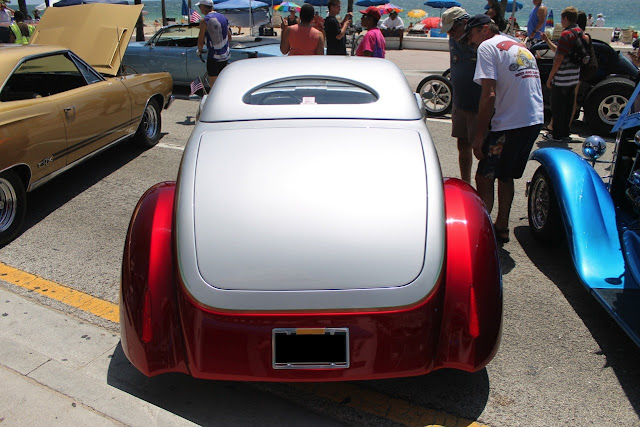 A Minnotti Fiberglass body covers a new, fully boxed frame and 9 inch Ford rear-end.  Under that chrome-slatted and polished Orion silver and Candy Brandywine hood is a (suspiciously not-Ford) 355 horse GM ZZ4 long-block 350 cu.in. crate V8 whose power is routed through an automatic trans with only 1,200 miles on it.  I don’t know if I would want to take this car around the Nurburgring, but it’s good to know that I might actually survive a lap as this 1937 Ford is fitted with disk brakes at all four corners, an independent Ford Mustang II suspension with ladder bars and coilover shocks. 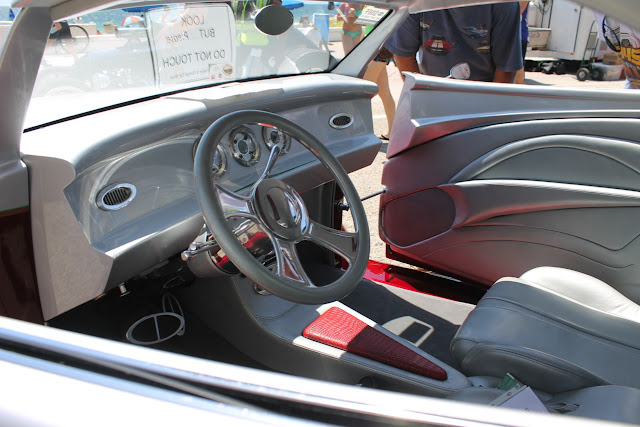 Open the twin suicide doors, you get a vintage air conditioning system (which I’m sure is actually a selling point), in-dash DVD and a fully custom interior. 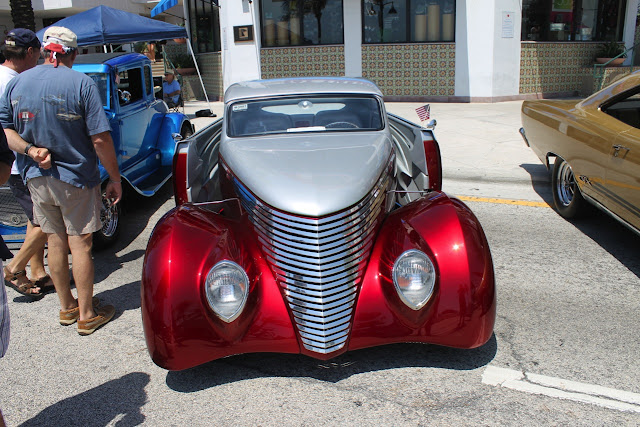 Sherwin Kiesshauer’s 1971 Pro Street Dodge Demon is by far the best use of a Dodge Dart I’ve seen in a long, long time, if ever.  Actually, let’s go with ever.  It’s about as far from a ’74 Dart Hang Ten as you can get. 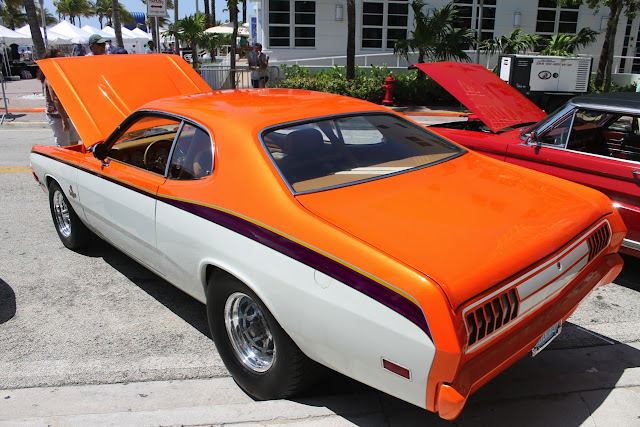 In addition to a roll cage, massive rear tires and a white, orange and purple paint scheme, what does this particular Dodge Dart Demon have to offer?  Well, to begin with, it’s powered by a bored and stroked 440 V8 with Bo Laws 980 Holley carburetors good for 600 horse and 491 pound-feet of torque.  Add to that a 4:56 Dana Trac-Lok rear-end, TCI 727 Automatic trans with a B&M Quicksilver shifter and a svelte 2,850 pound curb-weight and you have a screamer of a Demon.  Did I mention is has NOS?  No?  Oh, sorry.  It has nitrous, too.  See the little red button on the shift lever that screams “PUSH ME!”.  Yeah, NOS. 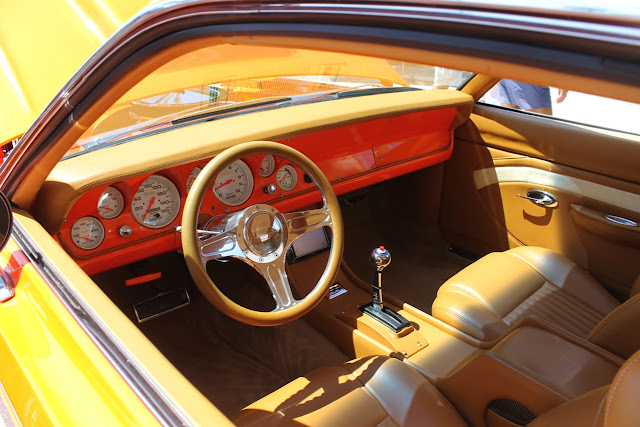 Inside you’ll find a custom interior with Phantom racing gauges mounted in a custom orange dash.  The Pioneer audio system just feels a bit out of place.  But then again, why not? 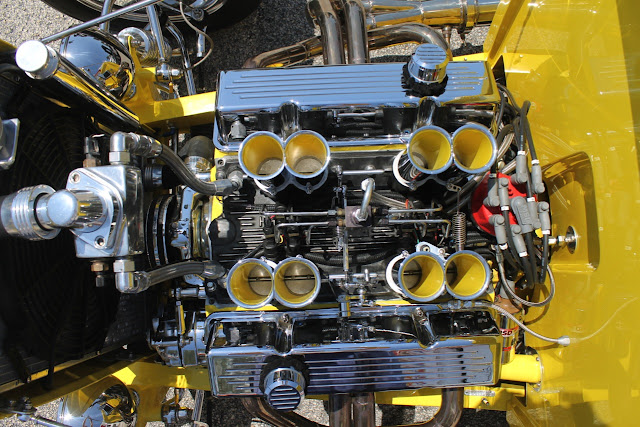 I don’t know much more about this particular car other than it’s a Ford Model A Coupe Hot Rod and it has the most spectacular engine and engine compartment I have ever seen.  Just look at those velocity stacks. 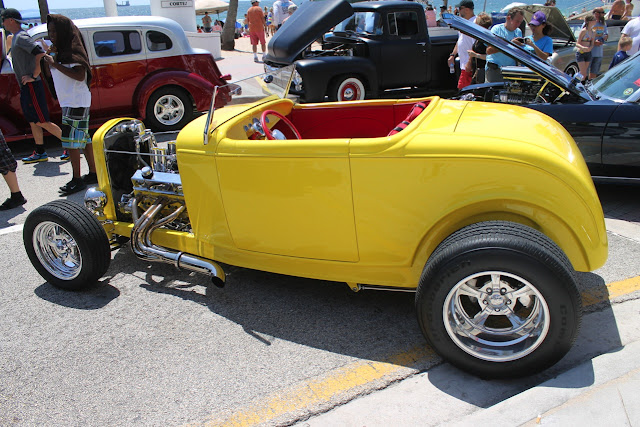 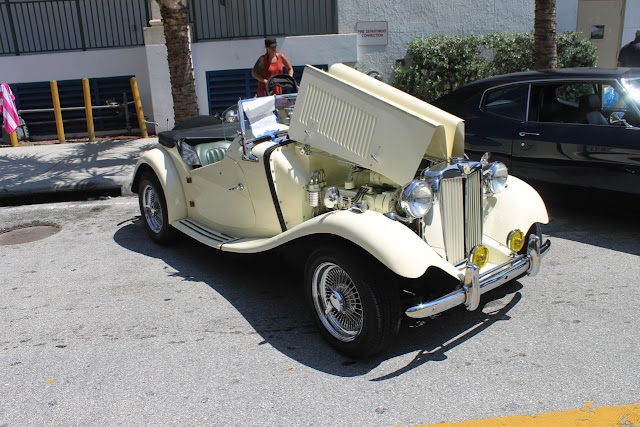 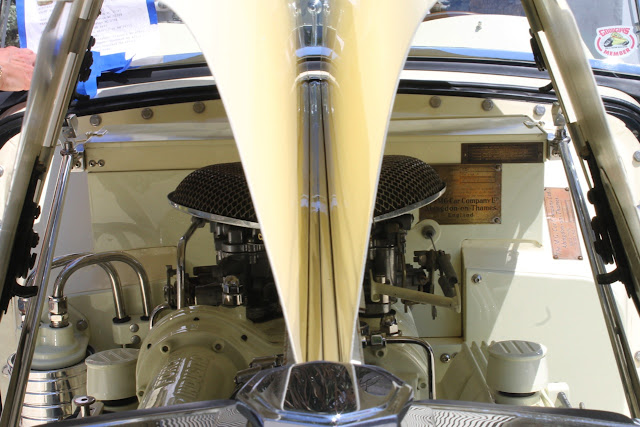 Seriously, who comes up with this?  I can just imagine two guys sitting down with cups of tea spiked with Jack Daniels saying: “You know what would be fun, let’s take an old MG TD, rip out the 54 hp, 1.4 liter 4-banger and put in a big-ass Buick V8 that weighs more than the entire car.  Yep, that would be fun.”  Well, however they came up with the idea, here it is in all it’s power-happy glory. 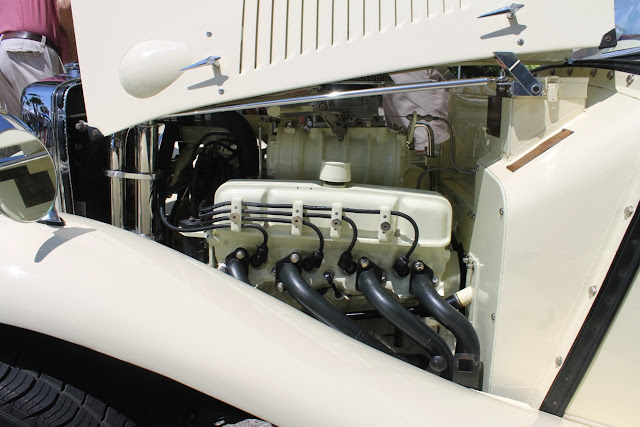 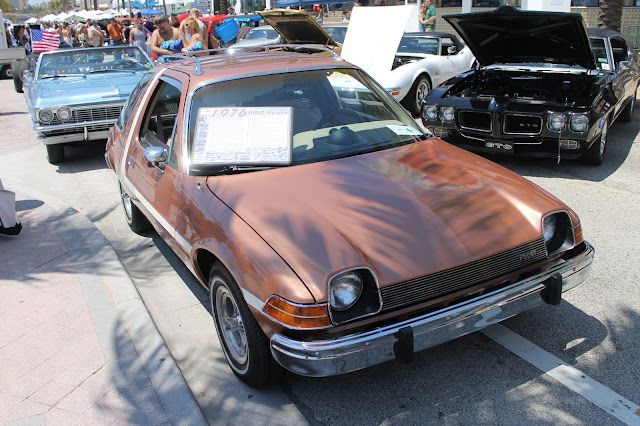 Why a 1976 AMC Pacer DL?  Well, just because.  This Aztec Copper example with light tan and “Darth Vader black” interior is a gem of a Pacer (if there is such a thing).  After buying this car in 2009, the current (and third) owner completely restored the car and boosted the original 258 cu.in. straight six by 40 horse in the process. 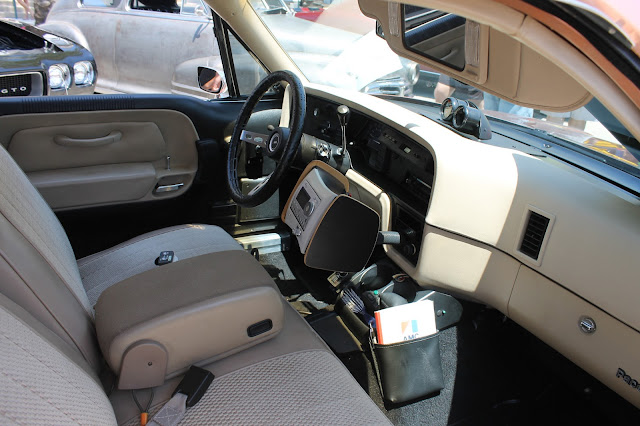 This isn’t exactly your stock restoration job, just look at the robot head-looking thing with the XM Radio unit.  But, it is pretty cool.  You don’t often find Pacers with this much attention put into them, and, for that, this is my Best… Wait, WTF?.  If you want to see everything that was done to the this car, here is a photo of the build story. 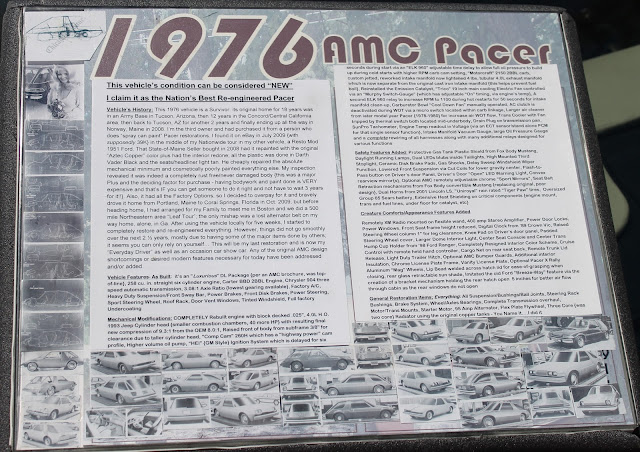 These are just my 2013 Fort Lauderdale Great American Beach Party car show Best ofs.  But, they are by no means the only spectacular cars.  Be sure to click through the gallery below to see some more unbelievable cars.  It’s worth it.

Innotech Aspiron: Trackday Car with the Heart of